How to Be Charismatic: The 9 Habits of Insanely Likable People

Whether working in sales or support, the best reps know how to be charismatic. When these team members walk into a meeting or join a call, they immediately put customers at ease with their conversational tone and genuine demeanor. 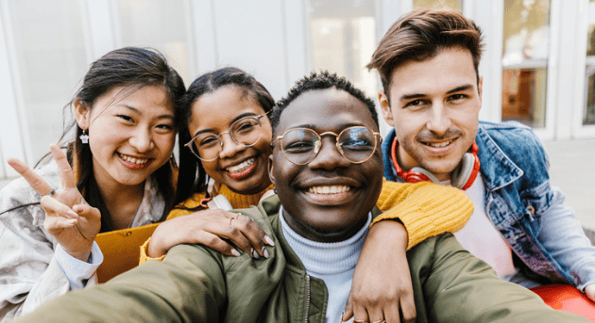 While some people are naturally charismatic, instant likeability doesn’t come easily for everyone. For the reps who are on the more introverted side or maybe even new to a management role, rest assured that charisma is something that can be learned, according to a study from the Academy of Management.

To better understand exactly how to be charismatic, let’s take a look at the habits of the most likable, charismatic, and charming people.

1. They have positive and negative empathy.

The ability to connect and form relationships is something that comes easily to charismatic people. And the underlying characteristic of strong relational skills? Emotional intelligence (EQ). EQ is an essential characteristic for those who work directly with customers. Research from TalentSmart EQ found that 90% of top sales performers are high in emotional intelligence.

EQ is often demonstrated in someone’s ability to be empathetic, whether positive or negative.

Positive and negative empathy is the ability to put yourself in someone else’s shoes and genuinely feel what they are feeling — either good or bad.

People who possess positive empathy don’t get jealous, they get excited. They are thrilled when:

Negative empathy is the ability to comfort others when they’re down. People who possess this trait will:

Want to see where you stand when it comes to EQ? Take this free emotional intelligence quiz from the University of Berkeley-California.

People who are genuinely enjoyable to be around are humble, not arrogant. They don’t wave awards in people’s faces. They don’t name-drop for the sake of sounding important. They don’t toot their own horns. They don’t act like they’re above any person or situation.

Of course, it’s healthy to be confident and sustain high self-esteem. 98% of workers say they perform better when they feel confident, according to a survey from Indeed.

But there’s a fine line between confidence and arrogance. And the difference is humility. It separates those enjoyable to be around versus those you can’t stand.

If you’re not sure how exactly to practice humility, watch it in action by observing the patterns of humble people. Consider the following:

Take these characteristics into account when you’re talking to a customer, a colleague, or your team.

Brené Brown, a social psychologist with over 10 years of experience in studying vulnerability, famously spoke about the topic in one of the most-watched TED Talks of all time at over 57 million views:

Vulnerability is uncertainty. It’s putting yourself out there to risk embarrassment or judgment. That definition can become foggy, so here are a few examples:

Let’s be clear — being vulnerable isn’t easy. It’s one of the most emotionally challenging hurdles one can face, overcoming the fear of being judged or criticized.

Yet incredibly likable people aren’t afraid to open up. They don’t seek approval from others and have no desire to come off as a perfectionist. Furthermore, they realize that those who do appear as perfect may actually be less likable.

When someone appears perfect, we distance ourselves from them. When they appear flawed, we’re attracted to them. This psychological phenomenon is known as The Pratfall Effect.

In the workplace, by making a mistake, or admitting to a mistake, we become more likable. The 1966 study proves that people connect with those who admit their flaws, versus those who appear as perfect all the time.

4. They have a sense of humor.

Now don’t you just like Old Spice a little bit more after watching that?

In a study conducted by the American Psychological Association, people who were exposed to humorous ads for low-cognition products were vastly more likely to purchase the product.

But here’s the crazy part — people HATE ads. So if ads alone can make someone smile, surely so can another human.

It seems obvious, but people who are enjoyable to be around genuinely have a great sense of humor. Plus, to tie back to our last point, humor is also connected to vulnerability.

One study suggests that discussing shortcomings and mistakes with humor can increase social support from colleagues. Simply put, there are very few downsides to having a sense of humor, especially if you want to be likable.

We’re all guilty of being distracted. Our phones vibrate or the ping of an email goes off, and our attention is immediately drawn to that tiny screen — even if we’re in the middle of a conversation. As a result, we’re distracted from what’s in front of us. This makes it seemingly impossible to have a productive conversation or give customers or team members our full attention. Similarly, it’s difficult talking to someone who is completely tuned out of a conversation.

But the benefit of being present is that it can build a connection and improve your likeability easier than you’d think. A study found that people felt more connected to their conversation partners when the partner responded quickly to them. When you work in service, showing that you’re present can be demonstrated not only in your verbal communication but in your non-verbal communication like body language, as well.

If you struggle to be present, one method to try out is meditation. I’m not the first (or last) to preach about the powers of meditation. These successful people also practice meditation:

That means they don’t hold a chip on their shoulder when dealing with someone who is “under” them. They are genuinely interested in what EVERYONE has to say. They want to hear their story.

This quote from Robert Brault sums it up well:

Whether talking to a customer or getting to know a new teammate, showing genuine interest in getting to know will go a long way in the relationship — and in how likeable you come across.

Guess what the favorite topic of conversation is for a social narcissist? Themselves.

They want to talk about their stories. Their problems. Their successes. Their complaints. Their family. Their friends.

45 minutes later, it’s time to split ways and they haven’t once asked about the other person’s past, present, or future.

Instead of focusing about how amazing (or terrible) their lives are, likable people ask questions. They dive deep into the minds of the person they’re talking to.

Not only do they touch on surface-level, small talk questions such as where are you from? Or what do you do? Or how about that weather today? But they dive deep, asking open-ended questions, uncovering the emotions and motivations of people.

Getting stuck in a conversation with a customer? Or maybe it feels like a dead-end? Try asking open-ended questions:

You’ll be surprised how far a conversation can go when the “yes/no” questions are avoided.

8. They are generous and altruistic.

According to Adam Grant, an organizational psychologist, best-selling author, and professor at Wharton School of Business, there are three types of people:

Grant further explain the three types in his book, “Give and Take: A Revolutionary Approach to Success.”

When you work in customer support, the ability to tap into The Giver can reap benefits for both you and your company.

According to a consumer survey by TCN, 60% of respondents said one of the most important qualities of a customer service agent is their “willingness to help” while 54% said “having a compassionate attitude” was important.

Bottom line: Being generous and compassionate is a sign of someone who’s likeable and knows how to be charismatic.

9. They reciprocate praise (and take blame).

When a likable person is praised for their work, they typically have a response like this:

Thank you so much! However, I’d like to emphasize that this was a team effort. I played only one small role in hitting this goal. Jen, Sam, Mike, and Kelsey…you were all crucial to making this happen. And we couldn’t have done it without you.

In other words, they give credit where credit is due. When they’re recognized for a success, they shift the praise toward everyone else. They give praise and empower people without expecting anything in return.

Conversely, when shit hits the fan, they aren’t afraid to take the blame. If you want to be charismatic, then knowing how to address your mistakes in a pragmatic way is essential.

Was a project screwed up that you had a part in? Or did you directly mess it up? Follow the step-by-step process to come across more likeable:

As a quick summary, here are the 9 habits of insanely charming and charismatic people:

4. They have a sense of humor

8. They are generous and altruistic

9. They reciprocate praise (and take blame)

Editor's note: This post was originally published in [Month Year] and has been updated for comprehensiveness.