Cold Calling: What It Is & How to Do It Right

Cold calling — a staple of several (if not most) sales org's operations that's every bit as frustrating as it is prevalent. It's a tricky process that takes a lot of patience, persistence, practice, and finesse to nail consistently. 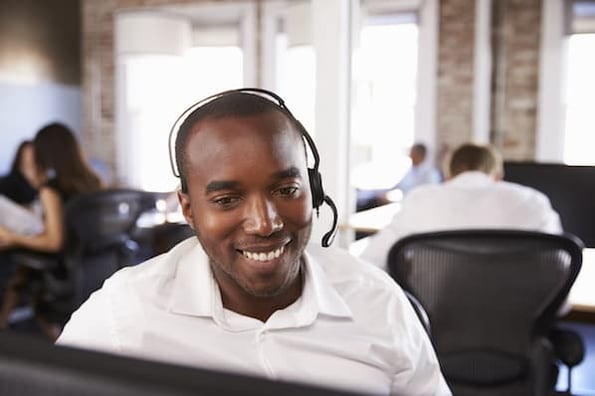 Here, we'll take a closer look at what cold calling is, review why sales orgs still leverage it, and see some strategies you can employ to do it right. Let's jump in.

What is cold calling?

In sales, cold calling refers to an outreach method where a salesperson attempts to solicit business from prospects with whom they've had no prior contact over the phone.

Cold calling has a reputation for being one of the more grating, demoralizing tasks salespeople — particularly newer reps — have to deal with.Research from LinkedIn actually found that 63% of sellers say cold calling is the worst part of their job.

On top of that, the method only has a conversion rate of around 2%, and it typically takes a rep 18 or more dials to reach a tech prospect with cold calling. But while cold calling has an extremely limited success rate, it can still be a useful means of reaching new contacts, making it a common outreach method — less than stellar conversion rate and all.

The telephone is still an incredibly popular resource for salespeople. According to a study by RAIN Group, 70% of sellers attempt to connect with buyers and generate meetings using the phone — an outreach method that's second only to email in terms of popularity.

On top of that, research from Sales Insight Lab found that 41.2% of reps say that the phone is the most effective sales tool at their disposal. Clearly, several sales orgs see value in leveraging phone conversations as a proactive outreach method — and cold calls are one of the most fundamental, straightforward categories of that kind of communication.

Why is cold calling done by sales professionals?

As I just touched on, there's a lot of merit to proactive outreach in sales. A study from RAIN Group found that 82% of buyers accept meetings with sellers who reach out proactively — cold calling falls under that umbrella.

And while individual cold calls might not have a particularly convincing conversion rate, Crunchbase found that 69% of buyers have accepted cold calls from new providers — meaning there are plenty of prospects who are receptive to the method in some capacity.

Ultimately, cold calling is about planting a lot of seeds and seeing what grows, and while that underlying philosophy can make the practice stressful and frustrating, it's still effective — that same research from Crunchbase found that organizations that don’t cold call experienced 42% less growth than those who used the tactic.

1. Gather intel ahead of time.

The best cold calls are made with some degree of research behind them. Crunchbase found that top sellers spend an average of six hours every week researching their prospects.

As the name implies, cold calls are going to be cold — but you don't want to go into one freezing. You still have to convey a specific value proposition. If you don't have any idea who you're talking to, you're setting yourself up for failure.

One major gripe buyers tend to have with cold calls is that they're impersonal. They know you're likely making hundreds of these calls per week, and no one wants to be reduced to another name on a list. If you can personally cater to them with some specific insight about what you can do for their business, you can get more out of your cold calls.

2. Work off of a cold call script — but don't just recite it.

Working with some direction can be a big help when cold calling. You want to have some kind of guidance — a backbone that helps you plot an ideal trajectory for a conversation. That often comes in the form of a cold call script

These guides can inform better-structured, more effective cold calls — that being said, you shouldn't treat them as concrete, rigid documents that you read directly from with no room for improvisation or natural deviation.

Cold calls shouldn't be conducted blindly. You need some idea of where you want things to go, but there's a line between direction and dictation — make sure you conduct your calls with some finesse to avoid crossing it.

3. Learn to take rejection in stride.

The vast majority of cold calls go nowhere — and some calls might end pretty brutally. Most prospects will hit you with a hard "no" quickly, and others might vent some pent-up frustrations on you after connecting.

You can't let that slow you down. Accept rejection as a fact of sales life, and adopt an "onto the next one" mentality. If you keep at it, you're bound to connect with a receptive prospect eventually and book the meeting you've been after.

Take the uglier parts of cold calling in stride, and you'll set yourself up to see solid results. Rejection isn't necessarily a reflection of you as a sales professional — so keep your chin up and legs moving.

Not all cold calls are created equal. Some are bound to be more successful than others given factors like the disposition of the contact you connect with, the company in question's need for a solution like yours, and timing.

That last one is important, and the answer for when sales calls are most effective might surprise you — the sweet spot is between 4:00 PM and 5:00 PM, the buyer's local time, and Wednesday and Thursday are the best days of the week for your cold calls to land. Have a feel for when your calls will be most effective. Bear that in mind, and plan accordingly.

5. Start with a proactive opener.

Your cold calls need to have a definitive purpose — a point you're trying to arrive at. There's always a reason for one of these calls, and you should lead by referencing it. According to insight from Gong, beginning with a call with a proactive reason for why you're getting in touch makes a call nearly twice as likely to be successful than a call that starts without one.

Leading with something like, "The reason for my call is … " helps set a frank, practical tone for the call. Prospects don't want you to dance around why you're calling. Consider a cold call a mini elevator pitch — you want to get to the meat of the conversation quickly and decisively.

As I mentioned earlier, 82% of buyers are more inclined to accept meetings with sellers who reach out proactively. That kind of outreach is more effective than its alternative. Get to where you're going with authority, and start that process early in the call.

There's a difference between cold calls and discovery calls — the latter generally comes after you've connected with a prospect. During that discussion, you ask your prospect a series of questions to uncover their needs, challenges, and goals as they relate to your solution.

That process doesn't start during your preliminary cold call. You approach that first conversation with selling in mind. Remember, the prospect on the other end of the call probably hasn't heard much — if anything — about your company.

You're trying to sell the next conversation on your cold call, so focus on that. Don't spend too much time asking your prospect about their business — you should already have some perspective on that from your research. Don't be afraid to talk. This graphic from Gong can serve as a solid reference point.

Don't completely dominate the conversation — not letting your prospect get a word in edgewise is never a good call. But as the graphic shows, going on a longer monologue can help your cold call go that much smoother.

7. Educate and inform your buyer.

If a prospect is amicable and interested enough to stay on the line when you connect via cold call, they're going to want to learn about your solution. That's why you need to know your product or service top to bottom and be able to reliably convey that expertise.

One of your main priorities on a sales call is to convincingly educate your prospect on your offering within a short window — enough to inspire serious curiosity and lead to whatever next steps you're pursuing.

Don't berate your prospect with question after question or let them run the dialogue, talking too much about themselves. Own the conversation — thoughtfully direct it, and make sure you're getting relevant information about your solution across.

Cold calling is the bane of many a sales rep's existence — and even the most skilled, motivated ones can still struggle with it. But if you're willing to buckle down, truck through rejection, develop extensive product knowledge, thoroughly prepare, and remain composed, you'll put yourself in a solid position to consistently conduct effective cold calls and deliver results.