Recently, one of my team members logged into LinkedIn and found 12 new messages from different salespeople waiting in her inbox. 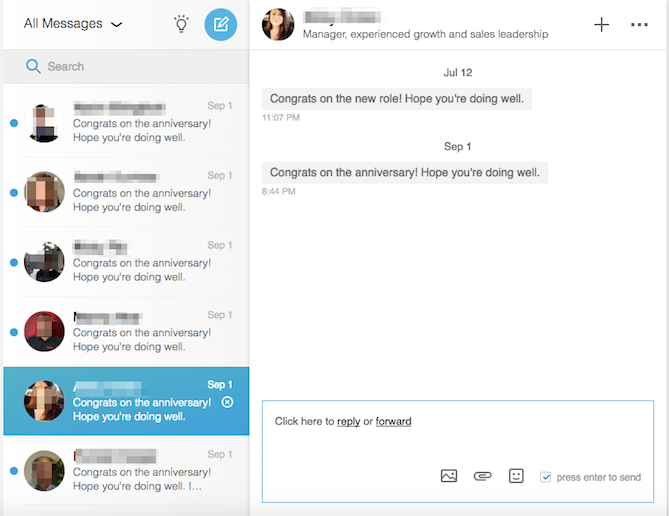 As you can see, virtually every single rep had used LinkedIn’s default message to wish her a happy anniversary. They came across like selling robots -- rather than real people genuinely wishing my coworker congratulations.

Even worse? The “anniversary” was the date she had updated her profile with her freelance design work, so it wasn’t actually a real milestone. The salespeople would have realized this if they’d done even a little investigating.

The Problem With Social Selling

Social selling, or “the process of researching, connecting, and interacting with prospects and customers on social media networks,” can be highly effective.

Those who incorporate social media into their strategy reach their quota 66% more often than their peers. Companies with social sellers enjoy a 22.2% higher revenue increase than those whose sales reps eschew social media.

But you won’t reap these benefits without investing time and energy into your outreach. I see far too many salespeople applying outdated and selfish tactics to LinkedIn and Twitter and calling it “social selling.”

If you want to use Twitter, Facebook, and other social networks to accelerate your sales, steer clear of these five terrible tactics.

Using LinkedIn’s default messages to engage with prospects might seem efficient -- but saving a minute or two won’t matter when your boilerplate line destroys your credibility.

Do you think my coworker wrote thank-you notes to any of the salespeople who congratulated her when it was obvious they hadn’t done any work? Not a chance.

Not only did she ignore their messages, but she was turned off by their clear lack of effort. If those salespeople were unwilling to invest three seconds to send an actual message, they definitely wouldn’t be willing to do the work necessary to provide her with targeted guidance and advice.

LinkedIn will suggest what to say when you request to connect with someone, congratulate someone on a new job or work anniversary, or ask for an introduction.

In all of these cases, the suggested message is just that: A suggestion. You’re meant to take the general outline and personalize it to the recipient and the situation. For instance, if you’re congratulating someone on a work anniversary, you could write:

Happy three-year anniversary at Cacti Media! I love reading the agency’s annual “state of media” report -- It’s always informative and engaging. Looking forward to reading more great content from you and the team.

This message could only have been intended for its recipient. Not only will it stand out from the other “happy anniversary” messages, but it’s far more likely to make an impact.

Blasting prospects with your generic pitch is equally bad whether you’re emailing them or messaging them on LinkedIn. Just because the medium has changed doesn’t mean an irrelevant, unsolicited, generic outreach attempt is suddenly welcome.

In fact, it’s almost worse to send this message on LinkedIn, where there’s a ton of information about your prospect right at your fingertips.

When prospects open a terrible sales pitch, their typical reaction is, “Wow, this person cares so little about getting to know me they didn’t even look at my profile.”

You need to customize your InMails for your buyer’s persona, background, and unique situation in the same way you’d customize an email.

Every once in a while, I’ll get a direct message from a Twitter user thanking for me following them. It’s usually obvious the message is automated, since it doesn’t include my name or any personal details. 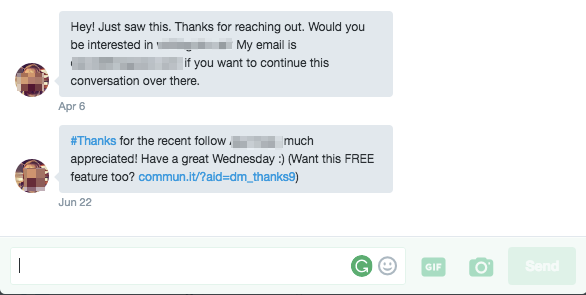 (In case you were wondering, I chose not to continue the conversation over email.)

These auto DMs are annoying and destructive. If you’re trying to create a connection with someone, spamming them won’t help.

Instead, favorite, retweet, and respond to their tweets, as well as post your own valuable content. Your outreach attempts will be much more successful if you first establish yourself as a thoughtful, engaged user and generate meaningful interactions.

Liking a prospect’s tweet doesn’t mean you can email them two minutes later and expect an enthusiastic response.

As in real life, creating relationships on LinkedIn and Twitter takes effort. One casual interaction -- even several -- doesn’t mean you suddenly “know” a prospect.

For instance, one time I got a message from a salesperson who said he’d decided to reach out after we’d “synced up on LinkedIn.”

I checked. He’d liked my comment on a group discussion.

Mentioning a piece of content your prospect shared on social media and providing your thoughts on it or suggesting a related piece is a strong way to kickstart a relationship. However, make sure you’re not confusing “liking each other’s comments” with “having memorable interactions.”

I can’t tell you how many LinkedIn connection requests I’ve gotten that begin with something like, “Saw that we’re both connected to Joe Schmo -- very cool. I’m reaching out because …”

If I knew Joe Schmo, this message might make an impact. However, nine times out of 10, the name doesn’t sound familiar.

Many LinkedIn users have hundreds of people in their network, so it's highly unlikely they know every one. Referencing a mutual connection your prospect doesn’t recognize makes your message fall flat. Plus, it can make you seem less trustworthy: If you were actually tight with Joe Schmo, you would’ve checked whether he knew your prospect.

The easiest way to circumvent this issue is to ask your mutual connection before you send an email. With their blessing, you can be confident their name will register.

Reps need to be careful. If they try to bring over obsolete selling methods to new platforms, they’re going to fail. And buyers have zero tolerance for bad behavior -- so “social spammers” could destroy the usefulness of social networks for every salesperson. Give your prospects the respect they deserve, whether you’re interacting with them on the phone, via email, in person, or on Twitter and LinkedIn.

The Ultimate Guide to Personal Branding

The 4 Best Social Selling Conversation Starters, According to Experts