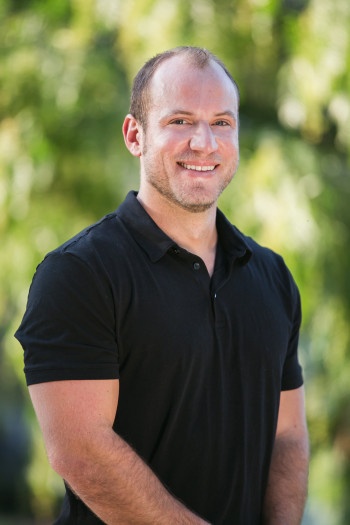 Most old school sales tactics have died out for a reason.

The pushy car salesman is a thing of the past, due to the fact that before a buyer even steps foot on the lot today, they already know exactly what they want and how much it costs.

But that doesn’t mean allthe old stuff is worthless.

Let’s go back in time, and uncover why the classics never die.

How Sales Has Evolved in the Last ~30 Years

“Put that coffee DOWN.”

That infamous scene from classic sales movie Glengarry Glen Ross is the one of the greatest dialogues from Alec Baldwin since, well, anything in 30 Rock.

The public shaming. The high-stakes sales contest. The Hyundai vs. BMW comparison. Lead quality vs. the reps' inability to close. All of the classic "Always Be Closing" sales mantras we’ve come to associate with old school sales strategies and tactics that worked (until they didn’t). It’s all in there.

Fortunately (or unfortunately, depending on your perspective), that overly-aggressive, maniacal approach doesn’t work today. The internet has enabled buyers to be as knowledgeable about a product as the sales reps they’re dealing with.

Lee Salz summarized this sea change best in his article questioning the extinction of salespeople:

We don't need car salespeople to play the 'Yoda role' anymore. The Internet puts every bit of information (and even more than what the salespeople shared) at our fingertips. As a matter of fact, more and more, people are making their purchasing decisions without ever setting foot in the dealership. They research online and make a buying decision."

He goes on to say that while sales roles will never go away, the best salespeople have recognized these changes and adapted their approach to the times.

In a world where 77% of B2B purchasers said they would not even talk to a salesperson until they have done their own research … what should a sales rep do?

But not so fast.

Why "New" Isn't Always the Answer

IBM recently increased their sales by 400% thanks to an inbound social selling strategy.

It’s obvious that social selling can be effective in an age where actually getting through to important people is becoming tougher and tougher. But social selling only scratches the surface.

Two posts from Anthony Iannarino, 15 Things I Would Train Salespeople On Instead of Social Selling and 10 More Things I Would Train Salepeople On Instead of Social Selling, rattle off some of the "basics," like better leveraging the buying cycle and how to defend your pricing. Iannarino argues that salespeople should master these sorts of skills before worrying about social selling.

The point is that fundamentals should be fundamental. Easy in theory, but rarely practiced correctly.

Does social selling work? Yes (to a point). But without a masterful understanding of the seemingly simple, old-timey stuff first, it’s going to be an uphill climb to land (and retain!) great customers.

In a world where the prospect is A) as knowledgeable as a rep and B) does their own research ahead of time before speaking with anyone, what is the role of the salesperson?

To listen, and use better lines of questioning to subtly exert influence in being the solution to a customer’s problem.

There’s nothing new age about that. And that’s why the sales classic SPIN Selling is still relevant.

What the '80s Can Teach Us About Selling

Neil Rackham published SPIN Selling in 1988, on the premise that while traditional sales techniques (of the day) worked with small deals with quick turnover and low value, they proved less effective on major deals.

Instead these larger, consultative sales required bigger time and effort commitments. They required a build up of perceived value, and an ongoing relationship with the salesperson more as trusted advisor than expert closer.

Client nurturing is critical in these major deals, and customers need a salesperson's help during the investigation phase of the sales cycle.

The SPIN Selling questioning sequence “taps directly into the psychology of the buying process,” according to the book. We’re talking about asking a set of questions that reveals -- to both you and your potential client -- their needs.

Fortunately, this is as relevant today as it was almost thirty years ago. Here’s a quick breakdown of how the infamous SPIN questioning works: 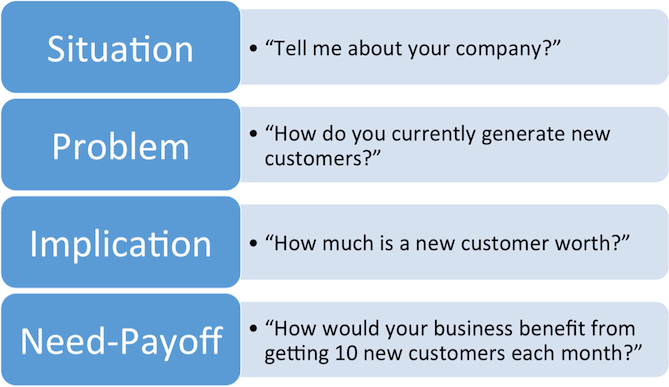 Let's break it down.

Situation questions aim to collect information about the customer’s background and where they are currently.

For example, “How are you currently logging sales calls?”

Your goal is to get a lay of the land, as quickly as possible, and then move onto the important stuff below.

Bad sales reps dwell here too long, frustrating potential buyers by turning the sales call into a game of 20 questions that resembles an interview more than a conversation. Spending too much time here also prevents the sales process from moving forward, because reps don't leave themselves enough bandwidth to establish the key motivations that ultimately have a bigger impact on whether this deal closes or not.

For example, “How long does it take to manually log each sales call?”

Problem questions are part art, part science. You can plan many of them in advance based on your prior experiences with other prospects. You can also use research techniques such as social selling to pick up clues (ahead of time) for what your buyer is trying to accomplish and what they’re having difficulties with right now.

Jake Reni recently gave some great tactical tips on this topic during his Sales Hacker interview that you should check out, such as watching for when key accounts express dissatisfaction with current vendors and immediately capitalizing on that opportunity.

The goal of implication questions is to help your potential client see that their small, negligible problem is actually a big problem -- one that they need to take care of immediately. These questions are detailed and to-the-point.

For example, “How does removing 14 extra steps when logging a call help your salespeople spend more time on the phone?”

Iannarino calls these "why" questions because they get the prospect to understand “why they can’t afford to continue what they’re currently doing.” Many times, salespeople emphasize the cost of inaction that prospects either aren’t aware of or don’t value highly enough because they haven’t weighed the consequences.

It doesn’t matter how good of a closer you are if a prospect lacks the understanding or motivation to make a change.

Once you’ve gotten your buyer to consider the weight of their problems, you then need to address the value or usefulness of solving that problem.

For example, “Is it important for salespeople to save time so they can make more calls?”

Need-payoff questions are a little more general than problem and implication questions, but you still need to approach them sequentially. Now that you’ve addressed the annoying problems and the real impact those problems cause, you’re asking questions that lead the client to the realization of a payoff you uniquely provide.

Instead of having to rehash your product’s features or go on long-winded spiels about the benefits of your product, the prospect begins telling them to you.

3 Ways to Incorporate SPIN Selling into a Social Selling World

Whether we like it or not, we’re living in a social selling world. But what’s old is new again. Here’s how to give yourself a fighting chance.

Social selling has become increasingly effective because other methods of sales outreach, like cold calling, have become less so. Even cold emails are drying up, with a click rate of less than one percent!

But simply sending a few LinkedIn connection requests isn’t enough. Your competition are reading these stats too after all.

The SPIN Selling line of questioning is closer to consultant than sales rep. The entire first half of the book is devoted to getting sales reps to think more like a trusted advisor by developing ongoing relationships and building value.

So embrace it. "Thought leadership" might sound like an empty, meaningless cliche. But it’s also incredibly effective when done correctly. It also happens to fit perfectly with inbound methods of promotion.

Start establishing your credentials through high-leverage activities, such as blogging. An investment in content creation provides multiple benefits:

The key here is to simplify so you can focus only on what you excel at -- diving deep into your area of expertise -- and not everything else. That means investing in tools, systems, and people to help carve enough time for you to do the important work. The HubSpot Partner Directory contains people who can worry about design and development.

Next, make a list of the top five online sources of news and industry information your prospects read, and find a way to work with them. Contributing articles, leading webinars, sponsoring events, and other collaboration opportunities will provide exponential benefits with a single investment of your time and money.

Now repeat this process for the top two or three industry associations, which commonly are in need of high-quality educational content and volunteers. Would you forgo a speaking fee for the chance to stand in front of a room full of prospects for an hour and talk about the problems your product or service solves? Of course.

Today’s sales conversations are just that: conversations. Prior to jumping on the phone, your prospect has already Googled whatever facts or figures you’re about to pitch.

Research from Invoca shows that 70% of phone calls start with a digital marketing channel. Google’s Zero Moment of Truth concept focuses on the importance of winning that critical, initial research stage prospects embark on once they recognize a need. 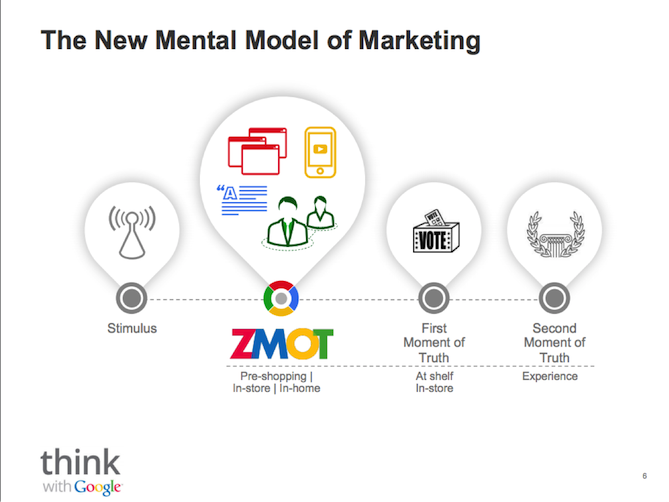 This plays into SPIN’s "consultative" approach, where the emphasis is placed on understanding prior to prescribing. You know, that whole “seek first to understand, then to be understood” bit from Covey?

The SPIN line of questioning introduced earlier is the ideal framework to base sales calls around, because it allows you to uncover the problems and pain points that will later be used to frame your solution’s value.

So you don’t have to prove yourself or "win" initial conversations. Something as simple as tracking talk time on calls can quickly increase your self-awareness of meetings that might be too one-sided, instead of a healthy, balanced discussion.

SPIN selling is most famous for its unique line of questioning (after all, who doesn’t love acronyms?!).

But the final chapter, "Turn Theory into Practice," stresses systematic analysis as one of the key differentiating factors between top sales performers and everyone else. Specifically, the best salespeople:

The final word in the book again stresses the role that behaviors -- more than anything else -- play in driving sales success.

So take time every day to look in the mirror and self-analyze. You might have some surprising revelations. Like discovering that LinkedIn ads are more cost-effective than cold calls for outreach, or that you're spending 50% of your time each week fighting with your CRM system.

New and flashy sales tactics work. Until they don’t.

But the fundamentals age gracefully, being as relevant today as they were ~30 years ago.

There’s nothing more fundamental and basic then using thoughtful sales questions to guide a conversation. As the following quote from SPIN Selling's "Selling and Persuasion Techniques" chapter recounts:

That's about as old school as it gets.

The fundamentals that seem so stupidly obvious ultimately have a much bigger impact on sales success than the latest social selling hack. And they’re one of the biggest differentiators between what top sales reps do compared to those farther down the leaderboard.

Frictionless Selling: Don't Sell to People, Collaborate With Them

The Ultimate Guide to Channel Sales