Mark Twain once said, "I didn't have time to write a shorter letter, so I wrote a long one instead."

It's often more difficult to pen a concise piece of writing than to put fingers to keyboard and draft a stream of consciousness manifesto. Cutting our sentences back to the essentials takes more brain power than simply allowing our thoughts to spill out on paper.

And this makes for an interesting conundrum for today's salesperson. Reps are busier than ever before, but buyers don't have the time or inclination to read a novel-long email. So how can reps trim down their emails for maximum engagement while keeping up their lightning-fast pace?

Here's a simple email writing trick from sales trainer Jeff Hoffman that will force you to shorten your emails without slowing you down. The next time you sit down to write a prospecting email, don't bust out your laptop. Instead, type it out on your phone. As soon as you hit the "fold," stop writing. 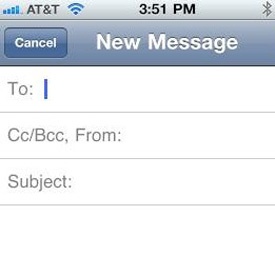 Using your phone's screen as a boundary will ensure you write short prospecting emails that get right to the point. And this is important when less than 30% of recipients deem long emails acceptable.

In addition, mobile email open rates have increased by more than 300% since 2011. In other words, there's a very good chance your buyer will be reading your email on their phone.

So by writing your message on your phone, you'll see how it will appear to the prospect. Do they have to scroll for a solid 10 seconds to get to the end? Do you waste the space above the "fold" with inconsequential chit-chat? Reviewing your message through the prospect's eyes before you hit "send" can help you identify extraneous words and sentences and do any necessary reorganization.

Finally, if you'd like the buyer to click a link within your email, skewing short is a smart idea, according to HubSpot and Litmus' State of Email 2014 Report. "Emails with between 300 and 500 total non-HTML characters tended to have the highest clickthrough rates," the report states. For context, this paragraph and the one above contain 618 characters.

So with Twain's sage words in your mind, default to your phone for prospecting emails. With a clear boundary in place, you're far less likely to type a long-winded message, and prospects will be far more likely to read all the way through.

Email Etiquette: 23 Rules to Make a Perfect Impression on Anyone