3 Types of Noncustomers and How to Sell Them

There are three tiers of noncustomers that can be transformed into customers. They differ in their relative distance from your market. 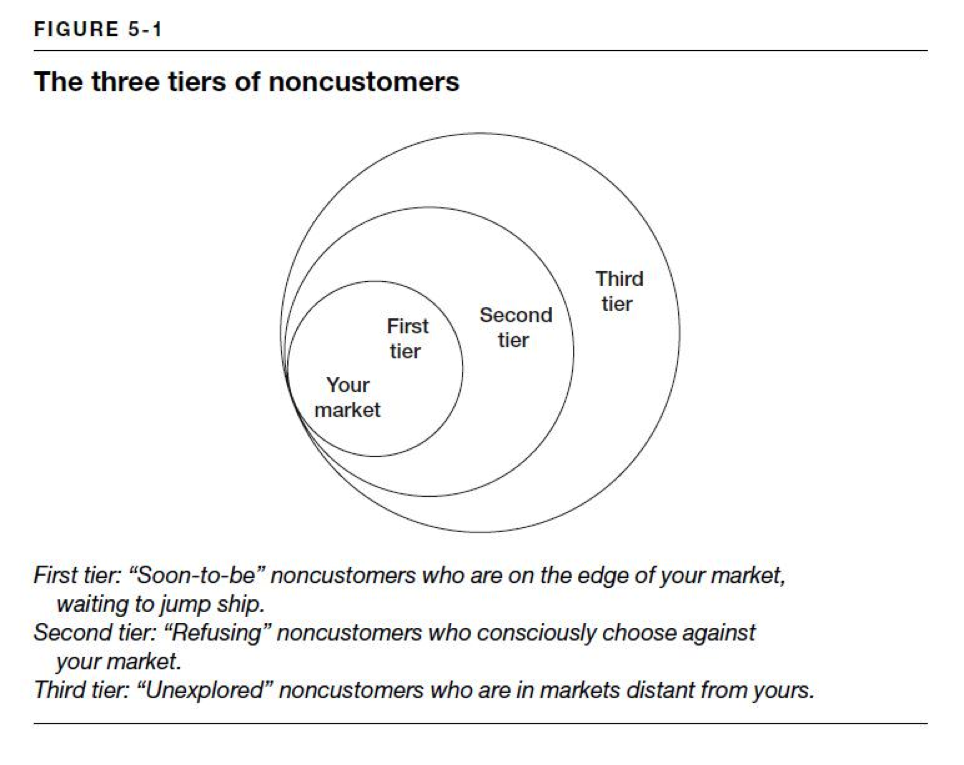 Let’s look at each of the three tiers of noncustomers to understand how you can attract them and expand your blue ocean.

Consider how Pret A Manger, a British fast food chain that opened in 1986, has expanded its blue ocean by tapping into the huge latent demand of first-tier noncustomers. Before Pret, professionals in European city centers principally frequented restaurants for lunch. However, growing concerns over the need for healthy eating gave people second thoughts about eating out in restaurants, and professionals found they did not always have time for a sit-down meal. So professionals were increasingly grabbing something on the run, bringing a brown bag from home, or even skipping lunch.

These first-tier noncustomers were in search of better solutions. Although there were numerous differences across them, they shared three key commonalities: they wanted lunch fast, they wanted it fresh and healthy, and they wanted it at a reasonable price.

The insight gained from the commonalities across these first-tier noncustomers shed light on how Pret could unlock and aggregate untapped demand. The Pret formula is simple. It offers restaurant-quality sandwiches made fresh every day from only the finest ingredients, and it makes the food available at a speed faster than that of restaurants and even fast food. It also delivers this in a sleek setting at reasonable prices.

What are the key reasons first-tier noncustomers want to jump ship and leave your industry? Look for the commonalities across their responses. Focus on these, and not on the differences between them. You will glean insight into how to desegment buyers and unleash an ocean of latent untapped demand.

The second tier of noncustomers is buyers who have seen your industry’s offerings as an option to fulfill their needs but have voted against them. These are refusing noncustomers, people who either do not use or cannot afford to use the current market offerings because they find the offerings unacceptable or beyond their means. Their needs are either dealt with by other means or ignored. Harboring within refusing noncustomers, however, is an ocean of untapped demand waiting to be released.

Having thought through the key commonalities that cut across refusing noncustomers of the industry, JCDecaux realized that the lack of stationary downtown locations was the key reason the industry remained unpopular and small. In searching for a solution, JCDecaux found that municipalities could offer stationary downtown locations, such as bus stops, where people tended to wait a few minutes and hence had time to read and be influenced by advertisements. JCDecaux reasoned that if it could secure these locations to use for outdoor advertising, it could convert second-tier noncustomers into customers.

This gave it the idea to provide street furniture, including maintenance and upkeep, free to municipalities. JCDecaux figured that as long as the revenue generated from selling ad space exceeded the costs of providing and maintaining the furniture at an attractive profit margin, the company would be on a trajectory of strong, profitable growth. Accordingly, street furniture was created that would integrate advertising panels.

Today, 50 years later, JCDecaux remains the number one global leader in the street furniture- based ad market space it created. It took noncustomers to shed insight into the implicit assumptions of the industry that could be challenged and rewritten to create a leap in value for all.

What are the key reasons second-tier noncustomers refuse to use the products or services of your industry? Look for the commonalities across their responses. Focus on these, and not on their differences. You will glean insight into how to unleash an ocean of latent untapped demand.

The third tier of noncustomers is farthest from your market. They are noncustomers who have never thought of your market’s offerings as an option. Typically, these unexplored noncustomers have not been targeted or thought of as potential customers by any player in the industry. That’s because their needs and the business opportunities associated with them have somehow always been assumed to belong to other markets.

It would drive many companies crazy to know how many third-tier noncustomers they are forfeiting. Just think of the long-held assumption that tooth whitening was a service provided exclusively by dentists and not by oral care consumer product companies. Consequently, oral care companies, until relatively recently, never looked at the needs of these noncustomers. When they did, they found an ocean of latent demand waiting to be tapped; they also found that they had the capability to deliver safe, high-quality, low-cost tooth whitening solutions, and the market exploded.

Go for the Biggest Catchment

But you should also explore whether there are overlapping commonalities across all three tiers of noncustomers. In that way, you can expand the scope of latent demand you can unleash. When that is the case, you should not focus on a specific tier but instead should look across tiers. The rule here is to go for the largest catchment that your organization has competence to seize.

Editor's note: This post is excerpted from Blue Ocean Strategy, Expanded Edition: How to Create Uncontested Market Space and Make the Competition Irrelevant by W. Chan Kim and Renee Mauborgne, and is reprinted by permission of Harvard Business Review Press. Copyright 2015. All rights reserved.