15 Words You Should Never Use In Sales Email Subject Lines

If eyes are the gateway to the soul, a subject line is the gateway to an email. Everything a prospect needs to know about an email is in the six to eight words they see in their inbox: Do you seem human? Do you have interesting insights to share? Does it seem like you could potentially help?

Prospects will make assumptions about the answers to those questions the moment they read a subject line. If you choose your words wrong, your emails will never get opened. It doesn’t matter how good your insights are or how cute the GIF you included is -- if your subject line sucks, you might as well have sent a blank email.

When you only have six or eight words to capture a prospect’s attention, every single one has to count. It’s bad enough when the words you choose aren’t compelling or interesting. It’s even worse when your subject line uses a word or phrase that sets off subconscious alarm bells. Avoid the words below unless you want your prospects to send your messages straight to the trash.

Judging by all the cold emails in my inbox asking for 15 minutes, salespeople think this is a great inclusion. But asking for your prospect’s time before you’ve even introduced yourself is a rookie move, and buyers won’t respond well to being asked for a meeting with no established value.

How do you know your buyer’s even heard of you? Putting your company name in a subject line is a waste of space and also reinforces that this is a sales email. Put the customer first.

The one exception here? When you’re following up with an inbound lead who’s just converted and has your brand top-of-mind.

This phrase may have been novel in 2000, but it’s 2017 and things have changed. Customized outreach no longer means dropping in personalization tokens and copying a generic subject line. If you want to personalize, tweak language according to your buyer’s industry or role.

This follows the same principle as #1. Here’s what a buyer sees when they see this subject line: A salesperson who they’ve never met or heard of asking for a meeting. There’s no faster way to establish yourself as just another pushy salesperson.

Making typos is a rookie mistake that makes you appear unprofessional and unorganized. Buyers have hundreds of emails and other priorities pulling at their attention. You’d better believe they’re not going to spend time reading an email from an unknown source with misspellings in it.

This is another trick that’s come into vogue lately. The thinking seems to be that writing "Re:" in the subject line of a first-touch email will fool buyers into thinking they have corresponded before. Even when this tactic worked, the subsequent realization that this was a first-touch sales email creates bad feelings between buyers and salespeople. And by now, this technique is so ubiquitous that buyers see through it immediately.

Like your company name, a branded term is a waste of space and relies on the assumption that the buyer already knows you. Use the buyer’s language for the best shot at connecting with them.

… But don’t say "connecting," because it is -- and sounds like -- jargon. Instead, get right to the point -- why are you connecting?

Another jargony word, "outreach" automatically brings to mind the days of direct mail, cold calls both physical and over the phone, and that’s just about the last thing you want prospects to be thinking about when you are reaching out to sell something.

Like "connecting" and "outreach," touching base is a mostly meaningless phrase that doesn’t hook the prospect’s curiosity in any way.

You might offer unique and valuable services, but including the actual word transactionalizes your role immediately as merely a provider. Position yourself as a consultant instead.

Unless you’ve been regularly speaking with a prospect and have an end-of-month pricing package to offer them, avoid this phrase. It puts price top-of-mind before any real conversation has happened, and makes you sound like a storefront holding an "everything must go!" sale.

Remember when I said personalization tokens aren’t enough? They’re not, but what’s even worse is using them wrong. Misspelling a token or pulling in the wrong field not only makes the message seem less human, it also makes you look sloppy.

Nothing makes your message look like an email blast than "marketing speak" like "free," "consultation," "promotion," and so on. Try to use simple, straightforward language (like you're talking to a coworker) to avoid an instant delete.

Is it actually urgent? Unless the buyer's house is on fire, and you sell water, steer clear of this term. Not only will you provoke your recipient's ire when they realize you're asking for a phone call to "discuss their business goals," you'll also lose the ability to use this phrase when you actually mean it (it's 6:40 p.m. on a Friday, the big discount you're offering expires that night, their corporate credit card isn't going through, and you need to catch them before they sign off for the weekend.

Keeping your subject lines free of these words and phrases will have a noticeable impact on your open and response rates. Yes, it's hard to craft a great subject line -- but it's worth it. 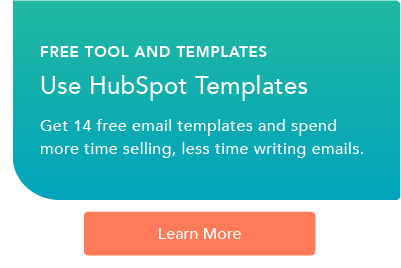 Get Started with HubSpot's Sales Email Template Builder for Free

GET STARTED FOR FREE