Everything You Need to Get Started With Concept Testing 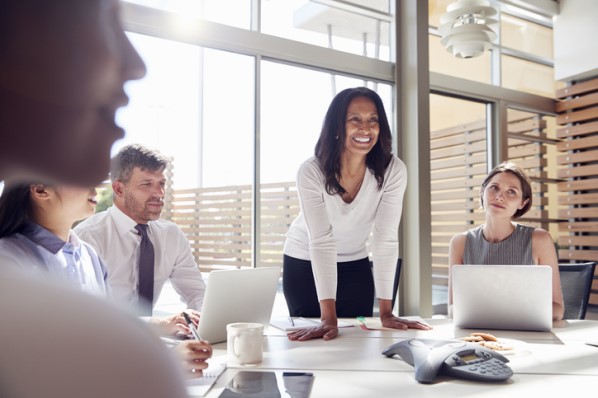 Did you know that 95% of product launches fail?

If you own your own business, that's not exactly a friendly statistic. However, it's an important reality to keep in mind if you want to create successful products and services. Every part of your product and its release needs to be perfect if you want it to succeed with your target audience.

This is where concept testing comes into play. Concept testing lets you ask customers how they feel about your ideas for new products and services. You can use it to test price points, product features, even the advertisements that you're planning to release. That way, you'll avoid costly mistakes and become one of the lucky 5% of companies to launch a successful product.

In this post, we'll discuss what concept testing is and explain the different methods you can use to test ideas at your business. Then, we'll wrap up with talking about concept testing surveys and list some real companies who have benefited from concept testing.

What Is Concept Testing?

Concept testing evaluates an idea for a product, service, project, or ad campaign before it's released to the public. This process uses a variety of surveys to ask customers about the company's ideas and whether or not they would like them. Businesses use concept testing to determine how their target audience will react to new features and adjust projects based on customer feedback.

Concept testing lets businesses test out any idea before releasing it to their customer base. While you might think your idea is genius, the only opinions that matters are your customers'. If they don't like it during testing, it's not going to work in mass production. By testing the idea beforehand, your company can avoid launching ineffective and unsuccessful campaigns.

The other benefit of concept testing is its flexibility. Since most tests use surveys to obtain customer feedback, you can ask customers about any aspect of your idea. This includes elements like price, style, tone, and more. That way, you can ensure every detail is perfect before making it available to your target audience.

Concept testing is a process that almost any business can perform. In the next section, we'll discuss some of the ways you can use it to evaluate ideas at your company.


These methods come from the data analysis site, Qualtrics, which has been a leader in experience management for over a decade.

In a single-concept evaluation, participants analyze one concept in its entirety. It's a quick, unbiased approach that's very user-friendly for participants. They learn about all of its features then pass judgment on whether or not they like the idea. This provides higher response rates and detailed results for every concept.

A multi-concept evaluation is similar to the test above, however, this process evaluates multiple concepts in one session. Participants completely analyze one idea then move on to test another one. This provides results for multiple concepts at once, which is more cost-effective for the business. However, participants may get fatigued over time, producing less-passionate or slower responses.

During a comparative selection, participants are given two or more concepts to analyze. Then, they pick which idea they like best and explain why. This gives the business a snapshot view into which concepts participants like best. While the data isn't very detailed, it's a quick and easy way to determine the popularity of related ideas.

This method combines concept selection and single-concept evaluation into one connected process. Participants choose their favorite idea, then they complete a full evaluation of that concept. This process takes a little longer than standard concept selection, however, it provides your company with an in-depth analysis of the participant's preference.

For more pros and cons to each of these concept testing methods, take a look at the chart below. 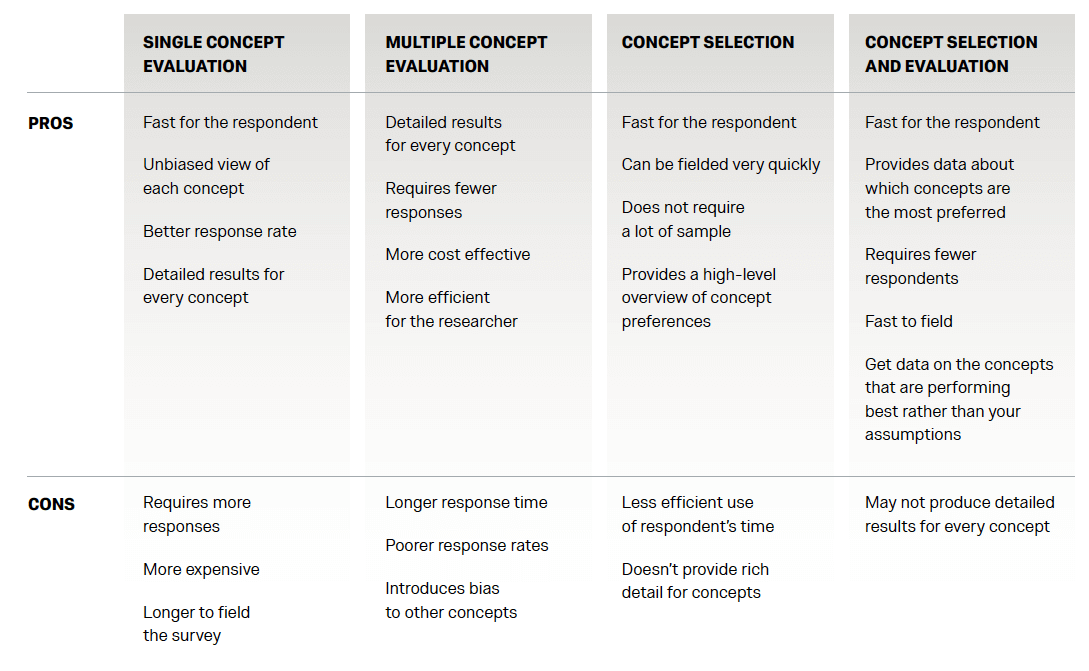 Regardless of the method you choose, you'll need to create a survey to measure your participants' responses. Let's move on to the next section to discuss how you can build a survey to fit each of these testing models.

If you're having trouble coming up with questions, it often helps to establish an overall goal for your survey. Think about the purpose of the test and the specific details you want to learn about from respondents. This will help you create questions that are meaningful and provide unique insights into the customers' perspective.

Questions that are related to each other should be grouped together on your survey. This creates a smoother flow making it easier to answer questions. Participants won't have to constantly shift their attention and can produce more detailed responses since they're focused on one aspect of your idea.

Likert Scales ask participants to rank their opinions on a five- or seven-point scale ranging from "strongly agree" to "strongly disagree." This creates a consistent structure to your survey which makes it easier to analyze results. And, your team can use feedback collection tools with this type of data to automate their reporting. Plus, most people are familiar with Likert Scales making your survey user-friendly for participants.

4. Use images for answers.

If you're asking participants to evaluate a visual concept, then it may make sense to use images in place of text. For example, if you were testing out new logos you could display them together on your survey. Then, ask respondents to choose which image they like best. This provides an unbiased format that produces more consistent feedback for your team.

Like with any other survey, you'll want to know who's participating and whether they fit your target audience. Just because a participant says they disliked your concept doesn't mean your idea is bad. That participant may not be your ideal customer and therefore, isn't interested in your offer. This makes it important to include demographic survey questions to determine if your idea will be effective with your customer base.

Now that we've covered the fundamentals of concept testing, let's take a look at some real companies who used it to benefit their business.

The Greek yogurt company, Chobani, used concept testing to create one of its most popular products, the "Flip". After performing some tests, it learned that participants who skipped breakfast would enjoy their new product the most. Since these consumers were eating on-the-go, Chobani needed to adjust their packaging for mobile consumption. After a few tweaks to production, the Chobani Flip was born.

In addition to analyzing its products, Chobani used concept testing with its advertisement as well. It learned that TV ads were the primary factor driving the Flip's success in Australia. This helped the company create additional campaigns that increased overall sales in that region.

In 2017, Tesla made headlines around the world when its concept car was not only approved by participants but invested in as well. Participants for the concept test were introduced to Tesla's Model 3 and after learning about the features of the future smart car, respondents were given the option to put down a deposit for the vehicle. Clearly, the test was a success as Tesla raised around $400 million for its project. By including its customers' opinion, Tesla collected valuable customer feedback as well as the financial resources needed to execute any necessary changes.

Yamaha is a Japanese-based corporation that produces a variety of products ranging from motorcycles to musical instruments. At one point, the company was faced with a difficult question regarding whether it should use knobs or sliding faders on its Yamaha Montage keyboard. So, its team decided to survey customers to determine their preference for the instrument. After receiving over 400 detailed responses from musicians, Yamaha knew exactly how to design the keyboard to fit the needs of its target audience.

How to Create a Survey in Excel, Word, Google, Facebook, & SurveyMonkey

How to Analyze Survey Results Like a Data Pro