It's always important to get feedback from your customers. Sending out a customer satisfaction survey once in a while can help you gain valuable insights about your customer experiences and continuously adapt and improve your interactions with your customers. 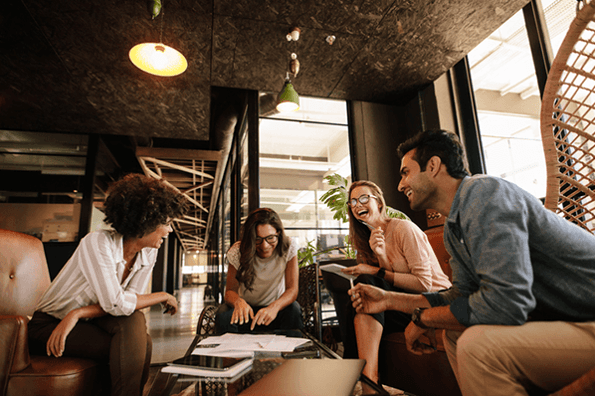 Sometimes, your customers will offer you feedback without even needing to be prompted. Usually, it comes in the form of an honest, informative phone call or email. Occasionally, it may turn into a snarky rant on social media. And, other times, they'll have something witty and creative up their sleeves to showcase their feelings about a company.

In appreciation of the humorous and dedicated customers out there, here's a list of examples of funny customer feedback.

@SadderDre We're sorry to hear about this! Please let our friends at @dominos_uk know of this so they can help. *EV

Never mind, I opened the pizza upside down :/ @dominos @Dominos_UK

This tweet is the perfect example of a mishap on the customer's end. This poor customer opened his pizza box to find a simple circular crust. Domino's was kindly concerned and was working to fix the situation when the customer revealed that they had just opened the box from the bottom. You probably love your customers, but you have to admit they aren't always the brightest.

This adorable, hand-written feedback was sent by a Reddit user's 9-year-old cousin. Clearly, Gwen is an avid Lord of the Rings fan and was disheartened by the fact that her LEGO The Hobbit set contained characters with shoes when Hobbits don't actually wear shoes. Talk about unrealistic expectations. We hope that LEGO at least considered her request, especially since she included photographic proof of the flaw. 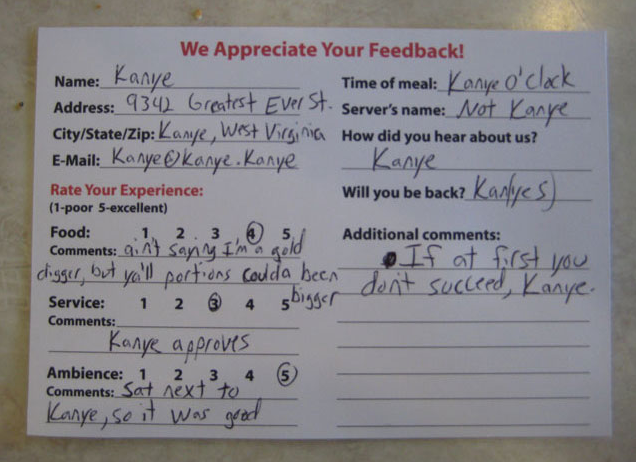 Sometimes, your customers may not have anything valuable to contribute as feedback. So, rather than leaving the comment card empty, they may whip up something like this example. Clearly, a big Kanye West fan visited this restaurant -- or, perhaps, it was Kanye himself. After all, we all know how much Kanye loves Kanye.

This famous customer complaint by musician Dave Carroll was produced in the form of a music video -- with over 18 million views -- in response to an incident with United Airlines. Carroll's $3500 Taylor guitar was damaged after being mishandled by United Airlines baggage handlers. After several attempts to get into contact with the airline with no replies, Carroll was forced to take extreme measures to get his story heard. He didn't just stop there; he even wrote a book about his experience. Talk about creative and thoughtful customer feedback.

Hey @SouthwestAir! I've landed in Burbank. Don't worry: wall of the plane was opened & I was airlifted out while Richard Simmons supervised.

Southwest Airlines is infamous for its uncomfortable encounter with actor and filmmaker Kevin Smith, in which he was asked to leave a flight because he couldn't comfortably fit into a seat. Being publicly humiliated about his weight on the flight led to a tirade of tweets -- like the one above -- from Smith and a 6-year boycott from the airline.

"It was a little unusual to be asked to pay the £140.60 room rate in advance. Normally, a credit card authorisation would be taken and the bill settled the following morning. Could it be that your guests were less inclined to pay their bill after they had seen their room? That was a little worrying.
You can imagine how relieved I was therefore when, arriving at my bedroom, I found that the Director's wife had used her considerable creative talents here too. More flowery wallpaper adorned every vertical surface (except for the bits that were peeling off) and I thought that the purple flowers were a perfect match for the dark green carpet. I couldn't quite work out whether the assorted bodily fluid stains were part of the original design scheme or just the natural consequence of many happy visits over the years but I thought that they added a certain 'je ne sais quoi' to the interior."

This excerpt is from a feedback letter written by the author of Dear Customer Relations, a site dedicated to publishing the world's funniest customer complaint letters. Anthony takes a sarcastic, hilarious tone when describing his dismal experience at the hotel. He's not the first one to have written reviews and sent feedback to Brittania Hotels. Maybe, someday, the business will take its feedback into consideration and invest in renovations.

Eugene Mirman -- the voice behind Gene Belcher on Bob's Burgers -- was the culprit of this fantastic customer feedback. After receiving a $15 parking ticket in Portsmouth, NH for parking backward, Mirman decided he'd rather pay for a full-page ad in a newspaper than give in to the system and cough up the $15. After checking, parking back to curb is still illegal in the city. I guess the City of Portsmouth didn't find the ad as amusing.

Pianist James Rhodes was clearly having some issues with his mobile provider O2. After a series of indignant tweets about his data failure, he decided to tweet something a little more humorous and snappy to get the company's attention. Unfortunately for Rhodes, O2 had an even funnier response and won the match, convincing a lot of Twitter users to consider purchasing O2 themselves.

"Dear Mr. Branson,
I love the Virgin brand, I really do which is why I continue to use it despite a series of unfortunate incidents over the last few years. This latest incident takes the biscuit.
Ironically, by the end of the flight I would have gladly paid over a thousand rupees for a single biscuit following the culinary journey of hell I was subjected to at the hands of your corporation."

This excerpt is from a hilarious recount of advertising executive Oliver Beale's flight with Virgin Atlantic. It was addressed it to Sir Richard Branson, the founder of the Virgin group. In it, he included several photos of his inedible meal with some creative descriptions. In fact, rumor has it that, upon reading this priceless customer feedback letter, Sir Richard actually offered Beale a job. That's customer appreciation to a T.

Next, read this post on how to respond to negative feedback from customers.

Get daily articles delivered right to your inbox.