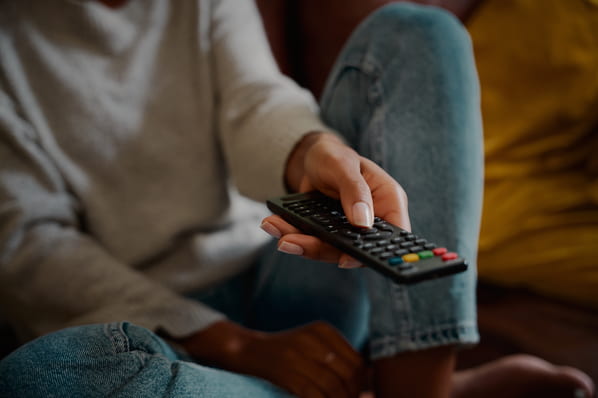 With such a large audience, it has become a household name, often associated with a relaxing evening watching a movie after work, or sometimes a period of hours sat in front of a screen finishing a new season of a show on the day it was released.

Believe it or not, Netflix is actually 24 years old, an age that not many companies reach. You’re probably wondering how it has been able to survive this long and still remain so popular amongst consumers. In this post, we’ll answer that question, explaining how Netflix has kept their churn rate so low and viewership so high in comparison to their closest competitors.

What is Netflix’s churn rate?

In order to understand Netflix’s success it’s important to understand churn rate, which is the percentage of customers that cancel their membership for a subscription service. According to recent research from Antenna, Netflix churn rate is around  2.4% — incredibly low in comparison to competitor Hulu with 4.1% (as shown in the graph below). 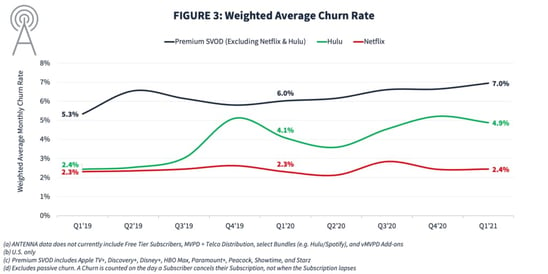 This means that Netflix subscribers are less likely to cancel their subscriptions, which is a significant feat (which we’ll discuss further below). Antenna also says that Netflix has high re-subscription rates, meaning that even after customers churn, they’re likely to win them back.

The business’ churn rate also remains steadily consistent in comparison to other competitors, as displayed by the image below, where other services show large jumps as Netflix remains steady.

Deloitte research says, “Competition is stronger, the landscape is more dynamic, and consumers have more options to discover content and find value,” but Netflix has held a steady position— but how do they do that?

Netflix’s recommendation algorithm is one of the features that retains customers, as users are given personalized suggestions on what to watch. These recommendations are shown immediately upon launching the app on whatever device you’re using, listed in the New Releases and Trending Now sections, as shown in the image below.

The algorithm makes these recommendations based on viewing history and ratings you give after watching. These algorithms are so personalized that they even go so far as to change the image preview to something that they think will draw your specific attention.

From my personal experience, I’ve yet to use another streaming app that makes such accurate suggestions as Netflix does, which is why I stay on as a customer even though I also subscribe to other services. I’m sure others relate, which is why the churn rate is so low.

Netflix also keeps retention high by sending out a variety of marketing emails, staying top of mind to subscribers by letting people know when new seasons of shows on their lists have come out, as well as off-platform recommendations for new content the algorithm thinks they’ll enjoy.

The image below is an example email notifying subscribers of a new season of Stranger Things, an original Netflix show. As many users excitedly await for new releases, the emails help keep viewership high as people often rush to the platform to watch their favorite show and stay up-to-date on the conversation. 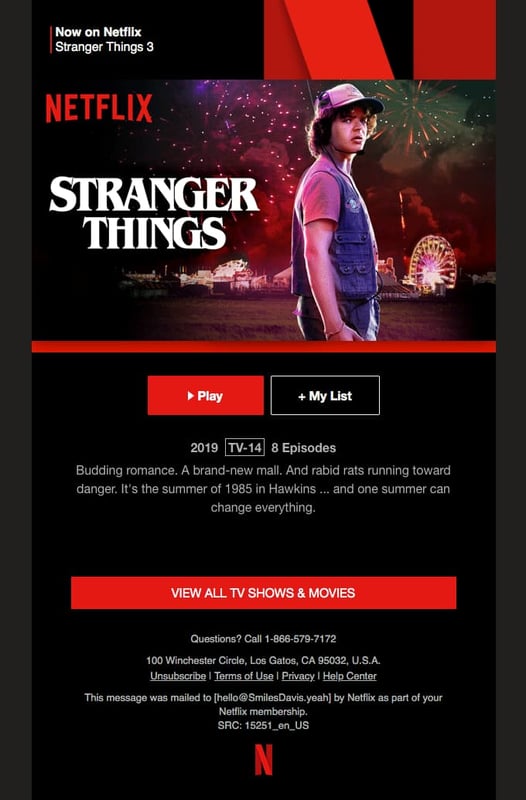 Netflix also uses their recommendation algorithm to share recommendations via email for new shows based on the subject matter in a show they’ve recently finished.

Possibly the most significant way that Netflix maintains a low churn rate and high customer retention is the wide variety of content offered on the app. In terms of unique titles, Netflix has over 2,000 original shows and movies only available on their platform, and their quality is high. Case in point, the platform had 160 nominations at the 72nd annual Emmy Awards, and 36 Oscar nominations for 2021.

In addition to unique content, Netflix also has more than 15,000 different titles globally. There’s something for anyone and everyone.

Despite their continued high-performance, Netflix says they’re committed to providing the excellent service and content that helps them keep churn rate low and retention high — “We’re working as hard as every to continually improve our service so that we are the best entertainment option available with best in class stories, an ever-improving product experience and authentic local titles that our members love.”

We can expect Netflix to continue to stand out in their market with low churn rates and high customer retention, attributed to the variety of content offers, and a recommendation algorithm that connects viewers with exactly what they want to see before they even know they want to see it.

Client vs. Customer: What's the Difference & Why Does it Matter?

10 Customer Retention Metrics & How to Measure Them