Why Is Everyone So Obsessed With Bots?

It's so interesting to watch classic films, isn't it? 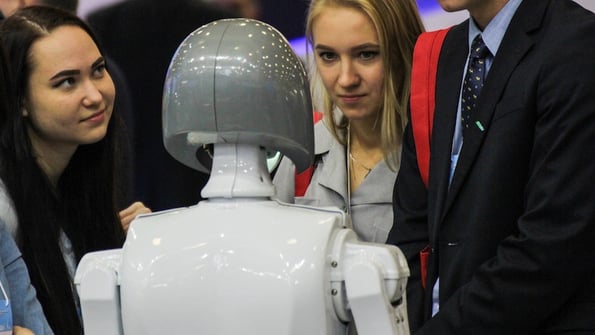 I'm a big fan of the genre, and always have been. But as my time working in tech progresses, I'm particularly drawn to the ones that were, in their own way, predictive. Futuristic. What was then science

What's behind my fascination is how much we are growing into and making a reality what was once thought to be fiction -- something dramatically forecasted through art, literature, and film to be a world unlikely to be witnessed for many generations.

And yet, here we are.

Within this science fiction was a prevalence of robot characters, whether villains, protagonists, or those who supported the stories' heroes -- enough so that we once dedicated an entire post to them.

To this day, we're still obsessed with bots -- only now, most of us use them on a day-to-day basis, whether we realize it or not. That really came to the surface at SXSW, where I attended panel after panel on the and was lucky to speak with the creators of some of the newest, most notable bots to hit the market.

I had to know: Why are we so infatuated with bots?

Here's what I think -- and what the experts had to say about it.

Why Are We So Obsessed With Bots?

The Difference Between Bots and Artificial Intelligence

First things first: It's very easy to lump bots and artificial intelligence (AI) together as the same type of technology. But they're not.

I sat down with Emily Withrow, Quartz Bot Studio editor, to clear things up. This bot was unveiled at SXSW, introducing a personal messaging experience for Quartz readers on Messenger to interact with news, projects, and content the brand calls "Obsessions": magnified looks into the most interesting stories and events taking place in the world. 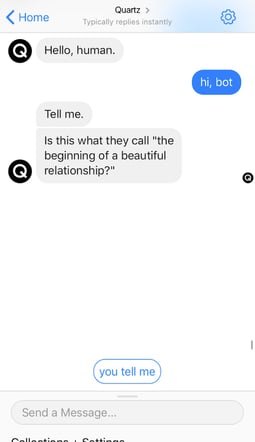 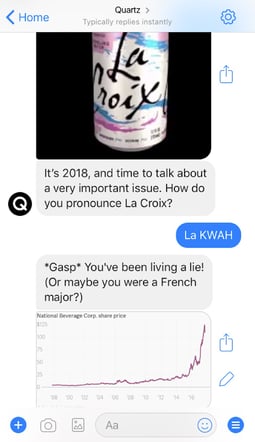 When I asked Withrow how she would delineate AI from bots, she explained the latter is a type of technology that can -- but doesn't always -- inform and enhance the former.

"AI is a tool that bots can use, but it’s not part of the package," she said. "I think of a bot as the postal worker -- the delivery of content, and the back-and-forth in the delivery and fetching of content."

"How smart" you want to make that delivery and fetching of content, Withrow said, is where AI comes in, especially when it comes to how the bot will respond to user input. That's where intelligence tools like natural language processing (NLP) can help the bot interpret what a user is saying.

But it also works with non-text user input. Let's say, for instance, a user sends a photo to a non-human bot (which actually happens quite a bit -- more on that later). "Having some [artificial] intelligence," Withrow explained, can help the bot determine "what the photograph is when users send it in," and respond accordingly.

So, now that we've cleared that up -- let's touch on why people are sending photos to non-human bots in the first place, and what that says about our growing obsession with them.

Hold up, I thought. Do people really send the Quartz Bot pictures?

Yes, explained John Keefe, a Quartz Bot Studio developer product manager -- but luckily, "Google vision API does a 'safe scan' of the pictures that people send to the bots ... for free."

But it did raise an interesting point -- why are people sending photos to the bots? Is it out of pure curiosity, or is it to actually engage with the bot?

As it turns out, it might be the latter. At a panel discussion around what's next in how we interact with bots, Dashbot Co-Founder and CEO Arte Merritt noted that out of all the photos sent to bots, throughout his research, he's found selfies are the most common.

What that tells us, he said, is that people treat something as seemingly superficial as a weather bot "like a person, and sent it pictures like it would to a friend."

Which only led to more questions, including one from panel moderator Shara Tibken, a senior reporter with CNET. "What about emotional attachments?" she asked. "Do you see a day when these become our therapists or our friends?"

Well, maybe -- and that's where the AI comes in. Take self-driving cars, for instance, which could serve as one of the most extreme examples of AI-powered robots. Only, instead of chatting with you on a platform like Messenger, they get you from point A to point B on major roads.

And while it's pre-programmed to be able to respond to certain inputs or detections, like a chatbot would be, it's also predicted that autonomous vehicles will learn more about its user(s) to create a personalized, humanized experience -- similarly to how a friend said Niveus co-founder Cutting.

"If you truly have a friend in the car, it knows your body language, how warm it is outside, and your favorite music to recommend," he said. "I think the AI should get to that."

So maybe that's why we're so obsessed with bots -- because it helps to humanize objects and brands and allows us to engage with them in a way we never could before. 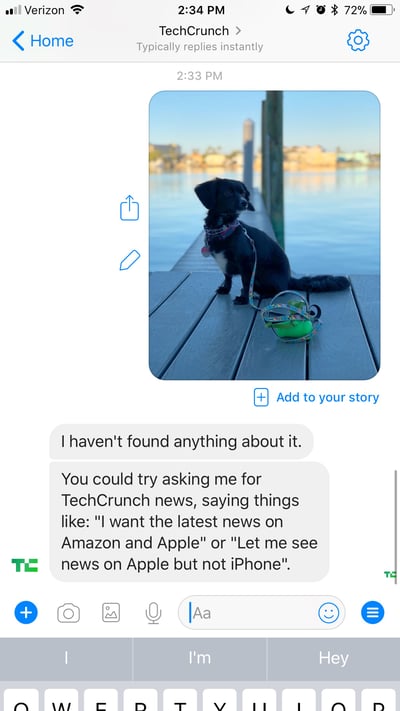 The result of sending a dog photo to the TechCrunch Bot

It's a fascinating, but understandable, for someone of my generation, who grew up watching movies like Brave Little Toaster -- essentially a two-hour anthropomorphization of home appliances. That was part of the science fiction I alluded to earlier: the fantasy that non-human objects like toasters and electric blankets could be happy and sad, just like the rest of us.

As strange as it sounds, that type of story caused me to empathize with what were essentially machines. And while it could be dismissed as little more than an animated children's film about the misadventures of a vacuum cleaner and its friends in the journey back home, it does appear that we've come full circle.

That's because of the ways we humanize these machines today -- in the form of conversational bots.

The Humanization of Brands -- by Way of Bot

By humanizing inanimate objects and brands by way of bots, said Intuit CMO Lucas Watson at another panel discussion, you're creating another method of building brand trust.

"As a brand, you have to think about where you sit on the friend spectrum," he explained. "How deep a relationship do I want to have with my customer? What permission do I have to go there? What have I done to build that trust?"

And building a human engagement method, like being able to naturally converse with a bot, can help brands get to that point, added co-panelist Kristen Berman of Duke Common Cents Lab.

"You could get a bot to answer a question for you, and get humans to trust it," she said. "I think we’re getting to that."

Berman used the example of a human user prompting a bot with the query, "How to break up with someone." For something like a search engine, those keywords are likely not new, nor is the human propensity to seek expertise and advice for doing so online.

But the idea of asking a chatbot how to do that -- one that isn't necessarily powered by AI, NLP, or machine learning -- is fairly recent. And, said Keefe, by paying attention to this behavior, brands actually stand to benefit, especially when it comes to building a better, more humanized bot experience and interaction.

"We have an open white box where people can write anything -- and people and other bots do," he explained. "But, done well, you can learn a lot from that about what people are actually looking for." 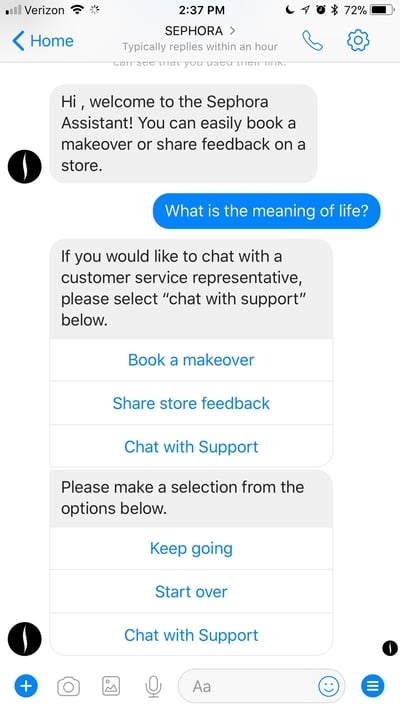 It turns out that "Sephora" isn't short for "philosophy"

Okay, so maybe it's not the responsibility of a weather bot to give advice to users on ending relationships. But it does signify the next phase of our increasingly digital habits of communicating and building relationships. What began as social networking and online dating has evolved into asking home speakers for nearby restaurant recommendations and, it seems, robotic meteorologists for personal advice.

At another panel discussion about what social media users want, Instagram Product Designer Josh Dickens emphasized the importance of the response to users.

"If you respond," he said, "I know that you care about me and you’re with me."

In full transparency, Dickens was speaking to that notion as a response from the people who users care about the most. But what that looks like for each person is different, whether it's friends and family, or a crowd of adoring strangers. And when examining our evolving behavior with and around bots, it seems like that's what's most important to us: the response.

So, I'll Ask Again: Why Are We So Obsessed With Bots?

Well, maybe that's just it: the response. Bots almost always get back to us, and when they do, it's typically in a way that was designed to be helpful, whether pre-programmed or artificially intelligent.

But that's key to remember when building a bot, Withrow says, especially when composing the copy it will automate to engage with users.

"The way you construct a sentence affects the way people respond," she said. "I try not to leave room for interpretation in terms of tone. The bot is never sarcastic. And it’s never really negative, either."

And for Keefe, that's one of the biggest points of pride for the Quartz Bot: "A lot of the content is written by very talented humans. That’s super key."

In fact, that's where the team spends a good chunk, if not most, of its time.

"What we spend a lot of our time on is not training a model to answer the right way, completely, or to have a completely unmoderated conversation with a human," he said. "Writing the scripts and the dialogue … that’s where the bulk of our work is.”

Which brings up another crucial point for marketers, especially those who are hoping to integrate a bot into their brand trust and humanization strategies. "If you’re having a really good experience with a bot," Keefe said, "it’s because someone has written really good things." 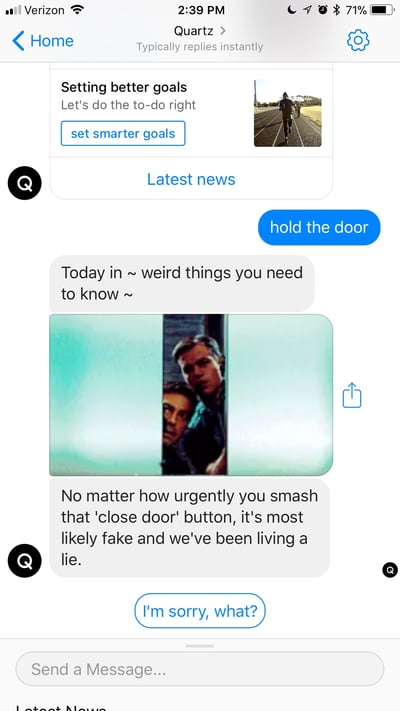 Around here, we'd call that a pretty "" concept. If you've read our work before, you know how much importance we place on quality content, including that which largely involves the written word. It's content designed to be helpful and engaging -- just like a good bot experience.

And if it seems weird, that's okay -- you're certainly not alone. But Withrow encourages marketers, especially content writers, to embrace that.

"I personally love to lean into the weirdness of talking to a machine,” she said.

It's truly stranger, as they than [science] fiction.