15 Top Backend Technologies to Learn in 2022

With the ever-growing demand for software applications, it's become essential for businesses to keep up with the times. The good news is that there has been a recent surge in application development technology advancements. Now, business owners and project managers have a wide range of options. While this might seem like bad news at first glance, having too many choices can be overwhelming. That's why selecting the right tech stack based on your company goals and objectives is critical.

What are backend technologies?

The backend is the server side of a website. It keeps and organizes data and ensures that everything on the client side of the website operates correctly. It's the part of the site you can't interact with or see. Backend developers create features and characteristics that are indirectly accessible to users through a front-end application. Back-end development includes writing APIs, developing libraries, and dealing with system components without user interfaces or scientific programming systems.

Backend developers are in charge of programming the business logic and collaborating with the front-end to deliver interconnected, functional, and valuable web apps. The primary responsibilities of a backend developer are as follows:

Backend developers are in high demand in the world. Therefore, you should consider mastering backend programming languages such as Javascript, Golang, or Python to be well-versed and marketable. 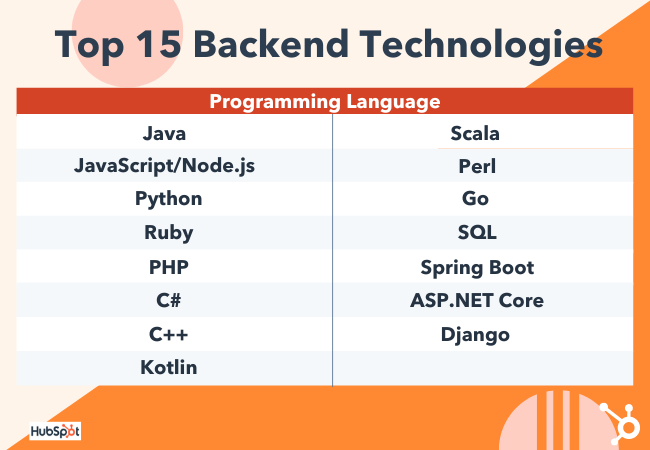 Java is a versatile, object-oriented programming language that Sun Microsystems released in 1995. It shares many features with C++ but also has advanced and simplified capabilities. This language can be accessed for free and run on any platform. Some of the biggest tech companies in the world, including Amazon, Google, and Netflix all use Java.

Learning Java will make you a more well-rounded programmer. In addition, Java is one of the most popular programming languages in the world, so it is in high demand among employers. It may help you develop skills businesses are always searching for in their developers.

With so many frameworks available, such as Spring, Hibernate, Struts, GWT, JSF, Grails, Vaadin, and Blade, it's challenging to know which one to choose. Start with becoming proficient in just one framework.

Using JavaScript, Node.js makes it easy to send and sync data between the server and client sides. Using the same language will make your code cleaner and more consistent. You can use the same naming convention, tools, and best practices.

If you're coming from a language with a lot of IDE integration, like Java or C#, developing Node.js applications may be difficult. To debug Node.js programs, execute node to launch the built-in debugger.

Python is a high-level programming language that is popular for its clear syntax, object-oriented design, and ability to allow program developers to create applications rapidly.

Python is a programming language that has endeared itself to many professionals. Data scientists, software engineers, machine-learning experts, and hackers love Python because of its flexibility, adaptability, and object-oriented features.

Master the basics of Python before moving on to more complex concepts. Learn about lists, dictionaries, and sets, as these data structures will come in handy.

What is Ruby on Rails?

Ruby is a well-known, versatile programming language regularly used for web scraping, site building, command-line tools, automation, and data processing. While you may have primarily heard of Ruby in association with Ruby on Rails - one of the most popular web development frameworks - it has many other applications. Ruby, released in 1995 by Yukihiro Matsumoto,  is often called a "language of careful balance.".

Use existing gems instead of writing code from scratch for more optimized code.

PHP is a server-side programming language that has gained popularity over the years. PHP is an excellent language for creating dynamic web applications since it works well with HTML and databases.

Make sure you have enabled error reporting if you're going to learn. It will save you a lot of time trying to navigate code you aren't necessarily familiar with, and you'll be grateful for it.

Write a small program (or expand an existing one) in which you reinforce the learning with applied practice.

C++ is an object-oriented programming language designed to have a low level of system dependence. It was released in 1985 by Bjarne Stroustrup.  C++ is so compatible with C that it will probably compile over 99% of C programs without changing a line of source code. Though C++ is a well-structured and safer language than C, it is Object-Oriented Programming (OOP) based.

C++ is a powerful programming language nearly identical to C and will run most C programs unaltered. However, C++ is a much safer language for systems programming and game development than C as it uses object-oriented programming principles.

C++ can be challenging for beginners, but it is compelling and versatile. If you are interested in learning C++, we recommend finding a good tutorial or course that will walk you through the basics of the language. Once you understand the basics, you can begin working on projects to practice your skills.

Kotlin is a language that runs on multiple platforms, is concise, safe, interoperable, and is easy to use with tools. It is a statically-typed programming language that primarily uses the Java virtual machine as well as  JavaScript or LLVM compiler infrastructure.

Kotlin's popularity among developers stems from its straightforward syntax and extensive features. Kotlin has a compact codebase that makes it a stable and consistent language for code development. You can easily detect codes at compile time which can be resolved before running the code.

Use an IDE that supports Kotlin, such as IntelliJ IDEA or Android Studio. Also, consider using a build tool such as Gradle or Maven.

Created in 2001 by Martin Odersky and his team, Scala is a general-purpose JVM programming language with its first public release in 2004. Scala is a high-level language that combines functional and object-oriented programming with high-performance runtimes. Scala is a powerful language that can use many of the same capabilities as Python, including building machine learning models.

Scala is different from Java because it supports two programming paradigms: object-oriented (OOP) and functional programming (FP). It's beneficial to master at least one language from several paradigms, such as imperative, logical, functional, and OOP, so you can compare and contrast them.

Scala isn't particularly easy to learn if you're a novice. Starting with a basic language like JavaScript or Python would be beneficial. Choose Scala when you need specialized libraries for concurrent distributed applications.

Perl is a general-purpose, high-level, interpreted, and dynamic programming language. Larry Wall developed it in 1987. There is no official Full form of Perl, but the most used expansion is “Practical Extraction and Reporting Language. “

Since Perl is syntactically similar to other widely used languages, it is easier to code and learn in Perl. Programs can be written in any text editor, such as Notepad++.

Perl doesn't require or suggest any particular programming approach, such as procedural, object-oriented, or functional—the interpreter and its functions serve as a single language definition.

Go, or Golang, is a Google-originated open-source programming language. The creators of Go wanted developers to have a programming language that allowed them to create applications quickly and easily. Go is used in servers, web development, and command-line interfaces and aims to be simple, high-performing, readable, and efficient.

Learning Go will be a piece of cake if you have prior experience with coding languages such as C or Java. Despite this preexisting knowledge, Go is globally recognized as simpler to learn than its competitors.

If you want to work in the cloud-based programming industry, Go is an excellent language to learn. Amazon Web Services, Kubernetes, and Google Cloud Platform (GCP) all support Go, making it a good choice for those seeking a profession in this area.

SQL (Structured Query Language) is a programming language that allows us to manage relational databases. A relational database is a kind of database that keeps track of and makes available data points connected. We can store information in a SQL table and access or change it.

SQL programming language is becoming increasingly popular due to its usefulness in data processing. Based on reports from overseas job portals and Geeks For Geeks, those with a mastery of SQL will be highly sought-after in the year 2022. The ease of learning and beginner-friendliness makes it an ideal choice for anyone looking to get into coding or data processing.

Understanding and researching SQL concepts and syntax is an essential skill for any self-respecting programmer. The SQL reference guide is an excellent way to study and familiarize yourself with the language. These guides usually contain everything you need to know about the language, from its syntax to programming best practices.

What is Spring Boot?

Spring Boot is a micro Service Java-based open-source framework created by the Pivotal Team and used to develop stand-alone and production-ready spring applications. It is a backend framework that allows you to bootstrap your application quickly. By using Spring Boot, you can skip a lot of boilerplate code.

Spring Boot is an excellent way for Java developers to create stand-alone, production-grade Spring applications that are easy to run. You can get started with minimal configuration without needing a complex Spring setup.

Dependency management is a tricky problem for large projects. Spring Boot solves this issue by providing a set of dependencies that saves time and trouble.

What is ASP .NET Core?

ASP.NET is a Microsoft-developed open-source software for building web apps, services, IoT apps, and mobile backend components. It allows us to construct internet applications, services, IoT apps, and mobile backends. The primary distinction between ASP.NET and ASP.NET Core is that they are cross-platform. By the way, it enables us to run on .NET Core or net Framework.

ASP.NET Core is a re-imagined version of the ASP.NET framework, built on top of the new .NET Core platform, that uses modern software design ideas. Although it is new in one way, .NET Core has years of widespread production usage. It has incorporated many features from the mature, stable, and reliable .NET Framework, which has been in use for almost two decades.

Use .NET Core for your server application when you need side-by-side versions of .NET per app, target microservices, use Docker containers, or have cross-platform needs.

Django is an open-source python web framework that helps you develop websites quickly, securely, and with clean design. It is a web application framework that provides all the components needed for app development so you can focus on new features instead of rewriting old code. Instagram, BitBucket, Mozilla, and other well-known websites are all created with the Django framework.

The Django framework is a wonderful choice if you're creating your software because it's a web framework with many essential features already included, so you won't have to write them yourself. This implies that you can create an app more quickly.

Start by becoming proficient in Python and work on a small project. After that, learn Django.

Which backend technologies should you learn first?

If you're looking to learn a backend programming language, any of the languages on this list would be a good choice. Many of these languages are in high demand and show no signs of slowing down. With so many options, deciding which language to learn can be tough. Our advice is to start by becoming proficient in one of the top 5 on the list and work on a small project. After that, learn some of the correlating frameworks. Once you're comfortable with those, you can start exploring other options on this list.