Prototype vs. Wireframe: How to Use Both in Design

It’s fair to assume that every popular web program or application we use today underwent several rounds of user testing before release. 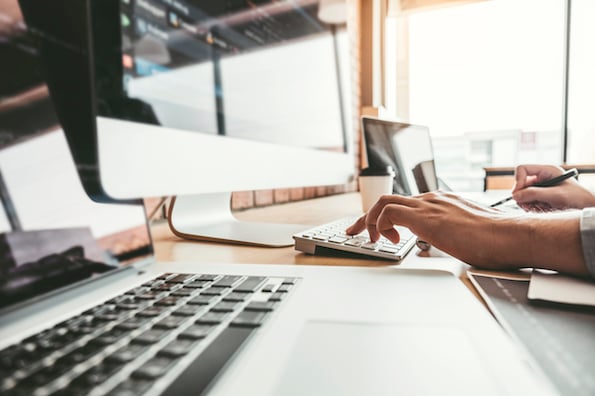 During the user testing process, user experience (UX) and user interface (UI) designers place a version of their designs into the hands of real users to ensure that the final product not only looks appealing but can also be used intuitively.

Working on a digital design project? You’ll probably encounter the terms wireframe and prototype, if you haven’t already. And if you're not a UX/UI designer, you may accidentally use these terms interchangeably.

It’s easy to see why: both are used for testing in the early stages of product development.

Wireframes and prototypes are design deliverables that represent the final product. Many believe their distinction lies in their fidelity, or how detailed they are relative to the final product. However, in reality, they are fundamentally different.

Wireframes can be differentiated from prototypes based on the following criteria: function, purpose, and type.

A wireframe is a two-dimensional representation of the initial product design.

Think of a wireframe in terms of what a blueprint is to a house. There are usually a few iterations, but the design begins as a rough sketch. As feedback is incorporated, the rough design is fleshed out to detail the fundamental visual structure of the product (or the app or website).

A wireframe provides a clear outline of the page’s structure, including the layout, necessary elements (buttons, links, and content descriptions), and — in the final stages — colors, images, and branding. Basically, a wireframe serves as a guideline for the overall direction of the project.

Below is a detailed, hand-drawn example. 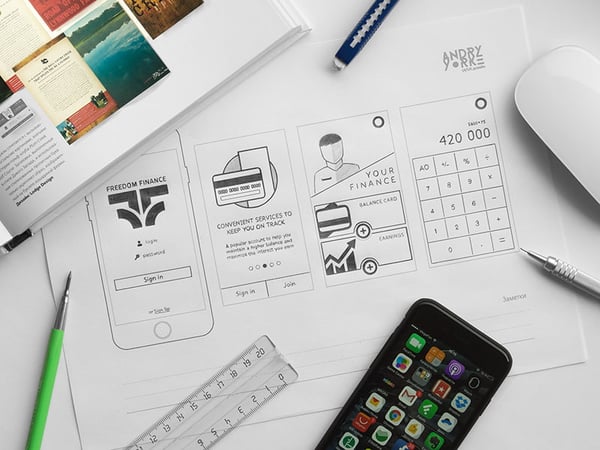 A prototype can be considered as the next stage of the design process — after the wireframe. It’s a working model of the application or website that more fully simulates user interaction.

To revisit our house analogy, a prototype can be likened to a model home. Potential homeowners (or users) can physically experience what it would be like to be inside the home. They take a tour understanding that it’s not the exact home they’ll live in, which will be eventually completed with final touches according to their feedback.

To put it another way, a prototype isn't the final version of a project, but it should be close enough to fully test the product before it goes out to consumers.

Both wireframes and prototypes are used for design testing. Note that you can’t adequately test your design with one and not the other. Feedback is necessary at both stages because the concerns raised are inevitably different.

Wireframes are used primarily to translate the abstract into the tangible, helping establish a product concept. At the wireframe stage, good designers consider the user flow as they create the visual structure. Then, their illustrations describe the flow of the app or website using arrows, notations, or a wireframe map. It is important to get a user’s opinion on this because what feels intuitive to the designer may be different than what the user needs.

Some designers skip the wireframe stage, going directly into the prototype. They might see it as an unnecessary additional step, especially if they are using software that merges wireframing and prototyping functions. However, wireframes can be useful for documentation and when working collaboratively.

Prototypes are more explicitly used to test the user’s journey; specifically, how the user actually navigates while using a program or app. During this phase, testers can pinpoint issues with flow. For example, they can uncover issues where a user is frustrated with too many clicks to reach the desired page or a particular layout that is not intuitive and difficult to navigate.

At the end of the prototype phase, you’ll want to run a simulation where users interact with the prototype before moving onto coding the project.

Both wireframes and prototypes range from low-fidelity to high-fidelity designs. As mentioned earlier, fidelity refers to how the product is depicted (or the “level of detail and realism” in the design).

Wireframes are often associated with being low-fidelity, but can move through a design development process that includes medium- and high-fidelity designs.

Low-fidelity wireframes can be sketched on paper or rendered digitally. They usually start out in black and white or grayscale but gain more detail (including color) and branding as they become high-fidelity wireframes. Aside from these additional details, the main focus of wireframes is to make sure the key elements are present and the flow makes sense from a visual standpoint. 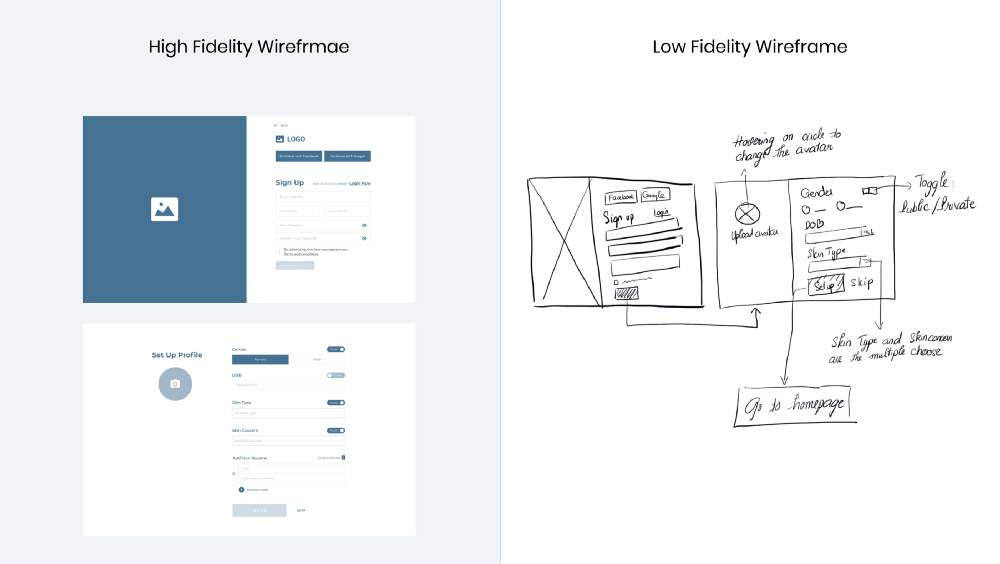 Wireframes are best kept as simple as possible to remove bias in testing. At the wireframe stage, designers are trying to test product viability above anything else. If testers are exposed to what looks like a very polished wireframe, they may feel uncomfortable being critical of something that appears already finished.

Both wireframes and prototypes range from low- to high-fidelity — although prototypes usually fall on the higher end of the fidelity spectrum.

The bigger difference between a prototype and wireframe is in how prototypes focus on user interaction. If you have limited time and resources, you might use low-fidelity prototypes. But your user feedback will only be as good as the elements users are able to test.

For the later stages of the design process, prototypes should be high-fidelity and dynamic, looking more like a fully functional website or app. Testing a design that’s close to done will provide you with the most relevant feedback from users at this stage.

Many popular digital design tools incorporate both wireframing and prototype functions. Designers can change from low- to high-fidelity on one platform, saving time — and, by extension, money. Some of the most popular tools include InVision, Sketch, and Adobe XD.

It’s important to note that while most of these tools can create beautiful prototypes and wireframes that become gorgeous, functional webpages, they can’t bridge the gap to push them out as a live website.

That’s where a content management system like HubSpot CMS can help you build and manage pages as you go.

Although similar, wireframes and prototypes are both important in keeping all project stakeholders on the same page. Both represent crucial pieces of the design process that yield the best possible version of your product.