Web Designer vs. Web Developer: What's the Difference & Who Should You Hire?

LEGOs are fascinating — bear with me here. 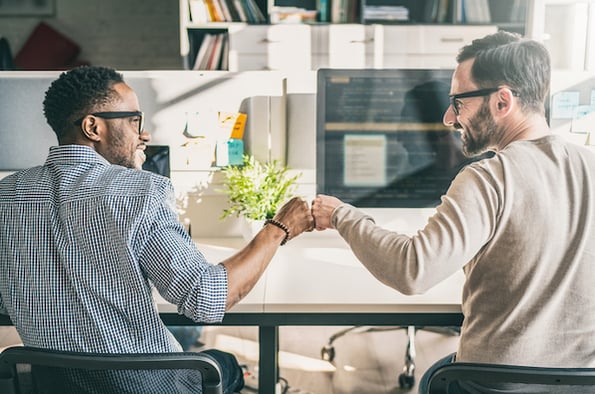 Think about the people who create LEGO sets. You probably have teams that pitch ideas, draw mockups, gather information from consumers, and build prototypes. At the same time, you also have teams producing product molds, engineering new LEGO pieces, and bringing ideas for future products to life. It’s a lot of moving pieces, and different people are needed at different times to make sure a new product is completed on time.

In a lot of ways, producing a LEGO set is very similar to building a website. When a business needs to design a site, there are people pitching ideas and using information supplied by their target audience to create an awesome user experience — these people are called web designers. There are also people who physically create the product, and spend the majority of their time coding new features and maintaining the backend of the site — these are the web developers.

Both roles are different but extremely important to site construction. Read on to learn more about their differences and when you might want to hire one over the other.

Web designers manage the look and feel of your site. They design the user experience and create an interface that’s aesthetically pleasing and delightful to use. Web developers, on the other hand, focus on functionality. They build the frontend and backend of your site so that it operates as intended and provides all of the features needed to be successful.

Read on to learn about more differences between these two roles.

What does a web designer do?

Web designers focus on the appearance of your site. Their goal is to make it aesthetically pleasing while also user-friendly.

Web Designers construct your site’s layout, create conversion-generating elements, and ensure mobile responsivity for all of your pages. They typically meet with clients before working on a site and discuss what type of site they want to create and what features they want to offer. Once this information is set, web designers create an interface and user experience that’s easy to follow and entertaining for the user.

To make sure their design is effective, web designers will conduct usability tests and will survey potential users for feedback. They’ll also stay up to date with the latest website trends and technologies to ensure their creating a modern and unique site experience.

When paired with a web developer, web designers are responsible for the look and feel of a site. Web developers, on the other hand, manage the site’s overall structure and functionality.

What does a web developer do?

Web developers build websites from the ground up. Their job involves a lot of technical work and experience with complex coding techniques and advanced programming languages.

Once the site is launched, the work for the developer doesn’t end. They conduct post-launch tests and provide ongoing support for websites after they go live. This includes regular site maintenance as well as correcting any bugs that might have been overlooked during the development process.

It’s important to note that not all web designers perform the same tasks. Most have unique specializations that narrow their focus to just one or two aspects of your website’s design.

Depending on where your website is in the design process, you may need to hire one, two, or all three of these roles to make sure its design is attractive and user-friendly.

Similar to web designers, web developers will also typically have a specialization or a focus. Here are the most common types.

If you’re trying to build a massive website, or if you have a big enough budget, you might want to hire both a frontend developer and a backend one. However, in some cases, a full-stack developer may be all that you need to create an effective website.

If you’re thinking about hiring a web developer or a web designer — or considering a career in one of these fields — you want to make sure you’re hiring the right person for the job. With that in mind, below are some of the skills needed to be a successful web designer and web developer.

Now that we covered what goes into being a good web designer, here are the skills needed to be an effective web developer.

Part of being a great web developer or web designer is mastering all of these skills. The other part is being able to effectively use the tools at your disposal. Let’s review a few of the most common tools that web developers and web designers use every day.

Here are some tools that web designers use:

There are various providers for each one of these tools. The ones that web designers use will depend on the organization they’re working for, their experience with certain tools, and their budget for a project.

Here are the most common tools that web developers use:

When it comes to calculating how much it will cost to build your site, you have to take into account that designers and developers typically are paid by the hour. In the United States, the average web designer is paid about $29/hour while the average web developer is paid $36/hour.

So, if it takes 40 hours to build your site, this would run you about $2,600. Depending on how big or how complicated you want your site to be, this estimate can increase or decrease based on the amount of time your designers and developers will spend on the project.

When to Hire a Web Designer vs. a Web Developer

Having both a web developer and a web designer can bring a lot to the table when it comes to building your website. But, you don’t necessarily need to hire both in order to create a successful website.

Depending on your goals and vision, you may only need to hire a web designer to customize your site. For instance, if you’re only looking to build a basic website, you might just want to hire a designer who can test its usability and provide feedback on your site’s layout and design. However, if you’re looking to build a highly complex website with advanced features, you’ll likely need a web developer who can bring your ideas to life.

The chart below provides a few different scenarios for when you’ll want to hire a web designer versus a web developer. 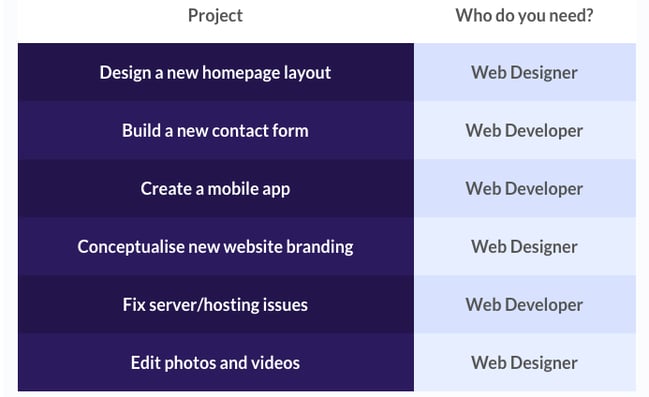 Do you need a web designer or a web developer?

The honest answer is: it depends. If you have a do-it-yourself mentality and want some assistance with making your site look and feel great, then you might want to hire a web designer. In contrast, if you have an ambitious design that requires a lot of time and effort, you’ll likely want to hire a developer to spearhead your site’s construction. And, in some cases, you’ll want both to make sure your site looks greats, works as designed, and is completed on time.

Both positions play an important role in site development, and each one can make your site stand out in different ways. To hire the right person for your business, consider what you want to do with your site as well as the information above, and seek out someone who understands your goals and can bring your vision to life.