Right about now, you are probably rolling your eyes as if to say, “How many times do I have to hear this?” The predictions about the mobile market in 2011 all but teed it up for 2012 to grab the crown for YIM (aka “Year in Mobile” for those of you lucky enough to dodge this topic for the last four years).

The YIM is a rare beast that has evaded us like the legend of Bigfoot, despite many claimed sightings. Many people and companies eagerly wanted to project each year prior to 2012 as the YIM, but weren’t patient enough to analyze data and wait. I’ve waited patiently to make my predictions, but can no longer hold my peace. 2011 was such a momentum shifter that I feel confident in saying, make way for 2012 – THE YEAR IN MOBILE, or at least the year when mobile will interrupt more personal conversations, lunches, dinners and family functions than ever before. 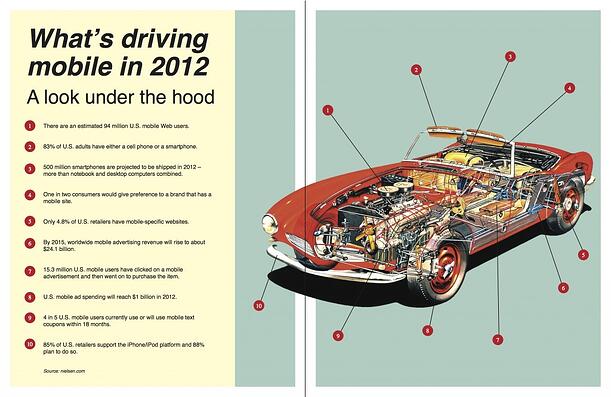 Not convinced? Let me present my case.

2011 was the year smartphones surpassed feature phone purchasing in both the United States and western Europe, with well over 50 percent of people now carrying smartphones in both regions. It’s all but a lock that this year will blow those numbers out of the water. I’m going all in on this bet. The Guardian recently reported that in late 2011, half the people owning a mobile device in the U.K. now have a smartphone, and they projected “it’s very likely that in the next two years you’ll see smartphones reach something like 90 percent penetration in the U.K.” With the U.K. just ever so slightly ahead of the U.S. in smartphone integration, we can soundly project upwards of 80 percent penetration in the U.S. by the same time. According to NPD’s “Mobile Phone Track” consumer tracking service, for the first time, a majority (54 percent) of all new mobile phone handsets purchased by U.S. consumers were smartphones.

In 2011, smartphone companies were besting quarterly sales and Christmas sales across the board as we transitioned into the new year. Take one case: Due in large part to the release of the Apple iPhone 4S, AT&T announced on December 7 that it sold approximately six million smartphones during the first two months of the fourth quarter, putting it on pace to smash the company’s quarterly sales record of 6.1 million units set in the third quarter of 2010. This is just one influence the smartphone is having on industry sales. Shall we also mention the record-obliterating ruckus smartphones have caused for manufacturers, app developers, accessory companies, service carriers, operating systems, software developers, phone wholesalers, internet phone markets, corporate marketing and sales and daily deals services like Groupon and LivingSocial (and I’m cutting the list short by stopping here...)? Just as feature phones are crushed like Godzilla cruising through a metropolitan area, 2012’s crystal ball projects personal computers as the next device in the way of global smartphone domination.

All of this can best be summed up in this statement: Ultimately, as the data reveals, feature phones may now have entered into the full-blown start of a precipitous decline from which the category of mobile phones will never completely recover. As Wired explains, “Smartphone adoption will inevitably increase, as prices drop, and manufacturers work harder to penetrate the market.”

2012 is here. Don’t let your traditional marketing and sales strategies get you down. Unless the Mayan calendar turns out to be right, I recommend you arm your clients with a mobile strategy that allows you and your company to be in the pocket of your audience.

Lessons in 2011 that could provide opportunities in 2012: