The two groups comprise the most coveted set of consumers.

They are future clients and customers. They will determine if a brand lasts or lags behind.

And they are a confusing group -- to brands (and their parents).

Facebook, Twitter, Tumblr, Pinterest, and a multitude of other social networks don’t hold their attention for long: the amount that people are accessing social networking sites is falling.

One valid idea on the reason for this decline is the rise of social messaging apps.

Snapchat's user base grew by 57% in the first three quarters of 2014, and Facebook Messenger grew by 50%.

As Facebook and Twitter have become inflitrated with brand messaging and users have become disillusioned with the idea that broadcast communication makes them feel more connected to friends and family, people have turned to one-to-one or one-to-few communication forms.

These apps have traditionally been ad free, but as the market matures, many founders are looking for ways to bring in revenue and increase the functionality and use of their app. They are looking to advertisers to fund this growth.

The Fall of Texting

In 2011, Pew Research reported that U.S. cell phone users send and receive 41.5 messages per day on average. When you drill down into specific age groups, those 18 to 24 years old send or receive 109.5 text messages per day. This data was released the same year that Apple announced its iOS5 update, which bundled SMS and iMessage. The later gave iPhone users the ability to text using the internet.

This prompted many U.S.-based carriers to offer unlimited texting, essentially giving the service away for free for power users. But that's not the case in many countries, which is why messaging apps became popular in countries such as Mexico, China, and Japan before finding more mainstream recognition in the U.S.

Consider this: WhatsApp, the most popular mobile messaging app, has an 8% penetration rate of mobile internet users in the U.S., while in South Africa, the share of mobile internet users who are active on WhatsApp is 78%. Hong Kong has a penetration rate of 71%, and India sits at 69%. Ernesto Piedras, director of a Mexico City-based telecommunications consulting firm, told Bloomberg Business that 90% of instant messaging is sent through WhatsApp in Mexico.

These apps are widely adopted across the world and have a large and active user base.

This should be compared with prediction on the SMS market. Its revenues and usage is expected to decline as mobile internet connectivity becomes the norm. Just recently, China’s Ministry of Industry and Information Technology released data on text messaging usage in the country. From January to May 2014, SMS messaging was down 18.4% from the previous time period in 2013. This is contrasted with mobile internet usage, which grew by 52%.

The next frontier is here. And many of these apps have options for brands to get involved.

New mobile and social messaging apps are released each month as companies try to capitalize on people's addictions to using their phones for communication. Tinder (dating), Whisper (anonymous message sharing), and QuizUp (social gaming) are just a few of these specialized apps focused on changing the way we interact with other people through our mobile phones.

The main contenders though are still focused on messaging -- either through text or visuals.

In February 2015, three of the top 10 free apps in the U.S. App Store were social messaging apps -- Facebook Messenger, Snapchat, and WhatsApp. Another mobile messaging app, Kik, landed in the top 18 free apps.

Most of these mobile messaging apps are similar in features -- one-to-one messaging, group messaging, stickers, and calling, but each offers a different approach or unique features that point to how marketers may be able interact with users on the platform in the future.

Here are seven leading social messaging apps for you to get to know: 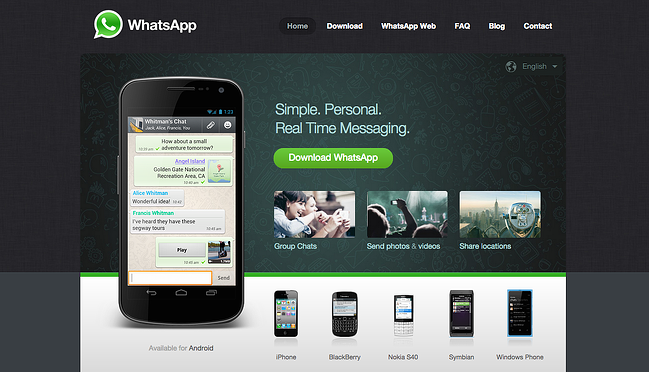 WhatsApp leads the social messaging apps, with 700 million active users as of December 2014. As a baseline, compare this to Instagram, which reached 300 million users that same month.

The app made headlines when Facebook purchased it for $19 billion in 2014 -- the app was only five years old. Before it’s acquisition, the company spent no money on advertising or marketing.

WhatsApp is free for users for the first year; then, users pay $1 per year for the service. It was originally launched as an SMS alternative for those under restrictive messaging plans. WhatsApp requires users to register with a telephone number, and it is testing out a VoIP calling feature. It also recently introduced a web app.

WhatsApp hasn’t introduced an advertising option for brands, and the founders have been adamant about the service remaining ad free. The company's line on advertising is cemented in its motto: No ads, no games, no gimmicks. However, the BBC used its Broadcast Lists feature to deliver news last year. The feature only allows for lists up to 250 people, and users must add the contact to their address book to receive messages. 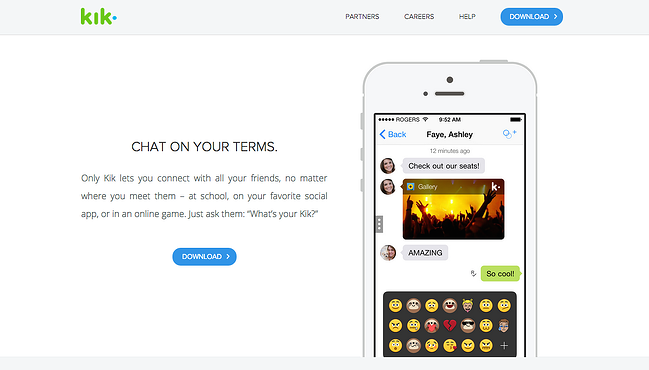 Kik has 200 million registered users and differs from WhatsApp in that anyone can chat with anyone else by finding the person’s username (The recipient of the message has to approve new contacts before seeing the person’s message.). Allowing a level of anonymity has attracted a younger demographic -- 70% of its users are between age 13 and 25.

Kik also has a built-in web browser, so people can share information from the web.

Kik’s Promoted Chats feature is where users can opt-in to receive messages from specific brands, such as Seventeen Magazine and Funny or Die. Brands can create canned responses that are triggered by keywords the user sends as the feature is a one-to-one communication form. In addition, brands can created Cards, which are mobile sites optimized for Kik. 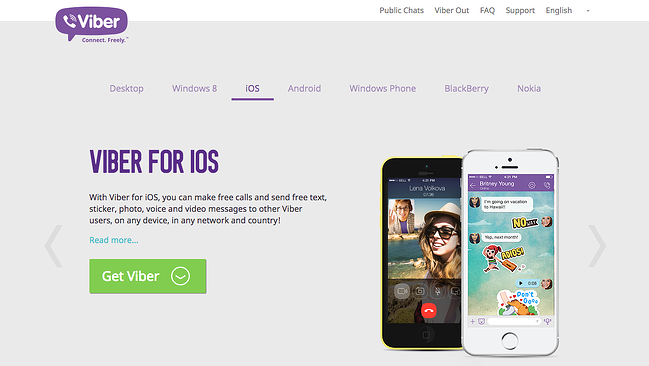 Founded in Cyprus by an Israeli entrepreneur, Viber is another popular social messaging app with a large U.S.-based audience. The app was acquired by a Japanese ecommerce company for $900 million in early 2014.

Viber allows for free calls to and from people using Viber, and you can use its ViberOut feature to make domestic and international calls.

Viber launched Public Chats in late 2014. The feature allows people to follow the chats of celebrities, personalities, or a specific topic, such as its Song of the Day group. Users can also download sticker collections from brands. (Miller Lite recently added a Game Day collection.) 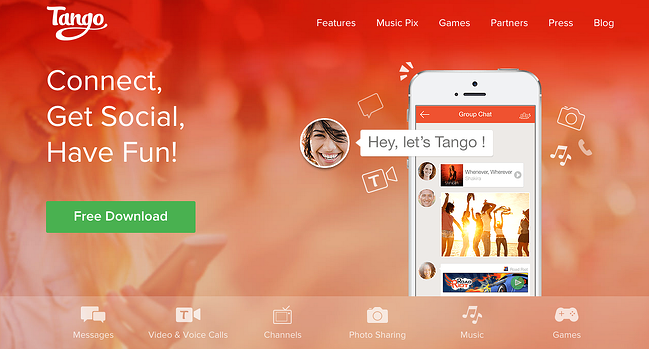 Tango provides messaging and voice and video calls. You can also play games with other users, and it integrates with Spotify so users can share and listen to music. 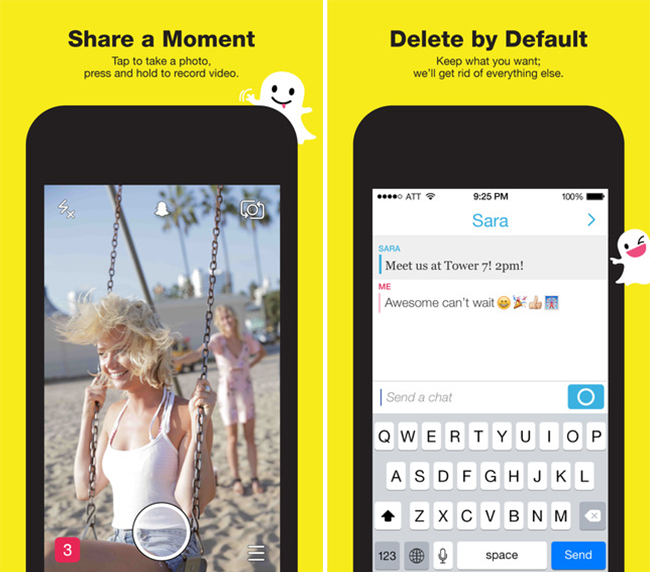 The ephemeral photo-sharing app has expanded in recent months to go beyond sharing disappearing photos. Within the app, you can record videos, draw on photos, and chat with friends.

Brands can place “snaps” in a user’s recent updates feed and be included in its Stories feed. The app recently launched Discover, where publishers add daily editions of photos and videos that disappear within 24 hours. Reportedly, these publishers are working with brands that want to advertise in an edition or sponsor a channel. 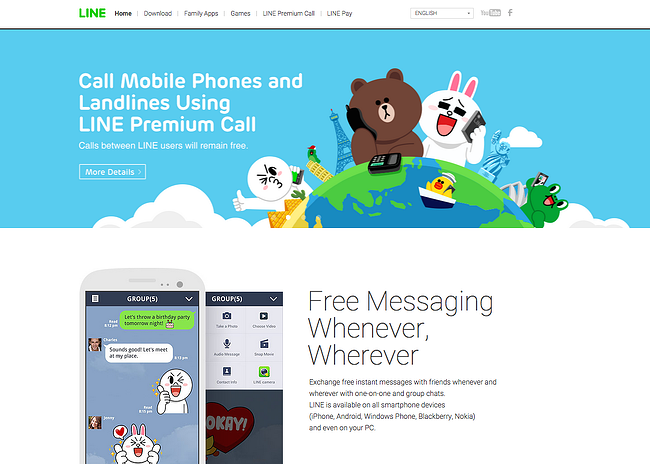 Line was founded in Japan in 2011 and has a large user base in that country. It offers one of the most robust feature sets of any messaging app: messaging, voice calls, a camera with filters, forums for topic-based chatting, and a timeline for sharing status updates. Users can customize the app with different themes and follow official accounts.

The app has 170 million monthly active users and 560 registered users.

Brands create animated stickers for users to download and themes to update the look of the app. Users can follow brands under the Official Accounts tab, and Line has an option for brands to send targeted advertising. The company recently launched The Line@ app, which integrates with the main app and allows businesses to communicate with Line users. 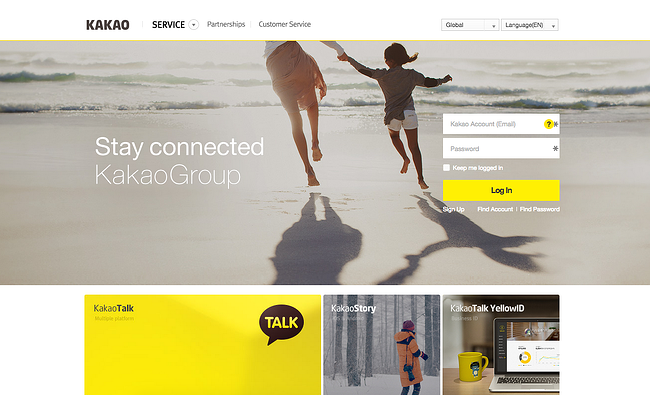 This social messaging app dominates the South Korean market and is used by many international Koreans to communicate with friends and family. KakaoTalk offers a desktop client for Mac and PC. The app offers free calls, multimedia messaging, a mobile shopping feature, a “places” feature for saving favorite locations and sharing them with friends, an event scheduler, and polling features.

KakaoTalk had 145 million registered users as of April 2014.

KakaoTalk integrates with an in-game advertising platform to deliver mobile ads, and it allow brands to create profiles on the social app in its Plus Friends feature. Like other apps in this list, brands can create and release emoticon packages for users to download.

How Advertisers Are Getting Into the Dark Social Game

One problem facing marketers looking to reach people through mobile messaging is the lack of analytics. There is little information on how people share content on these dark social platforms, and few large scale campaigns have been launched and analyzed for results. However, these platforms do provide read receipts and Snapchat gives advertisers information on views. When it comes to online advertising, it's definitely a better metric than visibility.

Huge, a Brooklyn-based agency, partnered with Onion Labs to create a Snapchat campaign that would run during the 2014 Super Bowl. The brand’s approach included creating simple images with witty captions that keyed into things happening during the event. The carmaker’s Snapchat received 100,000 views during the Big Game. 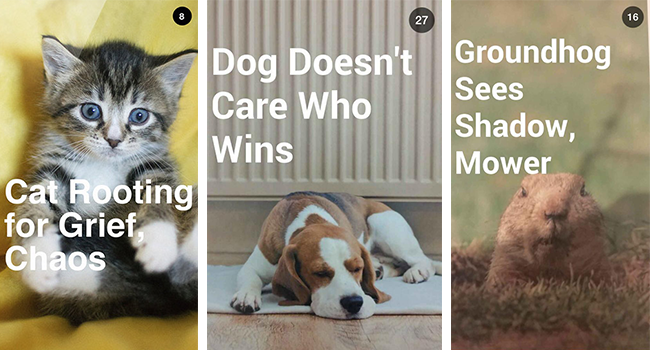 Kik and "The Giver"

In late summer of 2014, The Weinstein Company promoted its young-adult targeted film “The Giver” on Kik.

The campaign featured photos from the movie users could customize with stickers, a Kik-optimized card (basically a mobile website) with trivia, and the movie trailer. 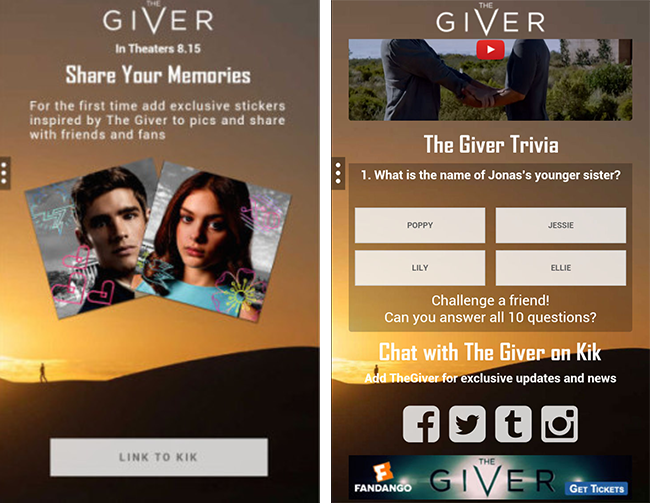 Line and "The Walking Dead"

AMC is promoting the 10th anniversary of “The Walking Dead” on Line with a set of stickers fans can download. The show has an Official Account on the app, and once a user adds the brand, it has a direct line of communication with that person through the chat feature. 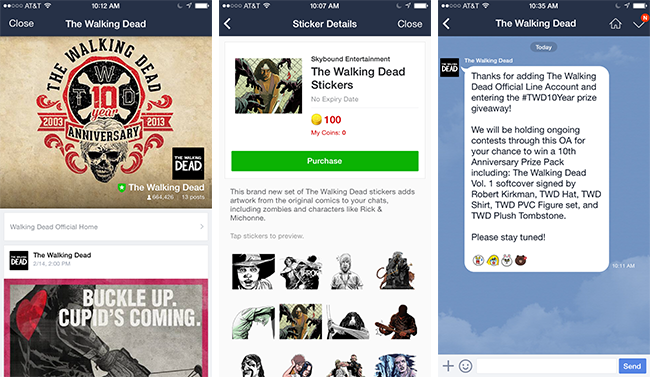 The Rise of Messaging Apps

These apps are already challenging cellular carriers and the way they do business. And at least for now, they are attracting users with a small set of features. It would be an easy jump for many of these to expand their feature set and go head-to-head with larger social networks.

These apps are still young. It's uncharted territory for marketers, but as that brand's agency, you need to be the first to understand how people are using these apps to interact and why this form of personal communication has become so popular. It's no longer just about what people communicate; it's about what tool they use to say it.

Discover the health of your client relationships.