Google Search "Plus Your World"

For as long as algorithmic search engines have existed, links (in both quantity and quality) have been a major factor in determining rankings. Search engines like Google considered the presence of many of these links to be human “votes of confidence” in pieces of content or whole domains, and as a result, ranked these sites more highly. Search engines can use links as a key shorthand metric to choose the best and most valuable pieces of content amongst millions of possibilities, and because the linking ecosystem was ultimately curated by humans, it was reliable. 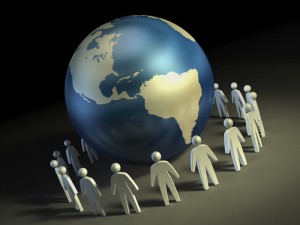 However, in recent years, there has been a fundamental shift in how people express this sentiment. While external links still exist and are important, far more people have an active presence on social networks like Facebook, Twitter and Google+, and are actively sharing worthwhile content in the same way that they once linked to it. What is different is that Facebook, Twitter and several of these networks are “walled gardens” and their data is inaccessible to Google, who is seen as a competitor. Aware that a key component of the logic behind its search index was falling out of date, Google launched +1 buttons and Google+, its own social network, in mid-2011. This was not an attempt just at competing with Facebook and Twitter, but also as a means of trapping data to feed its search algorithm.

Search, Plus Your World

On January 10, 2012, Google launched one of the most substantial updates to its search interface in history, titled “Search, Plus Your World.” With this change, all logged-in Google users will begin to see more personalized results drawn by the social networks they’ve created on Google+, Gmail, Picasa and other Google products. This will include a variety of types of content:

This announcement is not unexpected. Google has intended for Google+ to serve as the glue between its various products, and full integration with search is the true differentiator between the now-nascent Google+ and Facebook.

There will be changes to organic search. Five years ago, any user within the United States who performed a query got the same ten results to that query no matter where they lived or whether they had a Google account. A position one ranking on a keyword was universal. This has not been the case for some time, but search results are going to become increasingly disparate, user-to-user, city-to-city, state-to-state, and so on. While there is still a “base” set of rankings for any individual query, fewer and fewer users ever see this exact iteration of results.

This means that search is about to become far more social. Brands, products and sites that have been somehow shared or endorsed (via the Google+ network) by users will have an amplified voice within those users’ social networks. Similarly, brands and websites that don’t inspire may find themselves elbowed out of the first page of results.

Google has still been unclear on just how much +1s will impact its search algorithm outside of your social circle, and formally, that update is not part of this change. It is likely, if not certain, that this is coming as part of a future update. Therefore, while it is wise to maintain a presence on social networks (Google+ along with Facebook, Twitter, etc.) it’s also equally important to invest in building functionality and content on your own domain to drive likes and shares.

There is one other important point. While there are an estimated 90+ million Google+ accounts and 625,000 new users per day, the usage statistics for the service so far have been disappointing. This means there’s not much content being shared directly via Google+, which may reduce the impact of this change in the short term. It also means that much of the information being surfaced now is not necessarily relevant (i.e. results providing advice on pop music from someone in your professional network — not necessarily the best match of “content” and “friend”). However, Google is determined to make Google+ a success, and having many of these users see more Google+ content and shared content in their search results may serve as a constant reminder to use the service more frequently. There is some anecdotal evidence that Google+ content is receiving preferential treatment in search results. In addition, there are also 146 million current Gmail users (many of whom are logged in near-constantly), so the potential impact is massive even though Google+ hasn’t yet realized its potential.

This may seem overly simplistic, but websites (and brands) that inspire loyalty and offer content worth sharing with others are being given a gift. Those who don’t may find that smaller players who inspire more passion will begin to eat away at their visibility and traffic from search. People share things that are unexpected, educational and unique, and of brands to whom they feel a connection. This is a main reason why many large, established brands find themselves competing in search with at least one scrappy, upstart competitor. The people causing the social “chatter” assume that people have heard of the big brand, but that they need to learn about this new brand with which they identify.

Separately, brands that have not yet created a Google+ page should do so. More information can be found here.

Somewhat annoyingly, it is necessary to also add +1 buttons to your site to properly claim ownership of your business’ Google+ page, and this may present some design or development challenges. There is a significant benefit, however, as Google+ users that have your business in one of their circles will begin seeing your content in their actual search results. This is an amazingly useful tool for customer retention and driving repeat visits.

In short, Google+ is a very young product, but it is a product with the very ambitious goal of marrying the incredible success and effectiveness of Google search with the enormous but still not fully realized power of the social graph. It is also an opportunity for marketers and businesses to “reboot” their social marketing approach with a new platform and tool set. So, for those that haven’t taken social seriously yet, this may be the last chance to get in on the ground floor of something big, new and important.