Let Them Fail But Not Be Failures 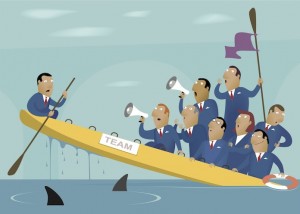 A few weeks ago, my wife invited me to go see a lecture by an author she’s been getting a lot out of lately: a motivational writer and speaker named Brene Brown. Seeing as how I’ve never actually attended a lecture — not even in college — I declined, positive there was something on ESPN I couldn’t miss.

After she left, I picked up one of Ms. Brown’s books and thumbed through it. I was struggling with trying to understand a certain management style at the time, and one passage in particular struck me.

“Shame corrodes the very part of us that believes we are capable of change.”

A large part of our jobs as creative directors — or any type of leader — is to be a motivator. To put people in positions where they can win. To do that, I have to be an arbiter, an anthropologist, an observer, a cheerleader, and, in the words of my friend Scott McAfee, managing partner at Sanders Wingo, I have to practice ruthless creativity.

To practice ruthless creativity, you have to be allowed to try, fail and get up again without risk of shame. Shame kills creativity. It kills spirit. It kills innovation.

In today’s analytic-driven, algorithm-in-lieu-of-creativity, quantify-qualify-and-ROI industry that advertising has become, there is no room for pain and discomfort. All of the systems we now have in place are built to create a perfect marketing society. Somewhere Orwell and Huxley are high fiving, albeit sadly. How often do you see some snarky, often anonymous reviewer post the word “Fail!” on a bad Facebook post or a review of an ad campaign that they deemed fell short of the mark?

Failure in itself is not a bad thing. In fact, it is quite the opposite. But failure’s little toady, Shame, who is always hiding in the shadows, is the thing that causes problems.

For instance, before any of us embarks on a new initiative for a client, a blank page on our computer screen reminds us that:

And round and round it goes — the merry-go-round from hell.

Some company cultures, and a very few people, are wired to expect motivation from fear. But I suspect in most cases, the people who fail, learn and try again are the ones who find their own brilliance in the end.

Shame is an insidious little troll. And most of us downloaded the software at an early age. For me, it was getting punched in the mouth on the playground in first grade. The kid knocked my tooth out, and I lost it in the grass. I was ashamed I lost the fight, and I was ashamed nobody would believe I lost a tooth. Okay, I was 6. Give me a break.

The point is we all carry the feeling of shame. And, except for the few of us who are truly delusional, we all fear it. So maybe the most effective way to separate shame from failure in the daily course of creativity is to:

This is especially important in today’s always-on marketplace. There is no time to sit around and study ads as if they were the Dead Sea Scrolls. A fear of failure is not only less healthy for the psyche, but also it is a cancer for the company as a whole. How many advertising agencies have lost clients because they couldn’t respond quickly enough to client needs and the marketplace simply because they were afraid to make a move, afraid they’d come up with the wrong answer?

One of my favorite recent examples is the tweet from Oreo Cookies during the recent Super Bowl blackout. “You can still dunk in the dark.”

Fast, smart, opportunistic and engaging. The greatest line ever written in advertising history? Nope. But the timing was what it needed to be. If they succumbed to the pressure of shame and fear of failure, they’d probably have just opened a job, put six creative teams on it and would be having night and weekend meetings to argue if the creative might offend children ages 5 to 11 who are afraid of the dark.

Believe me, I’m not saying give everyone a trophy just for trying. I’m not saying coddle, sweet talk or wrap your associates in a blanky. But if we want people to express their full creativity and potential, we need to give them permission to fail. And keep Shame locked in the crawlspace under the garage.

Remember that transformational leaders inspire creativity because they let others fail without letting them be failures.