How Accurate Is Your Agency’s Prospect Radar? 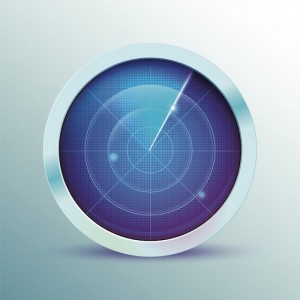 In my earlier days, as a VP of business development, I once had to call on a prospect 52 times before our agency was invited to pitch for anything. Conversely, the most recent client I picked up at my current firm took exactly one call and a meeting over beers. 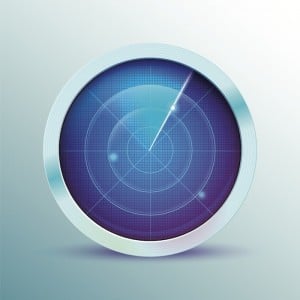 So what am I doing differently today to create that streamlined, one-meeting-and-a-beer pitch? It’s simple. I stopped being trapped inside a prospecting database and embraced a content-powered, sales-radar based approach.

Let’s be clear. I’m not advocating that you destroy your database or cease all traditional outbound biz dev efforts. Yes, they’re inefficient, but they do work, and you’ll need to keep driving new business while you’re creating your own painless prospecting platform. But you’ll need to switch sooner rather than later if you hope to compete in today’s invisible sale world.

The trend is clear. According to a 2012 DemandGen report, 77 percent of today’s prospects are hiding behind the anonymity of a Google search, which indicates they conduct online research before contacting vendors. The report went on to note that 51 percent of buyers claimed they proceeded through to short-list development before contacting vendors. Although this is only one report (there are many others), ask yourself how many of your agency’s prospects are online right now trying to find information to help them solve a specific marketing challenge.

To locate and identify these self-educating, invisible buyers, your agency needs to set aside your traditional funnel-based sales mentality. Instead of seeing your selling process as a funnel to be filled at the top with unqualified prospects that you’ll email, direct mail and call repeatedly until you score a meeting or a pitch, picture it instead as a sales radar — a content-powered radar that is constantly pinging the world around you and identifying and qualifying prospects worthy of being added to your database. 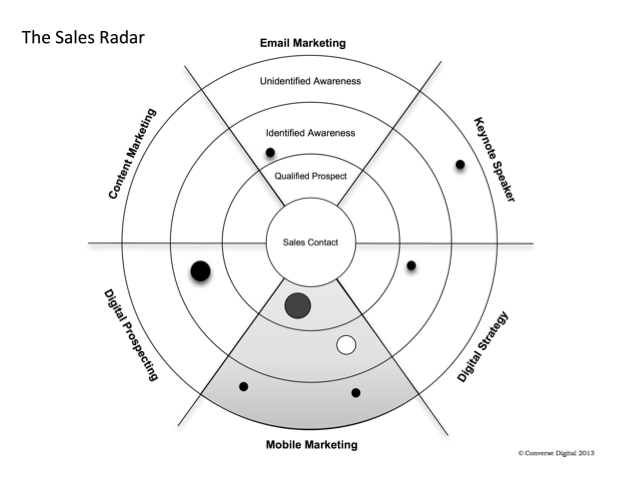 The biggest change to notice is that the radar is set up on a horizontal axis versus a vertical one. The second biggest change is the radar view plots prospects on three axes instead of one. Therefore, instead of assuming every prospect is moving down a linear path from unaware to doing business with you, radar selling acknowledges that prospects repeatedly enter/exit your sales funnel at different points and levels depending on their need.

Thus, in a radar mindset, every prospect’s place and value on the radar is a triangulation of three key data points.

First, the prospect’s position is plotted based on what type of information they are consuming on their most recent website visit or visits. Note that in this radar, there are six primary content sections on the radar.

Second, the prospect’s proximity to the center of the radar is determined by the amount and types of content consumed. In the outer ring, contacts have consumed a piece of information, but they haven’t provided any identifiable information; they are still unidentified. If a contact downloads something or subscribes to your agency blog or newsletter, they move into the second ring—identified. Once identified and cookied, they can now be tracked as they move on your site and consume additional information.

Third, you calculate the total number of pieces of content the prospect has consumed since first identifying themselves by downloading something from your site or registering for something. That is indicated by the size of the contact’s “blip” on the radar. The bigger the blip, the more active they’ve been on your site.

All of this information is captured and saved in your business development CRM tool of choice and used to create detailed dossiers on each prospect. Thus, your agency is able to sense when a prospect becomes a true biz dev lead based on prospects performing a set of predefined actions on your website. Once that happens, you can begin strategically targeted outreach, assuming they haven’t already contacted you to set a meeting.

Ten years ago, this approach wouldn’t have been doable. Remember, the sales funnel process was developed because it worked. The reason it worked is that information wasn’t as accessible as it is today, and prospective clients needed your agency marketing materials to educate themselves about the.

But that has all changed today. From simple purchases for personal use to complex business purchases, buyers are self-educating. This self-education trend creates the invisible funnel.

In order sell to prospects inside the invisible funnel, your agency needs to place significant efforts behind content creation and dissemination. By creating more content prospects can find in more places, radar-oriented selling agencies create more opportunities for prospects to intersect with the firm and its products or services. This creates the Propinquity Effect, which moves the prospect along the aware >> know >> like >> hire Propinquity Continuum, which powers a consistent, ongoing flow of new clients for your firm.

To learn more about creating your own sales radar, download a free chapter from my new book, “The Invisible Sale,” where I dive much deeper into this important strategic inflection point and discuss actionable strategies to help your agency.