Behavioral marketing has been called creepy and an invasion of privacy, but new research is finding that it can actually change how people perceive themselves.

A study recently published in the Journal of Consumer Research by Rebecca Walker Reczek, Christopher Summers, and Robert Smith found that consumers adjust their self-perception when they view an ad that they believe has been targeted to them. The ad is seen as a type of flattery -- as long as it close to matching up with the consumer’s idea of himself -- causing purchasing intent to increase as he wants to “live up” to the brand's perception.

The team conducted four different studies to better understand how using behavioral targeting and social labels, such as sophisticated or outdoorsy, influences self-perception and purchase intent.

For the first study, 188 college students were asked to spend 10 minutes creating a travel itinerary online. If they finished the exercise early, they were prompted to spend the remaining time browsing websites of their choosing. The researchers presented participants with an ad for ficticious restaurant featuring the tagline “Refreshingly Sophisticated American Classics.” Some of the students were told the ad was based on their website activity and the sites they had visited earlier, while others were told the ad was “targeted specifically to you based on your demographic information, including the gender and age you indicated at the beginning of the survey.”

The researchers found that those students who were shown the ad with the description that it was served to them based on their internet browsing history were more likely to say they had sophisticated food preferences. In addition, those who were behaviorally targeted were more likely to buy a Groupon for the fictitious restaurant.

In a follow-up experiment, the researchers showed students an advertisement for a luxury watch that was either a non-targeted or behaviorally targeted ad, with the distinction being made clear. Those people who believed the ad to be targeted based on their browsing history rated themselves as more sophisticated than the group who saw a non-targeted ad. 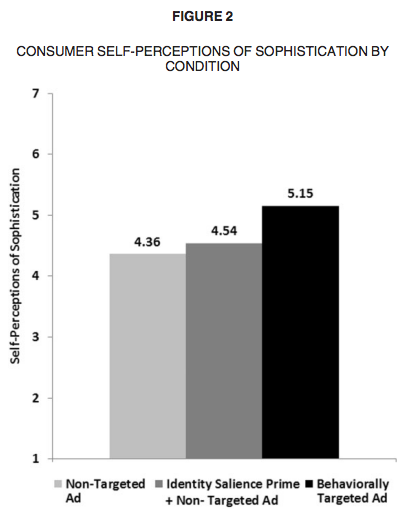 Basically, the advertisement helped to confirm a social label, such as sophistication, that the person previously assigned himself or recognized. By the brand confirming this label and stating that it was doing so based on the person’s previous actions, the person became more interested in buying the product and the ad actually increased the person’s perception of how “sophisticated” he is.

In a third experiment, participants were shown an ad for an environmentally friendly speaker. Those who believed the ad was served due to previous behavior rated themselves as more “green” after seeing the ad and were more likely to donate to an environmental charity.

However, they did find that the label being assigned to the person viewing the ad has to be within reason or “plausibly connected to consumers’ past behavior.” In a fourth study, an ad for hot chocolate was positioned as either for the indoors or the outdoors. If the person viewing the ad had no interest in outdoor activities or didn’t see themselves as "outdoorsy," the ad had no impact on purchase intent. 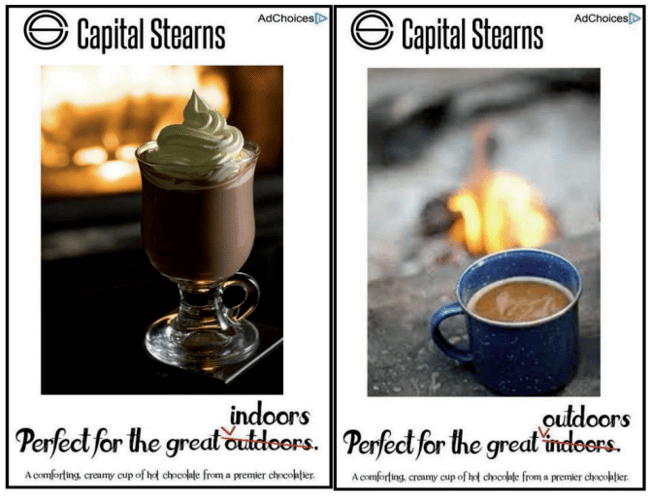 Basically, behavioral targeting won’t convince someone that they want to be more outdoorsy or more sophisticated if they don’t already use those labels to describe themselves. You can’t advertise someone into believing they are an outdoorsy person.

The study has interesting implications for brands when using behavioral targeting and those who have shied away from the tactic.

The authors of the study wrote in Harvard Business Review, “This targeting may change how consumers see themselves and make them feel like they already have traits implied by the ads. This suggests that brands with strong personalities might particularly benefit from behavioral targeting.”

This is especially relevant for brands and highlights the importance of establishing a brand purpose -- a reason for people to engage with the brand beyond its individual products. The researchers chose “sophisticated” as a label because it is seen as a positive trait -- and this in itself may motivate people to associate themselves with the label. However, you can make the connection that brands with a powerful “why” statement, rather than just a “what,” can more easily identify their social labels and use these to attract consumers. For example: Apple attracts people who “think differently,” BMW brings together adventurous drivers, and Johnson & Johnson is for the caregivers in our lives. These attributes and personality traits are easily transformed into social labels that consumers want to identify with.

One issue with the approach is that the person has to be aware that the ad being delivered is based on their previous browsing behavior. Specifically, they had to recognize the Digital Advertising Alliance’s AdChoices icon, the blue triangle that consumers can click to gain control over how their information is used in targeted advertising. The icon is served more than 1 trillion times per month, yet fewer than 1 in 10 people know what the symbol means, according to a report by Kelly Scott Madison in 2015. A study done in 2013 by Parks Associates found that the AdChoices icon was recognized by 6% of survey participants, an increase of 1% in three years. However, a study done by TRUSTe last year found that 37% of people are aware of the AdChoices icon.

While these numbers are conflicting, there are still too few consumers who are educated about the icon and their ability to control the behavioral targeting done by advertisers.

This highlights another question: Should brands make it more apparent in targeted advertising, content recommendations, and other brand messaging that the information being served has been selected based on the consumers’ past actions, such as the web pages he has viewed, the links he has clicked on, his purchasing behavior, and other signals? This was key to the study as the ads being shown were not actually based on online behaviors. Rather, it was the perception that they were that influenced the viewer’s self-perception and therefore his intent to purchase.

It is worth considering how a statement acknowledging the use of data to make more relevant recommendations and ads for consumers can be used to increase interest. It might be as simple as stating: These posts are recommended based on your browsing history, or Based on your previous purchase, you might like ... .

In addition, the study is interesting in that it shows how advertising can change the way people perceive themselves, therefore influencing their purchasing decisions. It's this knowledge that can help a brand move a consumer from feeling ambivalent about a brand to becoming a buyer.

Determine quickly if a prospect is a good fit for your agency.