How to Deal With Negative Nancy's Comments in Social Media 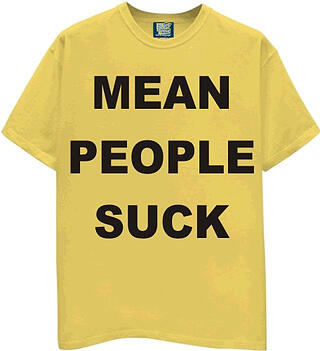 While brand-bashing is nothing new, the tools of the web and social media make the comments from these meanies even more lasting and impressionable. And because some social networks like Yelp and Twitter make it easy for people to set up fake profiles, the anonymity that people can achieve on the internet makes some more comfortable to lose all sense of decency, respect, and good manners. So much for mom's lesson , "If you can't say something nice, don't say anything at all," huh?

So what's the best way to deal with those Negative Nancys who crop up from time to time? The answer isn't to give up participating in social media . People will still say mean things; you just won't be around to defend yourself! Rather, the best way to react is by using a tactic that every PR professional and customer service representative learns right off the bat. Kill 'em with kindness!

5 Ways to Kill Negative Nancys With Kindness in Social Media

1. Don't delay. Don't let negative comments linger. The more time you let them go unanswered, the more time others have to see that someone has complained and you haven't responded. Address negative comments as quickly as you can to prevent them from bubbling up into something potentially more damaging. A negative post on your Facebook wall or a tweet at your company's Twitter account, for example, is much less of an issue than a nasty blog post, which can have a much longer lasting effect. Responding quickly will show the naysayer you're listening and you care. It will also alert others of your dedication to your community members.

2. Be apologetic. If someone is complaining about your products, services, or anything else for that matter, say you're sorry. It doesn't matter if their complaint is warranted or not; you're better off taking the "customer is always right" approach. It doesn't make sense to get in a public cage match over just one complaint, and others will respect you for apologize up front. Chances are, if the Negative Nancy you're dealing with is complaining over something silly, others will realize that, too and won't think anything of it.

3. React publicly first, then take it privately. If someone is being particularly difficult, take your communication with them to a private channel. First respond publicly, whether its via a tweet or a comment on their Facebook wall post, and then send them a private message so you can chat with them over email or the phone, explaining to them you'd like to discuss the matter in a way that offers them a more personal experience. This way, you give them the attention they're vying for without making your interaction public for all to see.

4. Share your appreciation for their feedback. Treat complaints as constructive criticism or feedback. Sometimes that's all they are. People want to be heard, and they want to know they've been heard. After you've apologized for their unsatisfactory experience, let them know their feedback is appreciated and that you'll seriously consider their suggestion for improvement. Then actually follow through. Send their feedback to your product team or the appropriate person within your organization.

5. Ask them how you can help; then help. If the comment you're dealing is just blatantly offensive and lacks context, tell the commenter you're sorry they feel the way they do and ask them how you can help make the situation better. One of two things will happen. They'll either reply with something you can actionably deal with, or they'll be so taken aback that you replied and have nothing more to say. Either way, you'll have responded tactfully.

6. Pick your battles. There are some people out there who make noise just for the sake of making noise. They're attention-seekers, and they just want to stir up some controversy. It's important to decide what's worth responding to. Does this person have a following? Are other people responding to what he/she has to say? It's important to keep these types of people on your radar and monitor what they're saying , but it might not always be worth engaging with them.

In what other ways do you deal with Negative Nancys in social media?