This article is probably less classically informative than our last few SXSW posts, but in this event, hearing from creative/comic Ze Frank was something I wanted to share.

Many of you may never have heard of Ze (pronounced 'zay') before; I had in passing (partly from his 'How to Dance Properly' fame), but didn't know what the hubbub was about.  He shared thirty minutes of stories about content he has created over the past ten years and then, aided by Bostonian Scott Kirsner , answered a variety of odd and great questions from the crowd.  Below are a few of the things I saw and heard that left some impression, be it laughter or a new way to think of content creation . 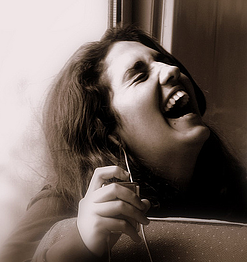 A fan whose little girl often got scared of monsters under her bed asked for help calming her daughter down.  You could just say, sing to her, or you could create a song for her.  That's what Ze did.  It's not fancy, but it's fun and funny and most of all, reminds me that every day is a chance to enjoy the ups and downs of life.  Here's my favorite part; have a listen: " at least I don't suck at life, I keep on tryin' despite ... and that helps me get over it ."

Crowdsourced content creation that lends a feeling of  community ...

A request from a fan for a song to help her get over day to day anxiety resulted in a very simple lyric "Hey you're OK, you'll be fine, just breathe".  The creative came in when Ze asked fans to send him their own recordings of this line from around the globe.  The result? A really simple chorus of international voices that envelop you like a virtual hug .

Ze explored the idea of emotional content online and shared ways that people were expressing their pain and loss by reaching out and communicating.  He is currently thinking about how that works and it seems like he has found ways to share the emotional without exploiting the private.  I look forward to seeing more of his work in that arena.

The Q&A time was priceless, mostly because in classic comedic fashion, Ze called out the audience asking him questions just as much as they challenged him.  But the one question that stuck out was a young guy who asked Ze about taking risks online and publishing so rapidly. Paraphrased: "How do you get over the anxiety that your stuff is going to suck?"

Ze admitted that just like the rest of us, he knows some of it may suck and some even does, but he 'resolves to live on the edge of anxiety of having no ideas left.'  So rather than worry about it, he just creates and creates some more, throwing ideas against the wall and experimenting to find the combinations that resonate with his audience.  If that ain't inbound marketing , I don't know what is.