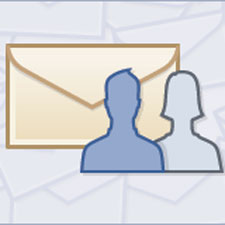 Today the rumors that Facebook is going to offer a new messaging system turned into reality. Yes, the social networking giant is going to provide the option of @Facebook.com email addresses, but this is only one part of the company’s announcement. Facebook’s new messaging system is not about email; instead it revolves around the idea of unifying and prioritizing messages.

Additionally, Facebook announced that they were intentionally going to drop threaded messages and instead organize messages via people. This means that you should be able to see all the conversations that you have had with a friend, regardless of the type of message that was being used for the conversation. In organizing messages by people, Facebook was able to create what the company calls a social inbox, an application similar to Gmail’s priority inbox . It is a system that shows you the people and messages that are most important to you and obscures the less relevant ones. Though these features launched today, they will be rolled out to users around the world over the next few months.

Facebook's Mark Zuckerburg explained that this new messaging system is not an email killer. Instead, it is a system that supports a shift in messaging habits. In his presentation, Zuckerburg pointed out that children in the high school age range don’t use email because they think it is for old people.

Facebook’s messaging system will likely not have an immediate impact on email marketing, but it highlights a trend in unified messaging that email marketers should become aware of and start planning for.

1. Sender Consistency Will Become More Important - While everyone won’t run and use Facebook’s new messaging system, it will likely set a bar for many other applications that will “borrow” some of its features. One feature that is likely to end up in other applications is the organization of messages by person. If this type of organization becomes widely used, email marketers will need to carefully organize and think about who the sender name on their email messages should be, in order to break through the clutter of an already crowded inbox.

2. Lead Nurturing Themes Across Emails Will get More Notice - With inboxes organized by message senders, the theme across multiple messages becomes more important. In current email marketing, the recipient sees only the current message with previous messages sitting in other folders. When you remove the folders and look at the messages all at once, it will be even more important for marketers to think about the information timing and relevance for each person on their list.

3. Messages Need to Work in All Formats - In a world where people can access messages on their mobile devices, it is critical that corresponding marketing offers also work properly in different formats. This is why mobile optimized landing pages and messages will need to be baked into the email marketing process.

4. Prompting Interaction Becomes More Important - With a social inbox to help prioritize message delivery, email needs to become a more socially-driven communication channel. If users can interact with your message and even respond to it, it is likely your future messages will receive better placement in the social inbox.

What are your thoughts on the new Facebook messaging system?