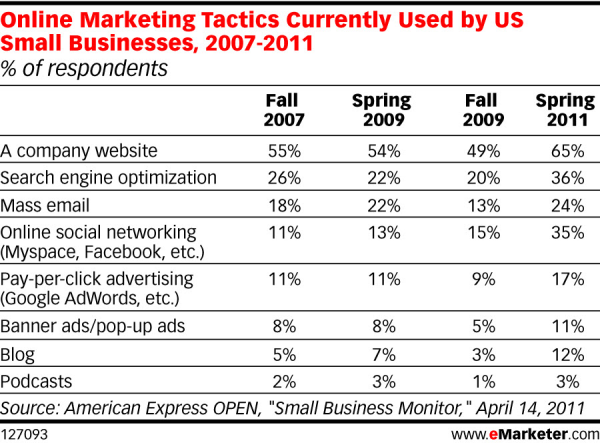 In 2011, four out of five US businesses with 100 or more employees will use social media marketing. That’s a dramatic change from 2008 when just 42% of companies marketed via social media, according to research from eMarketer . As consumer usage of social media continues to increase in the US and around the world, marketers have transitioned from cautious engagement to full deployment.

Small businesses are continuing to increase their use of social media marketing, and now nearly half are using it to find new customers , according to one survey.

The spring 2011 edition of the American Express OPEN “Small Business Monitor” found the use of social media for marketing was up over previous years. More than a third (35%) of US small businesses reported using online social networking for marketing, up from 15% in fall 2009. In addition, 12% of respondents were using blogs as a social tactic, nearly double the figure from fall 2009.

The leading reason for using social media, according to the September 2010 edition of the survey, was to increase the exposure of the business, and American Express OPEN found that more small businesses were turning to social media for customer acquisition. By spring 2011, 44% were using social media to help their businesses, up from 39% in September 2010. They were focusing on the top social networking sites for those efforts.

As a small business, what are you doing to get more customers from mainstream social media networks?