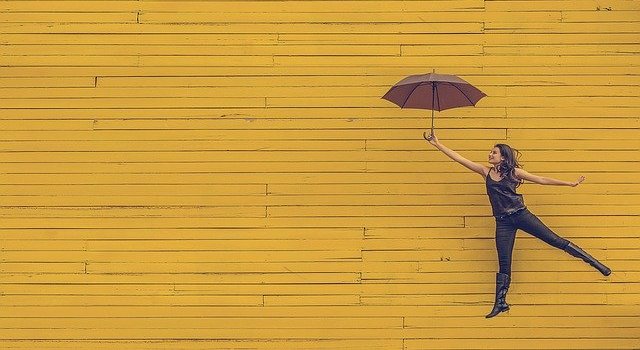 It’s easy to say that having a reliable sales forecast is important, but it can be really hard to actually create one. If you’ve struggled to forecast sales for your company, read on--this blog post is for you!

How to review your forecast report in HubSpot

Before we dive into the details of forecasting, it’s important to note that you need a robust sales process in place first. Your sales process is going to be the basis of your forecast, and if it isn’t well defined, you aren’t going to be able to forecast very well.

If your sales process isn’t rock solid, stop reading this post and hop over to How to Design Your Sales Process in HubSpot CRM.

Once you’ve got your pipeline and processes in a good place, head to your sales dashboard and look at the deal forecast. It’ll look something like this:

This report shows the amount of forecasted revenue for deals in your deal pipeline. It calculates that forecast by multiplying the deal amount of each deal by the probability of the deal it’s in. So if you have a $1000 deal in a stage that has a win probability of 10%, it gets calculated as $100.

This is a simple forecasting system that will give you a pretty good sense of how you’re doing--assuming your probabilities are set up right and your deals are all in the appropriate stages. But sometimes that isn’t safe to assume.

If you find that your deal forecast isn’t very accurate, here are a few things to try.

How do your salespeople know when it’s time to move a deal from one stage to the next? If there’s any ambiguity here, different reps will move deals at different times, and that’s bad news for your forecast.

For example, a typical deal stage might be called “Demo,” and the sales reps can say, “It’s in the demo stage because I gave them a demo.”

That’s accurate enough, but it doesn’t say anything about how much the prospect has progressed toward buying, and it doesn’t give the sales rep any direction about what comes next. We called our buyer-centric deal stage “Product Explored,” and we could define the exit criteria as:

Now, instead of the sale moving to the next stage as soon as the rep walks away from the demonstration, the rep can only move it to the next stage if they answered the buyer’s questions, scheduled the next appointment, sent a recap email of what was discussed and what the next steps are, and received a response to that email confirming the buyer has that same understanding. And you, as the sales manager, can say, “Hey, I saw you moved that deal into ‘Product Explored.’ Can I see the email where the buyer verified your next steps?”

Once you know the exit criteria for each stage, you can set those up as required properties for the stages in your deal pipeline. When you edit your deal stages, you’ll see an option to add properties to each stage: 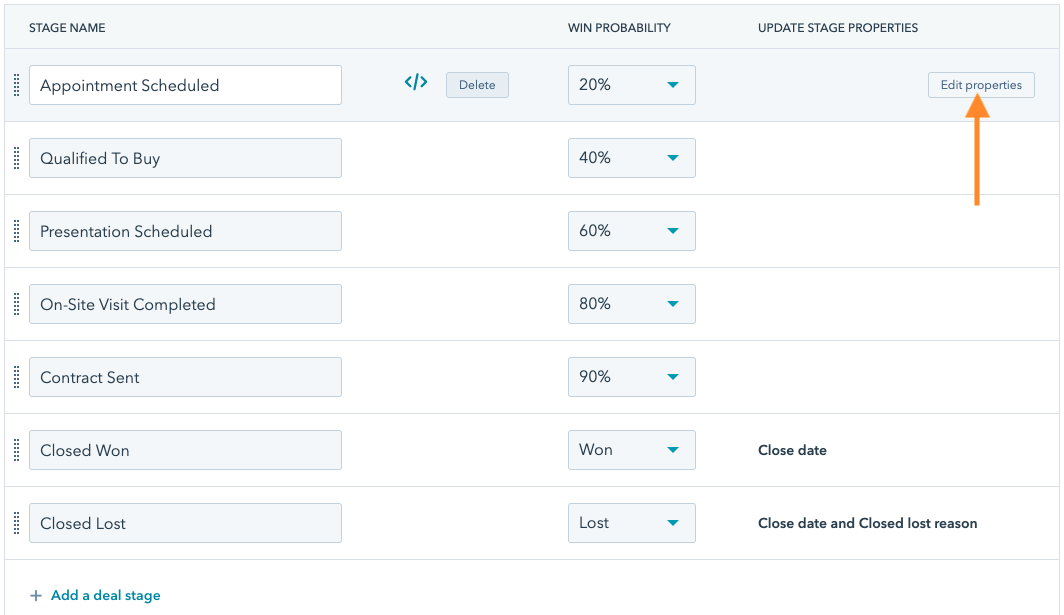 When you add properties to a stage, then anytime a deal gets moved to that stage, a popup will ask the rep to fill in those properties. Like this:

By implementing exit criteria, you can ensure that your reps are all following your sales process in the same way. That consistency will greatly improve the accuracy of your forecast.

Identify Stale Deals and Close Them

One thing that most salespeople aren’t especially motivated to do is to move a deal to “Close - Lost.” Sometimes it’s obviously the right thing to do, like when a prospect explicitly says they aren’t interested in buying, but sometimes there’s no clear indication that a deal isn’t going to close. Many salespeople, being optimists, will leave deals open indefinitely, and these deals plug up the pipeline and throw off your forecast.

A little bit of automation can go a long way in correcting this problem. You can create a “stale deals” workflow that will identify deals that need to be closed out. It might look something like this:

In this example, if a deal hasn't changed stages in more than 30 days, or if it was created more than 90 days ago, or if its close date is in the past but it's still open, a notification email is going to be sent to me (let's pretend I'm a sales manager) and to whoever owns the deal. This way, I as a manager can sit down with the rep who owns the stale deal and talk about it.

Please understand, this isn't a tattle-tale workflow. Sometimes a deal is stuck and a rep needs coaching, and this is a great time for the sales manager to step in and help. Other times, the rep needs to be persuaded to let the deal go. Either way, this is an opportunity for manager and rep to come together and reach a shared understanding, and that's always a good thing.

Collect a Confidence Rating for Each Deal

One thing that makes forecasting difficult is that most salespeople don’t see it as their job. Forecasting is something their manager or a sales ops person does. Because of this, if the forecast turns out to be wrong, sales reps assume it’s because of a mistake of the person who was forecasting. But in reality, an inaccurate forecast is often a symptom of bad behavior on the sales floor.

Here’s one simple trick for helping reps feel more ownership over their deals without overburdening them with new processes: Require a confidence rating on each deal at each deal stage.

A confidence rating simple asks the rep how confident the rep is that this deal is going to close. You can create this as a custom property. I recommend a dropdown with five options. It might look something like this: 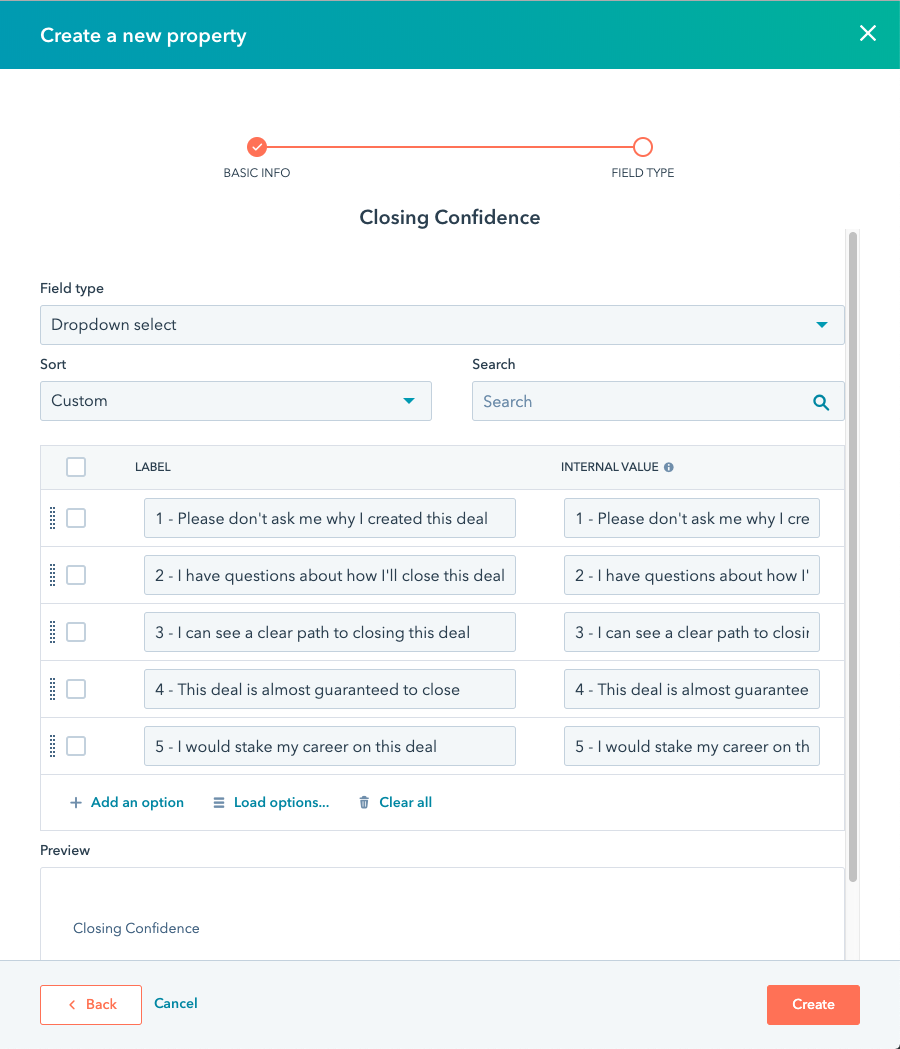 Once you’ve created this property, add it as a required property to every single deal stage except closed won and closed lost. That way, every time a rep moves a deal, they’ll have to evaluate how confident they are that it will go the distance. And make it clear that it’s okay for confidence to go up and down throughout the process. The goal here is just to get reps thinking about the deals they have and to help them realize that they might be investing too much time into deals that they don’t have a lot of confidence in.

The great thing about implementing a confidence rating is that it will often change the behavior of individual reps. Nobody wants to be working a deal that’s rated as a 1, and very few people will consistently rate deals a 5. Asking for confidence encourages reps to reflect on what they’re deals actually mean.

This will give you a more conservative forecast that only takes into consideration the deal your team are confident are going to close.

In addition to all the tools and techniques we've discussed so far, Sales Hub has a dedicated forecasting tool.

The forecasting tool gives you a forecast for each paid Sales Hub user in your account, and it breaks that forecast into three categories: Commit, best case, and pipeline.

Commit is the most conservative forecast and only looks at the deals that are almost certain to close.

Best case includes all of the deals in the commit category as well as some other deals that are expected to close if everything goes as planned.

Pipeline is the total value of all the deals with close dates in the current period.

These categories are stored in the Forecast Category property, and their names can be customized. So instead of building the fully custom property as discussed above, you can use this standard property.

Inside the forecasting tool, you can drill into individual reps to see the deals they’re working on. This is an excellent way to run one-on-one meetings with reps. 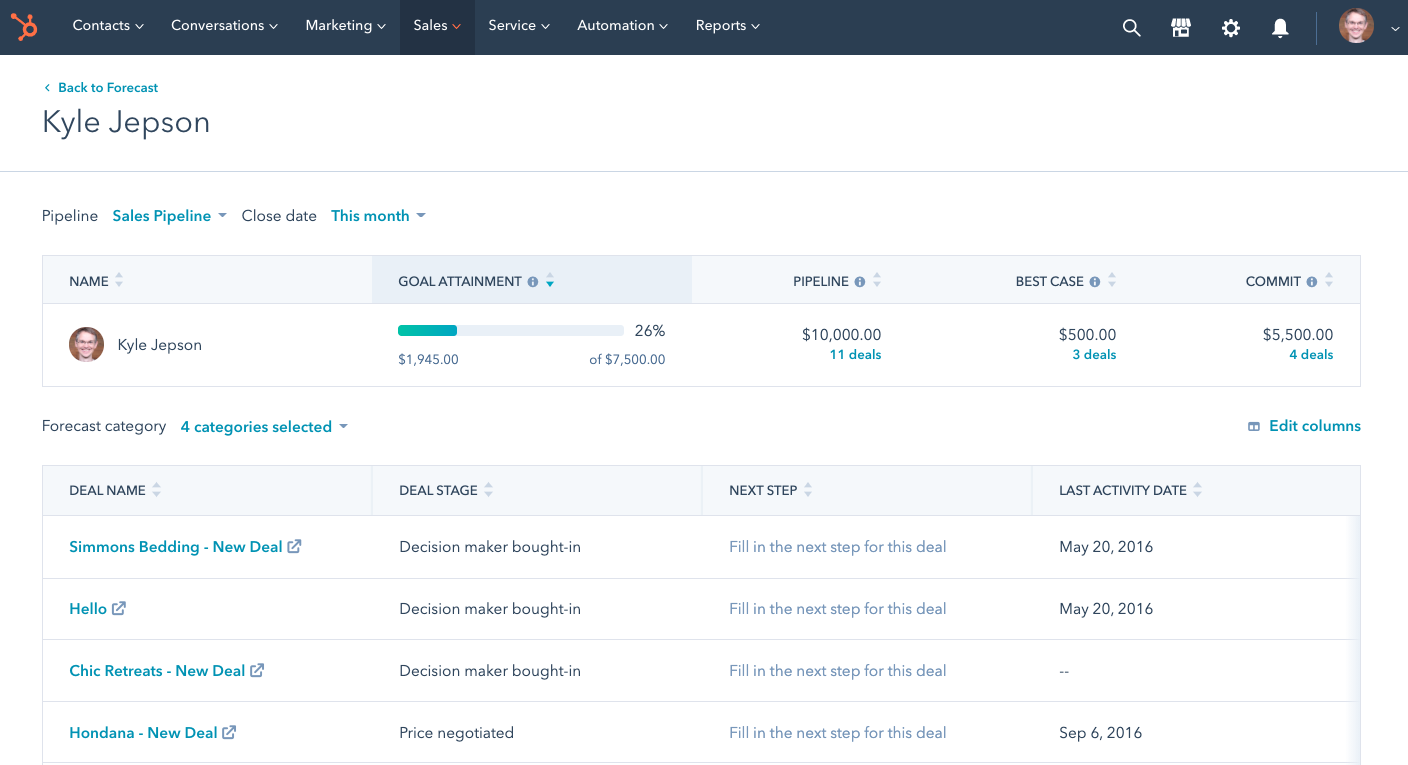 In this view, you can add next steps for each deal. This is stored in a deal property, so as the rep works the deal, they can always see what they’re next step should be and updated it as things change.

Bringing your forecast together

Using some combination of these techniques, you can improve the accuracy of your forecast dramatically. Give them a try and let us know what you think!