Prove the Value of Your Marketing Efforts With Campaign Reporting

How do you know if your campaigns are successful?

What information do you look at to determine their success? How do you know which contacts you reached, or if those contacts are old or new?

Knowing what's happening with your contacts during a campaign is a crucial part of creating and proving revenue for your business.

And if you can't track that, how can you be sure your marketing efforts are successful?

First, What Are Campaigns? 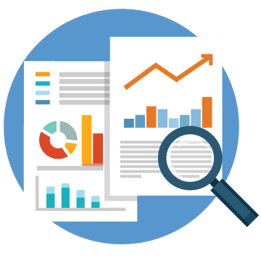 Want to learn more about your contacts? Take the Understanding Your Contacts lesson.

Before we dive into how to find the value of your marketing efforts, let's take a step back and discuss what campaigns are.

A campaign is a marketing initiative focused on reaching a specific goal. Campaigns tend to be focused on one type of persona. This persona is sometimes broken down into a segment of contacts who you're trying to send a single message to or drive a specific conversion (action) from.

Using different types of assets like blog posts and emails, you're nurturing these contacts to take action, and your campaign is where you're focusing all that information. 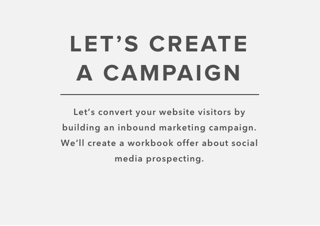 Take, for example, an event you have coming up. Maybe it's a webinar, an in-person training, or another type of event that's focused on educating your users about contact management.

It's a time-bound event you have a date for, but it's part of a larger initiative for your marketing team. The short-term push of the campaign is to get people to register for your webinar, but the long-term goal is growth around contact management.

Using the campaign tool in HubSpot, you can group all the different associated assets together, and manage and analyze them together. You can tag each marketing asset (landing page for registration, emails, social messages, blog posts for promotion, etc.) with the same HubSpot campaign.

Now you can start to see where the value of your marketing efforts lies.

This example shows where you can tag the campaign on a email asset.

Let’s take a deeper look into campaign strategy and the new analytics tool that supports it.

What's Your Campaign Strategy? And Does it Work?

How do you make campaigns that people love? And how can the campaign tools help you see the value that was produced?

Successfully running and tracking campaigns means you can:

When you can show the sales team what a contact has already done and pass them off with this information, you can close the loop of what worked for that contact.

In addition, when you track a campaign, you can see if it helped sales close a a lead or not. This is key to both optimizing future campaigns and proving their ROI. Both of these things help you analyze the success of your efforts for both marketing and sales.

There are two key measuring points to track your marketing efforts on:


Tracking the impact of a campaign.

When you look at the campaign as a whole, you want to ask yourself: Did you hit the goals you set out to hit? How many leads were generated? Did you have existing contacts engage with it? These questions help you see the big picture impact of your campaign.

These overall metrics are the ones you'll share with your team, and they'll help you with the second measuring point: Optimizing.

Comparing and optimizing the campaign's assets.

After you've looked at the big-picture results of your campaign, start to compare and contrast the individual assets you included in the campaign (the landing page for registration, emails, social messages, blog posts for promotion, etc.).

When you measure this stage of your campaign, look at which landing page received the highest conversions. Which blog posts produced the most engagement? Which emails were opened the most? These are the more specific metrics you can look at to guide your next campaign.

Now that you know the two ways you can measure your campaigns, let's look at the campaign tool itself inside HubSpot.

How Does the Campaign Analytics Tool Work in HubSpot?

The new campaign analytics tool helps you with two keys areas in your campaigns:

Campaigns are now shown in the tool as true conversion paths to show you how your contacts went through the information you shared with them.

The two pieces of data you can now measure in the campaign tools are:

We talk a lot about optimization and improvement in the world of inbound marketing. The same thing goes for the campaigns you run. How do your campaigns compare to last quarter’s or last year’s?

Just like the assets (emails, landing pages, blog posts, etc.) you include in the campaign, you want to improve the whole campaign as well.

You can now prove the value of one campaign over another. Take, for example, two similar online events you're hosting. After you run the first campaign, you'll now be able to compare it with the next one you run to see which assets performed better.

Think A/B testing for a lot of different content at the same time.

You can now choose your own adventure with the campaigns you run. You can select whether you want to see the information in a bar or area chart, and then select the date range for the campaign(s) you want to analyze.

Take the information you want to measure and view it in the most efficient way possible.

Boosting efficiency by showing both old and new contacts.

In addition to being able to see the conversion path of your campaigns, you can increase efficiency by seeing the engagement and influence they have on your contacts, both old and new.

There are three areas where the campaigns tool focuses this information:

Now you can see a list of the new contacts that were created by a campaign. These are your new leads coming in that are being attracted to your business by the campaign. There are two ways this data can be seen:

In addition to seeing new contacts, you can see influenced contacts.

Not all your campaigns are designed to generate net new leads, but some are there to influence and continue to nurture existing contacts further down your funnel.

Now you will can see the contacts that were influenced by a campaign, and which assets influenced them. 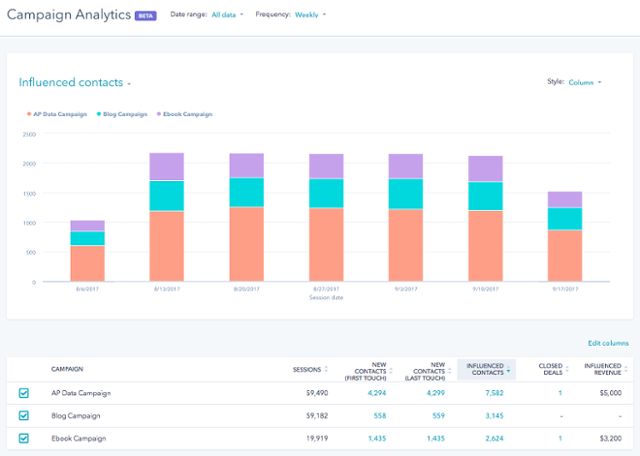 Revenue of a campaign

In the new world of campaign analytics, the next time a deal closes, you'll be able to see everything that touched that deal because it will credit that campaign with influencing the deal.

This concept of assigning credit to several touch points on the way to a conversion is called multi-touch attribution. Think, "Hey, sales team and C-suite, last month's webinar campaign influenced $8,000 of closed revenue." How freakin' awesome is that?

Some things to keep in mind when using the new campaign tool.

There are a few things to keep in mind if you're using the current version of campaigns.

Want to know more about the campaign tool? Check it out here.

Take your learning to the next level and attend SD Inbound Marketing's live webinar on How to Create an Automated Lead Nurturing Campaign.