The Anatomy of An Epic Congratulatory Ecommerce Email

The Boston Red Sox are in the World Series of Major League Baseball. Since HubSpot is a Boston-based company, this is big news here. The excitement is palpable! Inbound ecommerce marketers know that getting to know and tailoring your messaging to what matters to your audience is key to profitable relationships. Let's dissect how City Sports, a sports retail store that sells online and in 23 locations around the country, executed this beautifully.

I'll start with a suggestion, since everyone has room for improvement:

The first thing we notice is that the email is basically one giant image. Since many email inboxes disable images from being displayed by default, it's not always a good idea to have it be an entirely image-based email. The recipient might miss out on the rest of the beautifully executed elements if they open it and just see blank boxes.

Another reason not to use large images -- especially when sending a timing-relevant email -- is that you may end up catching people on their mobile devices where wide images don't render very well. The recipient ends up doing a weird z-scroll back and forth across their device's screen to get the full impact.

Images do tend to get a higher click-through rate than text links, so it definitely makes sense to include bold, exciting graphics. It just might help to not make the entire design dependent on their rendering properly.

If you are going to use large images, you always want to use "Alt-Text" which is the text that the inbox (or website browser) will display if images fail to load (either due to a technical reason or because they're being blocked). In this example, you can either use the Alt-Text to explain what the image is so people know what they're getting if they load it, or you could get even more creative. Depending on how well they know the psychographic dimensions of their buyer persona (for example, how well they respond to humor -- because not everyone's audience responds well), the marketer could even have made the anchor text say something like "Enable your images chowdah head! I worked hard on these graphics!"

Once I enabled images, the full glory of this email is revealed, and we can really dig in: 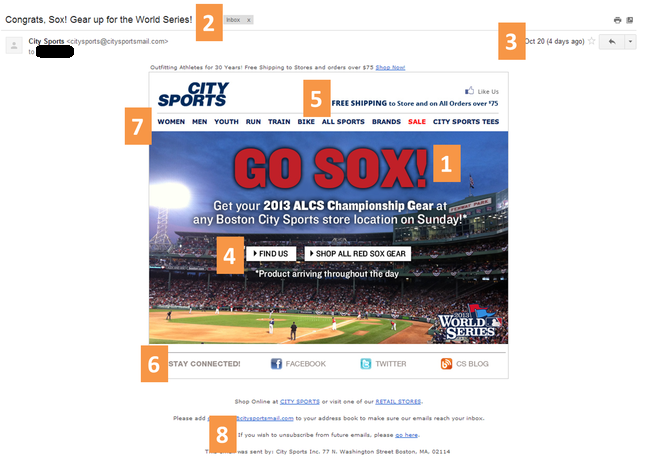 If you're not from Boston, you may not realize that we rarely refer to our home-team as "The Red Sox", instead usually just shortening it to "The Sox". Talking to people they way they talk is a good way to personify the brand (City Sports is originally a Boston-based company, and I imagine there's probably a real person who's really excited about the victory that worked on this email). Authenticity and connecting with your buyers is a good way to make them feel comfortable, and create an emotional response that can let them persuade themselves to buy.

I don't actually know if they sent this email to their entire list or not -- I hope not. While it was perfectly targeted to me, being a Boston-resident and Red Sox fan, they probably have customers around the country that may or may not be Red Sox fans. There are very few occasions when an ecommerce email marketer should send an email to their entire list -- you usually want to send emails to each segment that are targeted to their buyer persona characteristics as well as where they are in their buying cycle for a given product.

For me, however, it worked. I was pumped when we won the ALCS Championship and the message couldn't have been better.

If they did send it to their entire list, they may have turned some people off. Ignoring the fact that some of the people on their list may have been Tigers fans and actively upset, a large segment of their list probably just doesn't care. Either they're not a baseball for or just not a fan of either team. Sending an irrelevant email to a customer is even worse than sending none at all.

How could they have known who to send this to? Well, they should start with purchase history. Pulling a segment of their database for people who have bought Red Sox gear before -- or at least those who have visited Red Sox gear product detail pages or categories -- would be a great way to start. Also, if they are converting pre-transactional contacts, they can simply ask "Do you like baseball? What's your favorite team?" You'd be amazed how much information people are willing to give you if they know you're using it to make their buying experience easier and more relevant.

DirecTV actually does a great job of this. One of my colleagues is a Green Bay Packers fan, so living in Boston makes it very hard for him to find a place to watch the game. He had, apparently, mentioned this at some point to DirecTV when he was signing up for their NFL Sunday Ticket package (which lets him watch games not shown locally) as the main reason he was signing up for the DirecTV service at all. When he was moving apartments a while later and tried to cancel, their customer service rep was able to see that on his account and say "Don't you want to be able to watch your Packers play this Sunday?" Talk about listening to your customers!

By sending emails to your customers that appeal to the things that really matter to them, you'll dramatically increase sales. After all, I'm not a fan of T-Shirts; I'm a fan of the Boston Red Sox!

Although my screenshot shows 4 days ago, this email went out minutes after the game ended. I'm not sure if they had two versions ready, if they were planning on only sending an email if the Sox won, or if they have a magic time machine that allows them to compress several hours of work into a few seconds, but they got this email out the door quickly.

This is key because their target customers here were riding a massive emotional high right after the game. By getting to them before that euphoria faded, they were able to get past some of the logical blockers that prevent customers from buying things by using the massive emotional response we all had to the win. Granted, getting this email today would still appeal to me -- but I would at least take a while to think about buying something now.

They also included the caveat that gear would be arriving throughout the day, which is appreciated. It makes sense that they wouldn't have ordered inventory just in case, and by making that clear they avoided me getting angry if I had gone into their store first thing in the morning only to find they had no actual gear to buy yet. Then again, that's another reason I buy online -- they'll ship it when they have it without me having to risk disappointment.

What I really loved most about this email was the simple, clear, concise calls-to-action within the email itself. What they wanted me to do was clear! Centered in the middle of the email, two buttons (with a nice contrasting color to the background) tell me I can find their locations or go shop all Sox gear.

There was no "click this button if you love the Red Sox" tom-foolery either. When I clicked both of those links, they both took me exactly where they said they would - one to their store locator and the other to a page full of Sox gear. A sure-fire way to alienate your email subscribers is to send them somewhere other than where you told them they'd be going. Whether due to nefarious intent or simple laziness, ecommerce marketers need to avoid being dishonest with their CTAs -- and City Sports delivered here.

The subject line was also clear and aligned with the offer inside the email. They could have played around and said "Did you see that game?" or "Do you love kittens?" or any number of strange, misaligned subject lines that would confuse me, but they didn't. They shared their congratulations and got right to the point -- that I need new gear for the World Series!

It's a source of annoyance for me how much emphasis consumers put on free shipping, but they really, really love it. A study by Deloitte found that consumers are 69% more likely to shop at an online retailer who offers free shipping. I'm pretty sure that City Sports, like many ecommerce websites, is probably building the cost of free shipping into their products and I'm just paying for it that way, but it does have a significant and measurable impact on order completion. So they, wisely, included it prominently at the top of the email.

The Red Sox nation is a fandom like any other and by definition social. Social networks, especially networks like Twitter, are all about shared experiences and a natural fit for fandoms. In fact, if I were them I probably would have included a real customer's (permission based) Instagram shot or something of them wearing Red Sox gear and having a great time at Fenway. I may also have included direct links to social chatter like #RedSoxSwag (not sure if that was a real hashtag or not -- if it wasn't they should have made it) so that people could hop right into the conversation.

At any rate, the fact that they have clear, simple buttons to connect and engage is a win for them.

This part truly impressed me. They managed to fit a top-navigation into the email design without making it terribly obtrusive. It's always good to give people clear, concise direction on what you want them to do, but it's also nice to give them easy options if they have something else in mind. They linked to a variety of categories that, again, actually went where they said they would.

I hate it when companies make it impossible to unsubscribe. In fact, I'm fairly likely to just mark you as spam and move on with my life if I can't figure out how to unsubscribe. Most consumers don't know how damaging spam reports on emails are to the deliverability of a brand, and therefore won't put a lot of thought into how much they're hurting you if you don't give them another choice.

Not to mention the fact that it's the law. The CAN-SPAM law was excellently and unobtrusively complied with in this email. And for that, I thank them.