7 Behaviors That Reveal Our Obsession With Technology

If you've ever taken a subway somewhere, then you've probably noticed something a little peculiar going on.

People are completely and utterly absorbed -- but not in conversation with their neighbors. They're absorbed in their devices: smartphones, tablets, laptops, etc.

With over two billion people using the internet worldwide, 144 billion emails being sent each day, and the average user spending 3.2 hours a day on social networking sites, it should come as no surprise that technology is beginning to change the way we behave.

Some changes have been for the better, while others have us longing for times when things were a little simpler. Either way, technology has an undeniable hold on the way we act, think, and respond to things. Check out these examples of behaviors that can be attributed to tech.

7 Behaviors We've Picked Up Thanks to Technology

Is there a wrong way to watch television?

I'd never put much thought into it until I found myself six hours and an entire bag of chips deep into the first season of Friday Night Lights on Netflix.

I felt ashamed after having to insistently assure the folks at Netflix that yes, I was still watching, but I found comfort in knowing that I wasn't alone in this behavior.

Netflix recently launched a promotion that actually encourages users to celebrate their "binges" with #bingebrag announcement cards. (Yes, like birth announcements or "save the dates" ... but for your obsessive television watching habits.)

While Netflix's promotion is undoubtedly a little silly, 9 out of 10 people admit to engaging in binge viewing, according to a new survey by TiVo.

Binge watching television has even become a treasured pastime for many people around the world -- so much so that Samsung recently announced a promotion called "The Catch-up Grant." The contest will pay one winner to go to Thiksey -- a Tibetan monastery in the Himalayas -- to watch uninterrupted television for 100 days.

For some, that sounds like the perfect getaway. Others reminisce of a time when you simply tuned in to a show every week.

We've all been there. You're carrying out your day as you normally would and suddenly you hear -- or feel -- a rogue vibration. You check your phone, but there's nothing there. False alarm.

What's that all about?

Phantom vibration syndrome, or phantom ringing, started as somewhat of an internet discussion amongst cellphone users, and quickly turned into an area of interest for many researchers and psychologists.

"Phantom vibrations are this unusual curiosity that speaks to our connection with our phones,” explains clinical psychologist David Laramie.

And while a handful of conflicting explanations and hypotheses for why we experience this feeling can be found online, I struggled to find one definitive answer.

Laramie suggests that it's a generational thing. In other words, he believes that those who grew up with cellphones may experience it more frequently, as the anticipation for receiving a call or message has almost become second nature.

Another psychologist -- and chairman the School of Psychology at the University of Sydney -- Alex Blaszczynski attributes the sensation to electrical signals.

"I expect it's related to some of the electrical signals coming through in a transmission, touching on the surrounding nerves, giving a feeling of a vibration, " he explains.

Whatever the case may be, you're not alone in experiencing it. In fact, 89% of undergraduates from the University of Indiana, along with 68% of the medical staff at a Massachusetts hospital reported that they'd experienced a phantom vibration, according to respective studies.

According to the Oxford English Dictionary -- to which the term was added back in 2013 -- FOMO refers to the anxiety we exhibit when "an exciting or interesting event may currently be happening elsewhere, often aroused by posts seen on a social media website."

While this feeling is common amongst teens -- 47% of teens between 13-17 years old feel uneasy or nervous when they learn friends or peers are doing something they’re not, according to a study by JWTIntelligence -- many adults are feeling the effects of this technology-induced anxiety just the same.

Don't believe it? Check out some of the real-life #FOMO that marketers who missed out on this year's INBOUND event were experiencing on Twitter:

When I look at all the #Inbound15 tweets today. . . #FOMO pic.twitter.com/lnnwB3c5Iv

Wish I was at #INBOUND15 - looks awesome! Enjoying all the tweets #fomo

4) Checking Your Phone Over and Over

How many times a day do you check your phone?

At this point, I've been working on this article for about an hour ... and I've checked my phone at least four times for no reason. It didn't light up. It didn't ring. It didn't vibrate. Yet I felt compelled to make sure that I wasn't missing anything.

While this may seem obsessive, according to a Gallup Panel survey conducted among nearly 16,000 U.S adults, 41% of study subjects admitted to checking their phone a few times an hour: 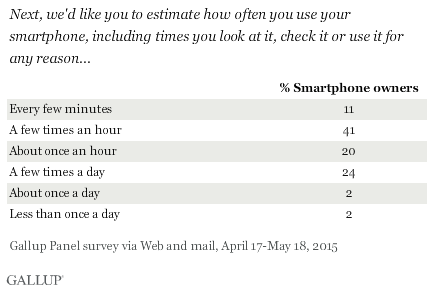 What's driving us to check in?

Nir Eyal, author of Hooked: How to Build Habit-Forming Products, might have an answer. He uses a 1950's study from B.F. Skinner to illustrate a cognitive quirk known as the variable schedule of rewards. In the study, Skinner observed the way in which lab mice responded to random treats. The mice were trained to press a lever that would dispense either a small treat, a large treat, or nothing at all. The more treats they received, the more they pressed the lever.

When we look to our phones, we're searching for something that will stimulate us -- things like a text message from a friend, a Facebook Like from a significant other, or an email from a family member. As we grow used to receiving these rewards from our phone, we get in the habit continuously checking in there to receive these rewards.

These days almost every action we carry out via our smartphone requires a swipe, tap, or a combination of the two.

That said, it should come as no surprise that our brains are beginning to recognize this new behavior. According to a Swiss study of the University of Zurich, the repetitive finger movements we use on our smartphone's touch screen are actually changing our brain's sensory-processing area.

The following video -- while horrifyingly hilarious -- serves as a great example of how the swipe and tap technology is becoming the norm:

This go-to solution is right up there with "unplug it and plug it back in" on my advanced list of troubleshooting techniques. It's also an all-too-common habit of anyone who spends time online.

Often times, when a page doesn't load within a second's time, we refresh it. The reason? Our attention spans have grown shorter than that of a goldfish, according to a recent study by Microsoft. While we were able to at least hold a thought for 12 seconds in 2000, it seems that the mobile revolution has assisted us in reducing that number down to just 8 seconds.

As a result, we've grown incredibly impatient when it comes to website load times. In fact, every one-second delay in page load decreases customer satisfaction by 16%, page views by 11%, and conversion rates by 7%, according to research from Aberdeen Group.

Sure, it sounds a little ridiculous, but it's happening ... a lot. In fact, at the 2014 Google I/O conference, it was reported that Android users were taking 93 million selfies every day.

Between the advent of the reverse screen smartphone camera, the selfie stick, and the ease of sharing brought about by social media, selfies have become a form of self-expression that doesn't seem to be going away.

What changes in behavior have you noticed as a result of technology? Let us know what we missed in the comments section below.