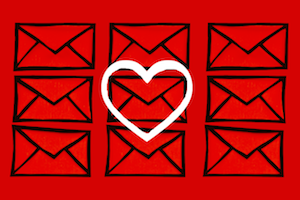 We pass on most because we want to make everything you read worth your time. Since you -- yes you, the person reading this very post -- have taken time out of your day to visit our site, we better make sure we're giving you something that's up your alley. So that's why we'll pass on most of what comes through our inboxes.

But this last month, we got one of the best pitches I've ever seen. It was so good, I couldn't not share it with you all. Because if you're trying to grow your business, chances are you'll need to pitch someone at some point -- so get out your notepad.

Meet Bryan Harris, founder of Videofruit. You've probably already seen what came from this pitch. If you're interested in an in-depth look into how he preps to pitch people, read his post here. Basically, his method is based on Gary Vaynerchuck's Jab, Jab, Jab, Right-Hook methodology. Instead of pitching people directly, he gives value without getting anything in return. His first attempt of this methodology, he gave an iPhone app to bestselling author Jon Acuff -- for free.

"It's just like interacting with your neighbor across the street," Bryan told me. "If one day I asked her for an egg, she'd come running. It's basic human behavior. If you give someone something, they'll want to give you something back."

Now, I'm the neighbor here to tell you the other side of the story. I'm here to tell you why his "pitch" was just so engaging and convincing. We can't guarantee every pitch will work, but following Bryan's lead will give you a much better chance of being noticed (in a good way).

How Bryan Hooked Me

This is the email Bryan sent me: 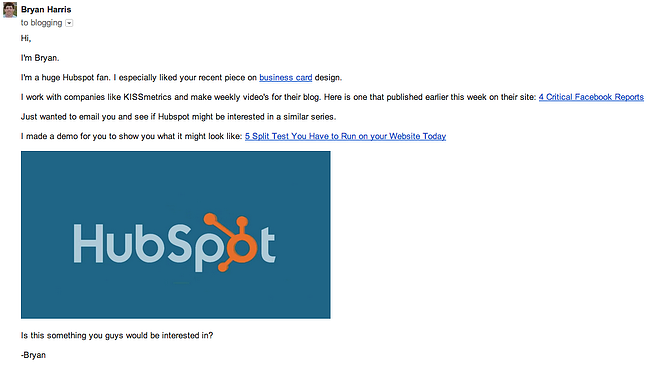 Just a few lines of text. Nothing too apparent from the get-go that would indicate this pitch was amazing and wonderful. But if you look closer, you'll see why it hit the nail on the head. Here's why Bryan's pitch got my attention.

He wasn't a stranger.

Sure, we had never met or talked before, but Bryan wasn't a stranger. He had been reading and interacting with HubSpot content for almost two years. How do I know? I'm a creep, and I looked up his contact record in HubSpot. I could see he wasn't some random stranger out to get backlinks. He knew us as well as anyone can without actually meeting -- and that knowledge transferred into the rest of the following bullet points.

He knew our tone.

Because he wasn't a stranger, he knew how we write on the blog. We're conversational. We're casual. We try to be fun (or at least punny). We're definitely not a buttoned-up jargon factory.

So Bryan mirrored our tone. There's no fluff. No pitch red flags like "keyword rich" or "original content." Nada. Just a normal, conversational tone that makes us know that there's a real human behind the other end of the screen -- not some SEO robot.

He knew our peers.

I'm a big fan of KISSmetrics. I think they have some of the best content on the web for marketers. So the fact that Bryan mentioned them -- and had actually worked with them -- definitely caught my eye.

I don't want you to think that this was the only reason we accepted Bryan. It's not. We've been pitched before by lots of wonderful people who have worked with companies we admire and respect. This was the cherry on top of all of the other reasons we mention in this post -- this reference (and link to his work there) solidified an already-strong feeling I had about him.

He knew our weaknesses.

If you poke around the blog, you'll notice that we don't do a ton of video. We have little bursts here and there, but it's by no means something we do on a regular basis. We're a small team here, so getting dedicated video resources on a consistent basis is difficult.

That's what made Bryan's pitch that much more awesome: His content could fill a need we had. We hadn't come out and said it directly, but by doing his research (which he did), he would know that we would be interested in video content.

He kept it short and direct.

Bryan hooked me in seven sentences. He didn't beat around the bush -- he introduced himself, showed us what he could offer, and asked us if we were interested. This was like a breath of fresh air among the other pitches we've gotten that could masquerade as novels.

From the screenshot above, it's not evident how much work Bryan put into this pitch. Let me fill you in: He created a custom, minute-long sample for us of the type of video he'd create. You can check it out here. That's not easy -- it's not like whipping up 500 words on a topic. You've got to write the script, shoot the video, edit it, and upload it. That's a lot of effort for potentially zero payoff.

But because the topic was spot on and video was very, very well put together, I was sold. He went more than an extra mile -- maybe as far as an extra 5K -- and it paid off.

He asked at the right time.

Being in the right place at the right time isn't something that you can control -- sometimes it's just luck. Bryan had some luck in this equation, too. I had the bandwidth to work with a contributor and my boss was totally on board with the project.

Sometimes when pitching others, you won't be quite as lucky (and I'm sure this has happened to Bryan before). So if it's not a great time at the exact moment you email, but you have the rest of these elements down-pat, chances are the person you're pitching will ask you to follow up with them in the future. I would have done that with Bryan.

So the reason we accepted Bryan's pitch wasn't just because of one detail. All of these little nuanced elements came together at once to be one of the best pitches I've seen, hands down.

Think you can top Bryan's pitch? Feel free to send us one.