Event Swag Your Attendees Will Love ... and Loathe

The main attraction of any live event is (or should be) the content. At HubSpot's INBOUND 2015 event, for example, we had over 100 speakers from marketing, sales, and beyond, designed to attract thousands of attendees.

But sometimes, it's the little things that can make an event go the extra mile: the special surprises the coordinators throw in, the prizes companies hand out, the contests that take place. You know ... the free swag!

So, to help out all the conference coordinators out there, we've collected examples of the best and worst swag we've come across at events. We hope it helps inspire you to create awesome swag bags, and leave behind all the lame trinkets that ultimately end up in the dumpster.

What Does 'Swag' Mean?

"Swag" is a slang term used, for our intents and purposes, to describe the free stuff companies give away as a form of advertising. It's usually branded with the company's name, logo, and/or colors.

So, that company-branded t-shirt you saw someone wearing on the subway? That's an example of swag. Same with those logo stickers you see on people's laptops, and that branded mug on your desk. People can get swag from events and conferences, like we'll talk about here, or through a company's blog or website.

Everyone and their mother is on their phone at conferences -- all the time. Whether they're tweeting, checking their email, or trying to meet up with other attendees, their phone is most likely going to be at 50% battery life by lunchtime.

Give out mobile chargers, and every attendee will love you for it. Oh, and they'll probably learn your name, too. Not only will they be pleasantly surprised when they see such practical and thoughtful swag, but having their phones charged will mean they'll be able to engage even more throughout the conference, which is great for the conference coordinator. Finally, they'll likely use that mobile charger beyond the last day of the conference. In other word, your logo will be exposed to them -- and to others around them -- long after the conference is over. That's a beautiful thing. 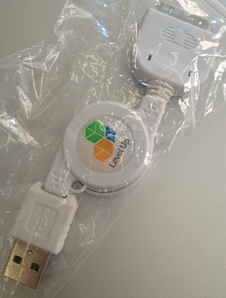 Everyone likes unique gifts in their event swag bags. One way to make your swag bag stand out is by filling it with fun, seasonal items. Most companies don't give out seasonal items because they're looking for gifts that can be used year-round, but that fact alone makes these items even more special.

If you're hosting a summer conference or an event in a beach location, for example, then think about giving out items like beach towels, flip flops, and frisbees. They cater to activities attendees can partake in during the event. Also, let's think even another step ahead: When and where will attendees use your swag items? They'll probably use beach items and outdoor sports paraphernalia in public places where other people might see them and ask, "Where did you get that?" or "What company is that?" The result? Your company's exposure will go far beyond the conference's attendees. 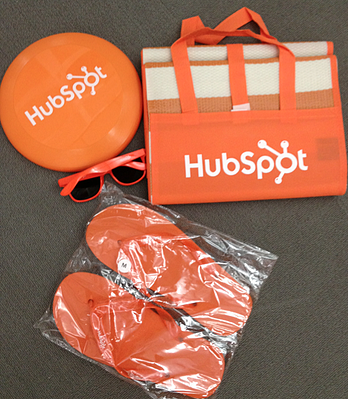 As much as we all wish we could predict the weather (trust us, we're from Boston), we simply can't always foresee the rain. As many of you well know, unexpected rain can be one of the most frustrating annoyances at a conference -- which is where free umbrellas can come in clutch. Not only will it make their experience better, but it'll also create buzz around how well prepared your company was for any given situation. Let's face it, that's just impressive.

The other great thing about umbrellas? You really can't have too many of them. So you can be sure that your swag -- with your logo on it, of course -- will be used and seen long after the event ends. 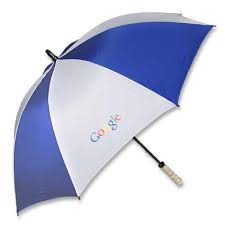 Like umbrellas, I would argue you can never have too many t-shirts, either. (Get back to me around spring cleaning, though. ) If you're giving away t-shirts with cool designs or sayings (as in, not just a t-shirt with your company name or logo on it), then chances are, a lot of people will pick one up -- even if they've never heard of your brand before. Who knows, they might even pick one up for their coworker, too, who would just love a shirt like that. It's something people will wear in many different contexts outside of the event itself. 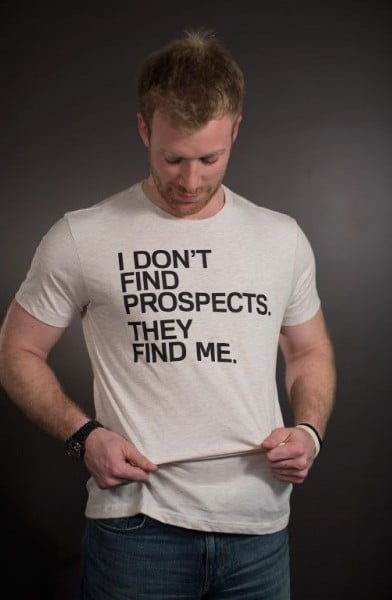 It may sound like a simple idea, but reusable water bottles are some of the most valued swag items given out at conferences. First of all, they're convenient -- and a lot easier to handle than open cups of water that can easily be spilled everywhere. They also encourage attendees to stay hydrated, which can be hard for people to remember when they're rushing from event to event. Finally, reusable water bottles pair well with the recent emphasis on conferences going green.

Not to mention, reusable water bottles are yet another item that can be used long after the conference is over. (Are you seeing a theme here?) HubSpot gave away thousands of reusable bottles at Dreamforce a few years ago, which were soon spotted all over the city.

People always stop to chat if you're giving away food -- after all, people tend to go long periods of time without food at conferences since they're usually scurrying around from place to place. But you're doing it right if the food you're giving away is unique and could be a conversation-starter.

For example, the folks at Digital Talent Agents once gave away Coffee Cereal (coffee-flavored cereal that has caffeine in it), which served as a unique conversation starter for attendees who'd never heard of it before. One year, the New York Post  gave away buckets of gummy bears. As you would imagine, this gift went over really well. (In fact, my coworker still talks about how awesome it was.)

While these won't last as long as other great swag items, they can serve as an interesting way to get people talking about your brand at the conference itself.

While unique swag like frisbees and flip flops can be a lot of fun, don't leave all office-related swag items off the table. Even old-school, paper-related items like moleskin notebooks can be coveted pieces of swag.

After all, in a time when everything is done digitally, moleskines are still one of the most popular items for notetaking. They're also a lot nicer-looking than your classic spiral notebook, making them more of a novelty that many attendees will enjoy using both during and after the event -- an important consideration when you're picking out what to give away. 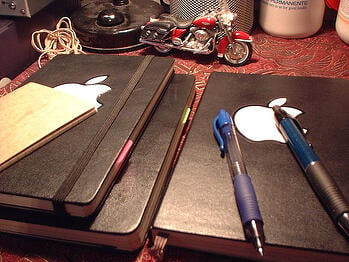 It used to be cool to get a keychain in your swag bag ... until everyone started to give out keychains in their swag bags. It didn't take long to become one of the least effective ways to get attendees to remember your brand.

Some companies have adapted the keychain so that it has other functions, like doubling as a bottle opener or a whistle. But let's face it: People don't really want a keychain with your company's logo on it. It's not that useful, and it's not unique -- there are probably several other vendors who didn't read this blog post and are giving out keychains at the very same conference. Not a great way to stand out.

Sure, everyone can use an extra pen, but I mean ... come on. A pen? Giving out a pen at a conference is the oldest of old school. First of all, we're smack dab in the middle of a this giant mobile movement, meaning people aren't relying on pen and paper as much as they were ten years ago. Additionally, the pens given out at conferences are known to run out of ink pretty quickly and be of very low quality. If you're willing to spend a substantial amount of money on higher quality pens, it may be worth it, but you could also put that money toward a more unique and memorable experience for your attendees with a better swag item.

A few years ago, I would have said this is the perfect item to give out at an event. After all, it's small, it's easy to carry, and you can load it with cool stuff like session presentations. But now that people are storing documents in the cloud, not many people use flash drives anymore. Plus, the reasonable priced ones don't have a lot of storage and can break really easily.

If you want to share digital folders with attendees, it's much more user-friendly nowadays to use programs like Google Drive, Box, or Dropbox. Point being? You may want to rethink your decision before ordering up something people probably won't use.

There are some items that each person only ever needs one of, and they probably have it already. A great example of this is a phone case.

I've seen a number of phone cases given away at conference lately, and yet I've seen no attendees put them on their phones. Why? Because they already have a phone case -- one they've carefully chosen and then paid for.

While something like a phone case that doubles as a cardholder is cool in theory, chances are your attendees won't switch out their own for one with your company's name and logo on it. When you're thinking unique, also think about something people might actually use.

Strictly in practical terms, you could make the argument that backpacks are a great swag item. They're reusable in many different contexts, they can flatten and fold up for the trip home, or they can be used to help carry all the other swag and stuff attendees picked up at the conference, right?

But from a human perspective, you have to admit ... branded backpacks are a little bit nerdy. How many attendees do you think are really going to take home a backpack with your logo on it and wear it around -- especially if they've just having heard of your company for the very first time? Probably not many.

I've seen far too many conference attendees throw free backpack giveaways in the trash ... and that's a big item to throw away. Even tote bags are more reasonable. Think instead of wearable items your attendees might actually wear even if they haven't heard of you, like t-shirts.

Where do I even begin?

Paper weights are the single piece of swag that breaks every rule in the Good Swag Rulebook. (Note: not an actual book. That we know of, at least.) Not only are they dated, but they're heavy and bulky -- two things that traveling conference attendees don't want to deal with while going from session to session and traveling home. When thinking of what conference swag to purchase, pick out something that's light, useful, and easy to travel with.

Speaking of getting swag that's easy to travel with ...

This is a bit of a broad "item," but it's a critical piece to remember when purchasing your swag. A lot of conference attendees travel a long distance to come to the event, and many of them traveled there via airplane and don't have much extra room in their luggage.

Take these people into consideration when picking your event swag. If your swag's too large, like a backpack or a teddy bear, it'll probably get abandoned in a hotel room or thrown out. Remember, the best swag items last beyond the conference -- so make sure your giveaways are a manageable size.

What's the best or worst swag you've seen at a conference? Share with us in the comments.

Editor's Note: This post was originally published in July 2012 and has been updated for freshness, accuracy, and comprehensiveness.

How to Build an Event Website That Drives Registrations