17 Great Conversation Starters to Break the Ice at Networking Events

With fall on its way, the countdown to September's INBOUND 2019 event is in full-swing. Every year, thousands of marketers and their peers gather to learn, inspire, and network. That last one — networking — gets a lot of us pretty excited. After all, it's how 85% of people say they've landed a job. And personally, if I'm really into an event and I'm feeling super energetic, I love to network. But I don't always feel so peppy. Then what? 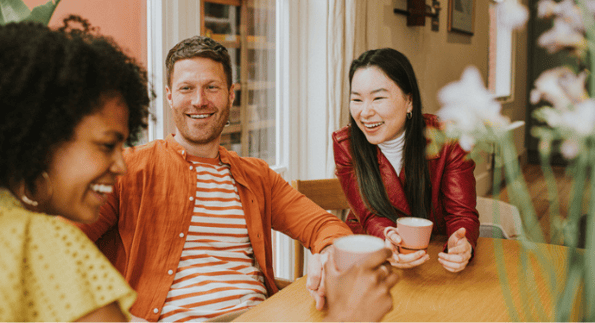 Sometimes, we have to fall back on an arsenal of conversation starters. It helps to spark a discussion, even when it's taking every ounce of willpower you have not to go home, turn on Netflix, and order sushi.

We've got your back. Here are some of the conversation starters that we've tried and have seen succeed. Bookmark them for your next networking event.

17 Great Conversation Starters to Break the Ice at Networking Events

It actually works. Just be sure you have something to follow your introduction, so that you don't end up staring at each other in silence. And as you'll see, that's the key to most conversation starters — be ready with a follow-up. Saying "hi" is just your way to get the ball rolling, so be sure you can keep the exchange going and take it to the next level.

Good news: The answer is almost always "yes." Plus, I don't know about you, but I think we all have war stories of when the internet stopped working for us at the worst time — those are always great conversation starters.

3. "That [food or beverage] looks great. Where did you find it?"

This question can offer a few different answers. The person might just tell you where they got it, or they could go into a description or a comment on the quality. Not sure where to go from there? Tell them about a place where you once had the best version of whatever they're drinking or snacking on. But frame it as a question — "Have you ever been to Hawaii? I once had the best fish tacos there."

This technique also works with neutral compliments, like telling someone that you love their laptop bag or jacket. Most people enjoy receiving positive feedback, and will probably follow up with a story about where or how they got it. (And if they don't follow up, ask them about it — remember, keep the conversation going.)

I always like to leverage the communal confusion that occurs at every event. When you first arrive, no one really knows what they're doing. But anyone who does will jump at the chance to be "in the know."

5. "I can't believe how cold/hot/beautiful it is today."

Talking about the weather sounds so cliché, but it actually works — especially if people are visiting from out of town. Maybe someone from sunny California, for example, is traveling to Boston for INBOUND this year. Of course, that would require you to ask the person where they're from, first. But once you have an answer, you can even make a joke about it — "Boy, I bet you're glad you left Los Angeles behind for a few days of chilly New England weather."

6. "Are you here with colleagues?"

If someone you're speaking with is at the event with a group of people, that can allow your circle to expand — if you're proactive about it. You can tactfully express interest in meeting someone's co-worker by asking what the different roles are on that person's team, and responding with something like, "You know, I've always wanted to learn more about X. Would you mind introducing me to your colleague who works on that?"

But if that person is flying solo, you can generate some empathy as a fellow lone wolf. That doesn't mean you should cling to that person the entire time, but a "me, too" is always nice. Just be sure not to leave it at that — follow up with an idea of where to meet some of your fellow cohorts, like mentioning that there's supposed to be a great breakout session later.

7. "You guys look like you're having the most fun over here. Mind if I join this conversation?"

Of course, you'll probably want to say that to people who actually look like they're having a good time. And really, who's going to say "no" to that? If they do, chances are, you'll want to find another group to hang out with, anyway.

8. "Are you here to see anyone in particular?"

If you're both interested in meeting the same people or seeing the same sessions, this question will help you establish that common ground. Regardless of the answer, you'll learn more about each others' goals and reasons for attending the event, which promotes an exchange of ideas and knowledge. And that can create opportunities, even after the event is over — you never know when that person might need your expertise down the line, or vice-versa.

9. "Did you all come here together, or did you meet here?"

This question is a great one when you've joined a group of strangers. It also opens up the conversation to everyone in the group, instead of limiting it to the people sitting right next to you. And the more people chatting, the better — it's another opportunity for you to learn about everyone's goals and exchange ideas.

If the event is big enough, chances are that you'll have to wait in line for something — a keynote, the restroom, or food, to name a few. And, as the least patient person on the planet, I can attest to the effectiveness of using that time to do something other than focusing on how slowly the line is moving. Put that energy toward something productive, like meeting the people around you.

Being at the same conference, sessions and speakers are guaranteed common ground, so use that to your advantage. It's a great starting point that can go in a lot of different conversational directions — did you see that person speak at a different event? Did you read their work? What did you think of the talk?

12. "Have you ever been to X down the street? I've really wanted to check it out."

This question is a great one when you're attending an out-of-town event. If there's a restaurant there that you've heard good things about, you can ask locals and visitors alike if they want to check it out, too.

And if you're a local yourself, and you're chatting with visitors, you can recommend that they see the place while they're in town. Mention that you haven't been there in a while, or that you'd love to go back. If there's a shared interest in going, you can suggest heading over together or sharing a cab.

But if they're not interested in going to that particular venue, ask them if they can recommend where to go, or if there's another place they wanted to check out. You could suggest heading there together, too, but make sure you're not being too pushy — sometimes, people really just want to take a break to be alone, so don't take it personally.

Be sure to have a quick follow-up if the answer is "no" — like asking if any of that person's colleagues are speaking, or which sessions they plan on attending. Questions like that can prime you to learn more about what the person does, and how you might be able to learn from each other.

But if the answer is yes — jackpot. That's a great opportunity to ask them what they're speaking about, and what made them so interested in the topic. And be sure to mention you're looking forward to attending, and what you hope to learn from it.

And if that person already spoke, but you missed it — "Bummer," you can tell them. Just be sure to ask if there's somewhere you'll be able to watch it online, or when their next speaking engagement is.

If the answer is "yes," use that to make the person feel like an expert, without overwhelming them. Ask them for insider tips on how to make the most of the event, what was different about it last year, and what they're hoping to do this year. That can lay the groundwork for uncovering shared interests.

But first-timers can empathize with you, and you can even ask them some of the same questions, like what made them come to the event in the first place and how they're liking it so far. You're still opening up the conversation to a potential "me, too" moment, and might find an opportunity to participate in a session together.

15. "Did you understand what the speaker meant when she said, 'X'?"

This question creates a great opportunity to start chatting with some of the people who were sitting next to you during a session, instead of silently/awkwardly shuffling out when it's over. If you legitimately didn't understand something, don't be embarrassed — it might have confused other people, too. Brainstorming different interpretations of a talk can actually be kind of fun — it gives you a chance to be creative and possibly share ideas with someone who has a fresh perspective.

And even if that person did understand what was confusing you, asking them to explain it might accomplish a little bit of ego-stroking. But keep the conversation going — especially if you actually want to learn more about what that person has to say.

16. "I'm tired of talking to my colleagues — I see them all the time. What are you guys talking about?"

This one is a spinoff of a pickup line from comedian Pete Holmes' podcast. His original version was, "I'm tired of talking to my friends, what are you guys talking about?"

It's a line that's effective in a number of scenarios, because it's most likely true. It's not that you don't like your colleagues — but as long as you're surrounded by new people, why not gain some of that fresh perspective I mentioned earlier? It shows an interest in getting to know the folks who are there, and sets the tone for you to exchange funny office stories, which is always a great icebreaker with someone unfamiliar.

17. "Alright, I've got an awesome marketing joke for you."

This only works if you actually have an awesome marketing joke. Luckily, my colleague Corey Wainwright wrote a list for you here, so you're all set.

Sometimes, we joke that if all else fails, you can just say to the person standing next to you, "I need a drink!" If it's been a long day, it's likely that the person will agree with you, and might even be interested in joining you. (But please, drink responsibly — all of your great conversation starters will go to waste if you end up overdoing it.)

The point is, as long as you're being appropriate, you can start a conversation about nearly anything. And if it helps to know, I thought I'd mention that my personal favorite icebreaker is the use of those neutral compliments I went over in #3. I figure, if it worked with a celebrity chef I once met at an event, it'll work at INBOUND, right?

We can't wait to see you there—grab your tickets, and be sure to say hi.

Editor's Note: This post was originally published in July 2014 and has been updated for accuracy and comprehensiveness.