If Gen Z Changed the Game for Marketers, What Will Gen Alpha Be Like?

Right now, Gen Z is the main target audience for brands trying to stay relevant and attract new consumers. Gen Z's love for platforms like TikTok and Twitch caused many companies to switch up their marketing tactics —turning to strategies like influencer and social media marketing. However, there's a new generation that is expected to change the marketing landscape even more: Gen Alpha. 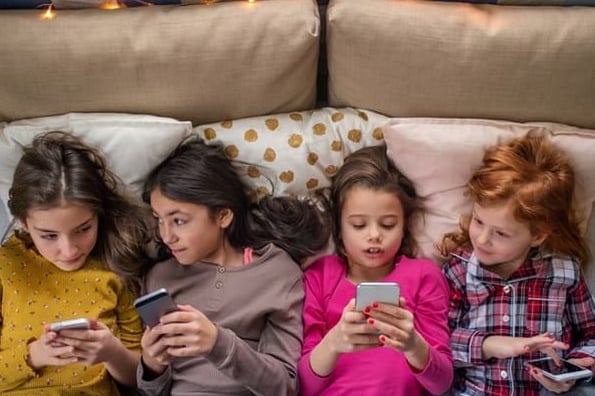 Who is Gen Alpha?

Generation Alpha is the demographic that comes after Generation Z and is made up of anyone born during or after 2010. Right now, Gen Alpha is composed of children under the age of 12, so the oldest in this demographic will become teenagers in 2023. The cut-off year to be considered born into Gen Alpha is 2025.

Gen Alpha kids are also sometimes called "mini millennials" because they are the children of Millennials, are believed to have a really close relationship with their parents, and are likely to have similar consumer habits.

According to Heather Dretsch, assistant professor of marketing at North Carolina State University, Gen Alpha children will likely mimic their parents when it comes to the kinds of products they consume as they get older. That's because millennial parents are extremely conscious of the products they use.

"As health-conscious caretakers, millennial parents seek out a lot of information about the products they buy and expose their kids to," Dretsch said. "From toys and food to clothing and personal care products, they love to be in the know about the best brands for their children, and they choose only the safest, cleanest, highest-quality ones."

Since Millennials are deciding what brands are to be trusted in their homes, Gen Alpha will likely choose those same brands and products for themselves because they'll be all they know. With that in mind, Dretsch says Gen Alpha kids are already aware of cheap knockoffs and competitors — and they already have a strong preference for higher-quality products and industry-leading brands.

Gen Alpha is also more connected than ever due to growing up in the age of social media. In a 2022 survey by market research company GWI, it was found that 38% of children said they spend most of their time on social media after school. GWI said the number increases by 43% on the weekends.

That same survey shows that 43% of children preferred to speak to their friends online over the weekend instead of seeing them in person.

Not only are Gen Alpha kids connected to their peers via social media, they are also socially aware and keep a pulse on global concerns like climate change.

For example, Shopify writer Dayna Winter spoke to three young children and asked them what is the one invention they would create if they could. Ten-year-old Zy said she'd invent a device that would make getting vaccines easier and "less scary." Eleven-year-olds Fia and Mylo both worried about climate change. Fia would invent a machine that picks up trash from the ocean, and Mylo described climate change as a "snowball" that's getting bigger as time passes but is small enough to stop before it's too late.

All three children are part of an online program called Upstander Academy where they learn about social justice and regularly interact with guest speakers that include politicians, activists, and entrepreneurs. The program was started by World-Changing Kids founder Lindsey Barr. Barr, who is also a mother, told Winter she started the program because she noticed children have already developed an interest in social justice.

Gen Alpha's interest in world issues has a lot to do with constantly being in front of a screen and having a lot of access to the internet via tablets and smartphones. That screen time has only increased during the pandemic, which caused children to spend a lot of time at home with their devices.

The way Gen Alpha interacts with the digital world also differs from previous generations. Thanks to platforms like TikTok, YouTube, Minecraft, and Roblox, Gen Alpha children are accustomed to content that gives opportunities to contribute and not just consume.

For example, Fia told Winter she enjoys playing in Roblox Studio because it's where users can learn code and create games for Roblox.

How Future Marketers Can Prepare for Gen Alpha

So what does all of the above information have to do with marketing to Gen Alpha? Well, now we know the following about that demographic:

With that in mind, here's what marketers need to do to reach Gen Alpha:

Be authentic and transparent.

Again, Gen Alpha is incredibly socially aware, which means they are also aware of how certain products, services, and industries have long-term impacts on the environment and society. With that in mind, brands will need to be transparent about their mission, impact, and what they're doing to provide solutions.

Being transparent also means acknowledging the role your company may have played in issues like social justice and climate change — be it good or bad.

For example, let's say your fashion brand has a history of generating large carbon emissions through its manufacturing process. A great way to gain the attention (and trust) of Gen Alpha is through marketing materials proving the company is actively combatting the issue by changing manufacturing practices and partnering with organizations fighting climate change.

This shows honesty and social responsibility, and it provides a solution.

Create experiences and not just products.

Gen Alpha kids are growing up during a huge content creator boom where everyone is given the chance to lend their creativity to platforms like TikTok. Knowing this, it's important that brands and companies figure out ways to give people in this generation opportunities to contribute and not just buy.

One way to do this is to leverage interactive marketing tactics like user-generated content that allow audiences to be a part of the experience. For example, the England-based band Glass Animals has a website that allows fans to create their own art, memes, and music to be used for the band's future projects.

Gen Alpha also loves to learn, especially regarding the latest technology. So if you're a tech-based company or brand, holding interactive workshops that showcase your products' different features can also pique their interest.

Create meaningful content that connects with Gen Alpha wherever they are.

Social media and virtual communities play a huge role in the lives of Gen Alph —, so in the future, brands will need to leverage interactive social media campaigns that meet Gen Alpha where they are. A great example of this is Pringles' #PlayWithPringles campaign.

The campaign was started after the company noticed consumers were already on TikTok making content involving Pringles cans. So Pringles decided to join in the fun by starting its own challenge as a brand campaign. The company partnered with TikTok creators and influencers to challenge users to make creative videos using Pringles cans. After five months, the campaign generated over one billion views and more than 278 million videos.

Gen Alpha is expected to be the most socially aware and digitally savvy generation thus far, so brands will need to be smart about how they connect with them. While there is still so little information about this young generation, the information above can help your brand prepare to delight them in the future.