24 Iconic Santa Claus Advertisements From the Past 100 Years

When you think of Santa Claus, we're willing to bet that words like "jolly," "bearded," and "rosy-cheeked" come to mind. After all, that's the image of Santa many of us -- regardless of age -- have grown to know and love, right?

The mall Santa that our parents forced us to take an annual photo with (despite the trauma it caused). The Santa we watched Tim Allen transform into in the first installment of The Santa Clause trilogy. And the Santa we've seen used in countless holiday advertisements -- from Coca-Cola to Kodak.

Below, we've put together a festive timeline of Santa-inspired print and video ads, dating back to the early 1900s. Check 'em out to see how different companies over the past century have used Santa Claus to sell more products. 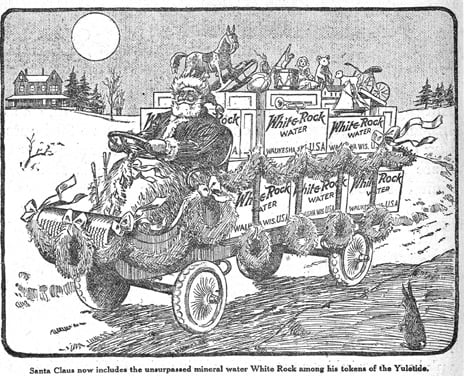 This joyful depiction of Santa Claus carrying a sleigh full of White Rock water and various toys appeared in the 1915 issue of the San Francisco Examiner. 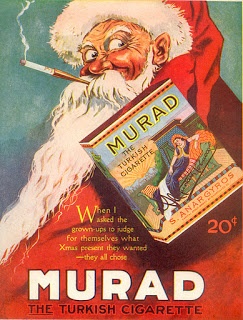 This sinister-looking Santa Claus is shown smoking a cigarette in this vintage advertisement ... but it's not just any cigarette. According to the ad copy, Murad's Turkish Cigarettes are what all the "grown-ups" are choosing for Christmas. 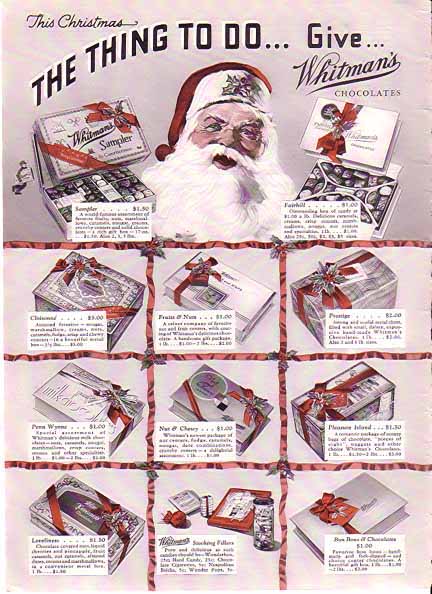 Another classic depiction. This chocolate advertisement shows a simple, familiar Santa -- with a festive piece of holly attached to his otherwise uniform hat. 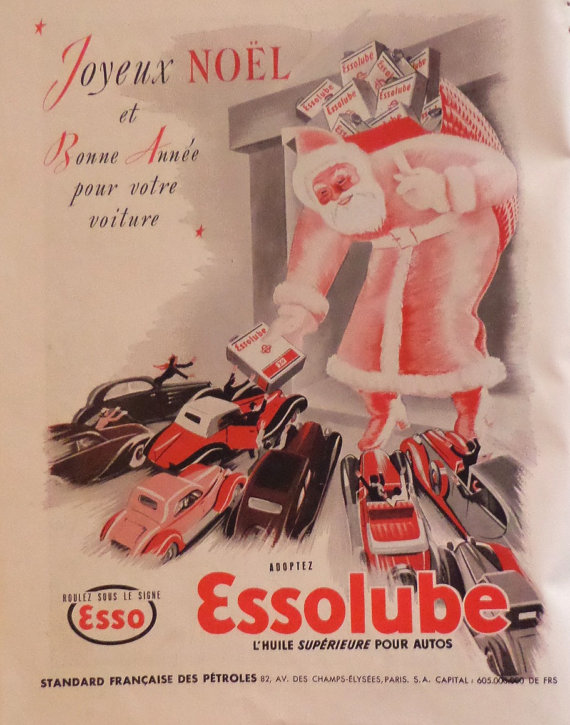 This French motor oil advertisement from Essolube shows Santa Claus delivering a sack of oil to eager automobile owners. The ad copy translates to "Merry Christmas and Happy New Year for Your Car." 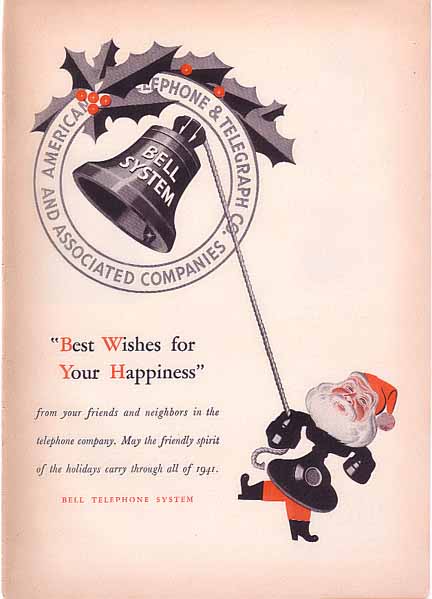 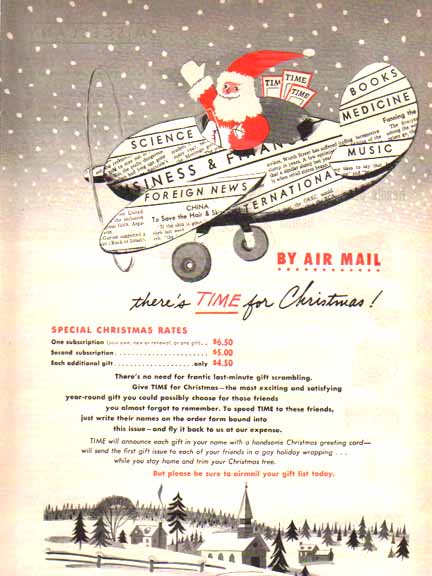 In this late 1940s advertisement, Santa is shown piloting an airplane to deliver magazine subscriptions to all. The plane is embellished with various headlines, and the ad copy highlights their "special Christmas rates." 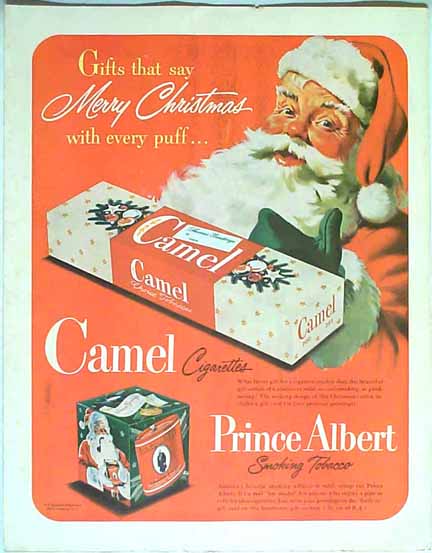 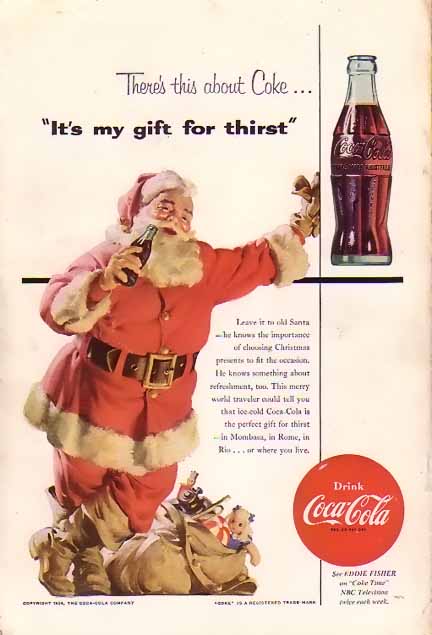 I don't know about you, but I've always loved Coca-Cola's warm, jolly portrayal of Santa Claus. This classic Coca-Cola ad features Santa Claus enjoying a "gift for his thirst" while he takes a break and puts down his sack of toys. 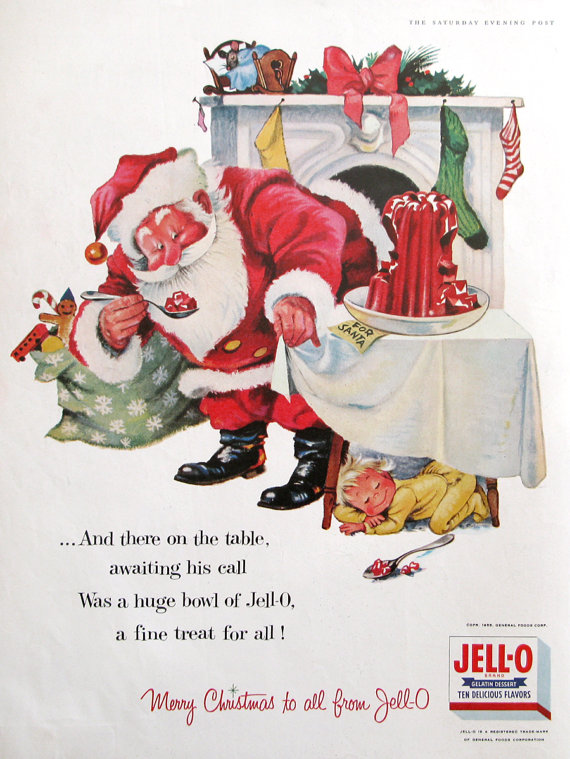 This fun advertisement for Jell-O shows Santa enjoying a few bites of the good stuff left out for him by the soundly sleeping child underneath the table. 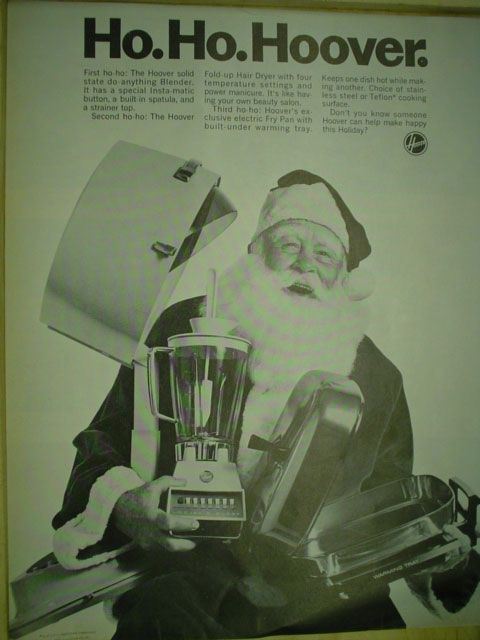 You can almost hear the laughter in this classic, black-and-white display of Santa Claus showing off his Hoover appliances. 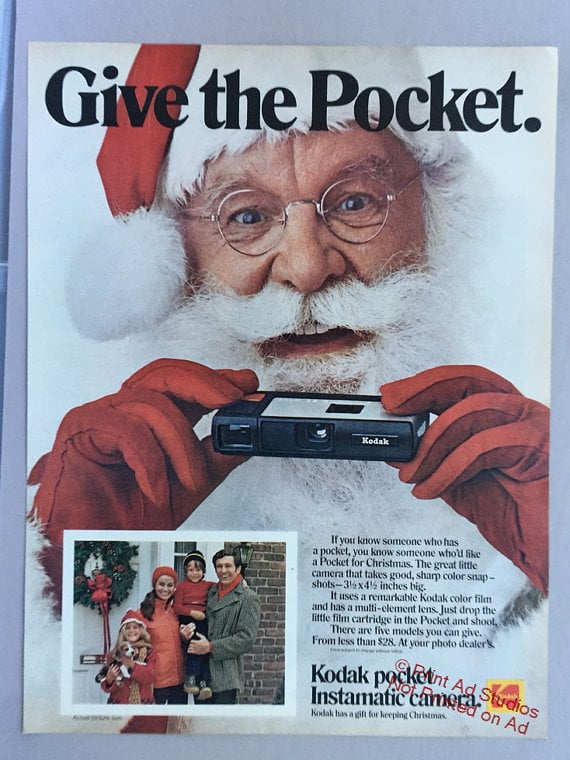 This cheerful advertisement shows Santa Claus gearing up to take a photo using the new Kodak Pocket camera -- the perfect gift for "anyone that has a pocket," according to the ad copy. 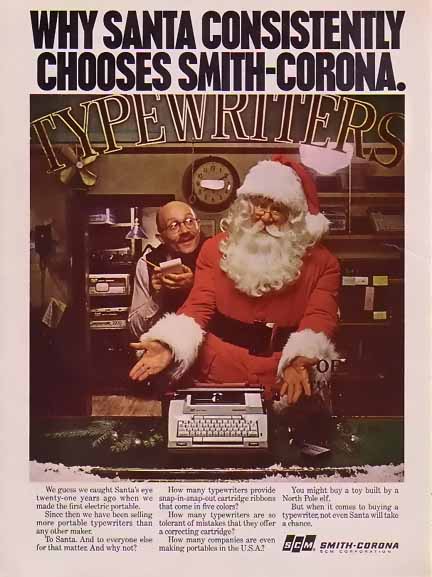 In this late 1970s advertisement, Santa is seen showing off the Smith-Corona typewriter. (The perfect piece of technology for him to make his list -- and check it twice.) 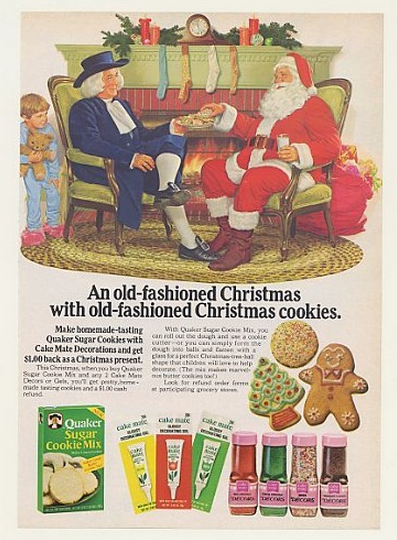 In this 1977 ad for old-fashioned holiday cookies, Santa Claus is shown spending some quality, fireside time with the Quaker Oats man himself. If you look closely, you'll also notice a curious child trying to sneak a peek from behind the chair. 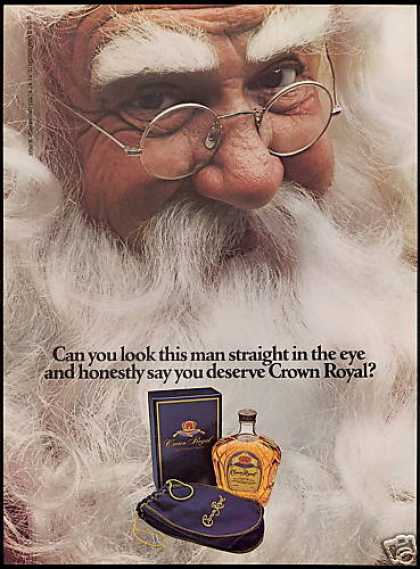 This advertisement challenges viewers to look Santa in the eye and tell him they really deserve Crown Royal this year. It's hard not to smile at the dubious look on Mr. Claus' face.

Santa proves that you can't have cookies without milk in this classic 1993 commercial. 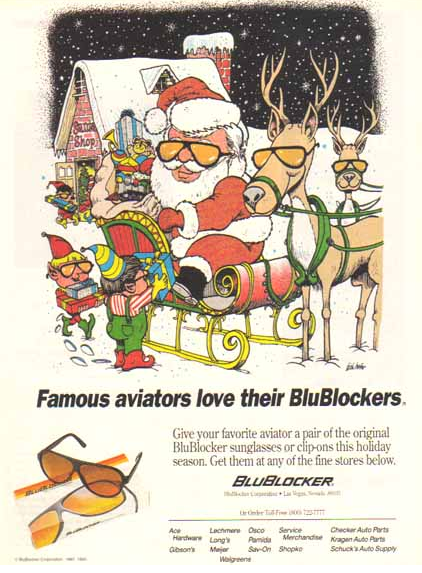 Now here's one we haven't seen before: Santa in sunglasses. This clever advertisement positions Santa's job in a different light -- Old Saint Nick and his reindeers are "famous aviators."

This 90s commercial from M&M is a timeless classic. We love the mutual look of surprise and shock on both Santa and the M&M's faces when they bump into one another late at night. 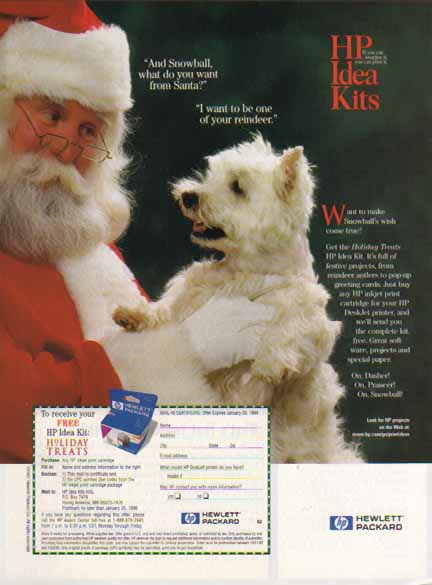 This HP advertisement shows Santa Paws ... I mean Claus posing with a fury friend. Snowball, the featured dog, seems to be eager to join Santa as one of his reindeer. 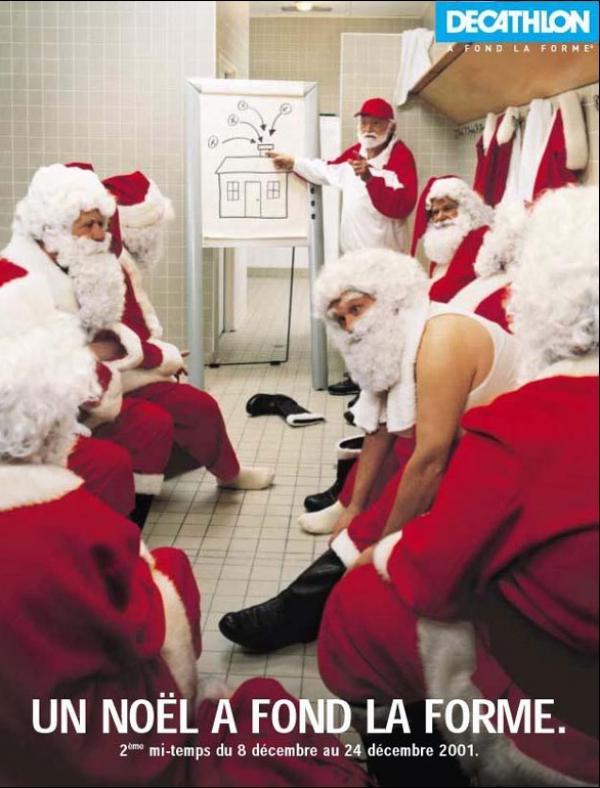 It's hard not to laugh at this crew of Santa Claus staff members getting all suited up in their locker room. The chimney entrance game plan on the board is especially amusing. 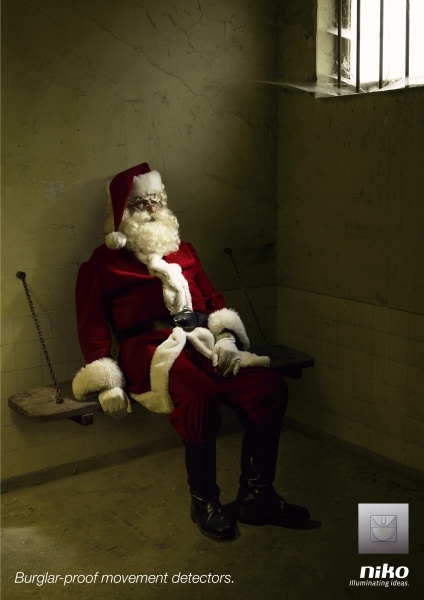 Image Credit: This Is Not Advertising

Santa? A criminal? This advertisement pokes fun at Santa's "breaking and entering" skills while highlighting the security of the company's burglar-proof movement detectors.

This Pepsi commercial pokes fun at Santa Claus' well-known Coca-Cola advertisements by showing him sneaking a Pepsi on vacation in his red and white Hawaiian shirt.

Santa shows off his tech-savvy side as he communicates with Siri in this amusing commercial for the iPhone 4S.

Even when cleverly disguised as a car salesman, it's easy to pick Santa out in a crowd. This ad pokes fun at the interaction this potential car buyer has when he realizes that he just might be buying a car from Santa himself.

This quick-witted Reddi-Wip commercial shows a dad spraying on a whipped cream beard to disguise himself after being caught in the act by his son. Turns out his son is not buying it, as the real Santa Claus is standing right behind him.

What's your favorite advertisement? Share your thoughts in the comments section below.