Nothing boosts your sales team's excitement and energy more quickly and reliably than an incentive. After all, most salespeople are born competitors -- adding a compelling reward to the mix makes them even more enthusiastic. 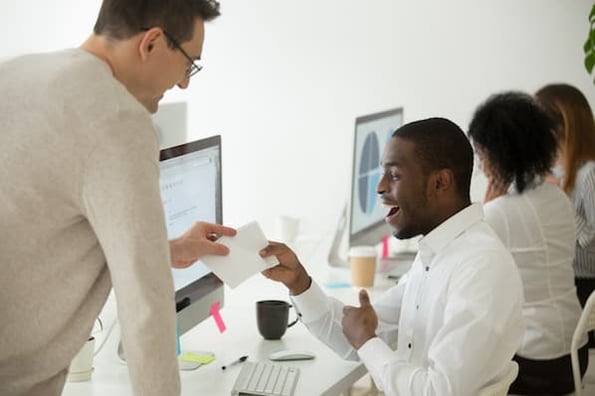 However, motivating your reps isn't as simple as choosing a desired outcome (like more calls or higher conversion rates) and promising a cash prize to the winner. In my years as a sales leader, I've learned the ins and outs of effective motivation. These four strategies will increase the impact of your incentives.

A sales incentive plan is a way to motivate and reward salespeople for reaching and exceeding their sales goals. It's used in addition to a standard compensation plan. Sales incentives can include personal sales performance incentive funds (SPIFs) or non-monetary rewards.

Because motivation is so specific to the individual, I use personal SPIFs in addition to team-wide contests. Let's say I notice one of my reps seems disengaged. They're still hitting their quota, but their body language and tone-of-voice suggest they're not as enthusiastic as they used to be.

Rather than trying to figure out what they'd like -- and potentially choosing the wrong thing -- I'll ask, "How can I motivate you?"

Maybe they say they'd like tickets to a specific music show. Then I'd say, "Okay, what do you have to do to get those?"

The rep will name a goal. Typically, this target will be equally (if not more) ambitious than the one I would have picked. Salespeople always feel honored by the responsibility you're giving them in choosing their own objective and reward, so they don't want to let you down by picking a slam-dunk.

Lastly, I'll ask the salesperson to set a deadline and send me an email detailing our agreement.

Because they chose a prize they truly want, they're highly incentivized to both work toward that goal and keep track of their progress. I don't have to do anything.

Of course, sales managers can't show favoritism. If you give one salesperson a personal SPIF, you may have to do it for everyone.

You should also double-check there's enough budget before you agree to anything. Nothing will destroy a rep's faith in you faster than a broken promise.

I usually try to avoid purely monetary prizes. To understand why, let's suppose you give the winner of your first sales contest a $500 check. They deposit the check, maybe buys a nice dinner or a new shirt -- but the glow of winning fades relatively quickly.

Now imagine you give the winner of your second contest a flat screen TV. Every time they have people over, they'll say, "Sweet TV -- where'd you get that?"

I know first-hand the effect of a physical prize. In 1983, I won a table in a sales contest that I still have. Visitors ask me questions about it to this day.

My salespeople have won everything from slippers to treadmill desks. As long as the reward is personal and memorable, it'll be motivating.

3. Make Sure Everyone Has a Chance

Your team will quickly become frustrated if the same person wins your contests over and over again. There are a few ways to prevent this from happening.

First, you can exclude the salesperson in question from the competition. Maybe a salesperson dominates every single prospecting-related contest. Tell them they're not eligible for those anymore -- and make it up by placing them in a different bucket or giving her a separate contest.

It can also be helpful to create different "classes" of participants, so your top, middle, and lowest performers compete against their peers rather than everyone on their team. This strategy helps drive enthusiasm among reps who normally wouldn't stand a chance of winning.

Some sales leaders use head-to-head match-ups. Let's say you just started offering a new add-on service. You could hold Jeopardy-style quizzes between reps to test their knowledge of the service. The winner of the round scores a point for their team; at the end of the month, the team with the most points gets a prize.

Alternatively, switch up the rules and design of your contest so you're not rewarding the same skills or behaviors every time. If the last contest you ran rewarded the salesperson who sold the most of a specific product, maybe the next one goes to the rep who increases their demo-to-close rate by the greatest percentage.

I've found some salespeople are turned off by public recognition. They're embarrassed rather than proud when you stand up in front of everyone and say, "Matthew got more referrals this quarter than anyone else."

Unsurprisingly, you don't want to make your reps uncomfortable. It's a good idea to identify each salesperson's preferences when you start working with them. (Although it's never too late, so don't give yourself a free pass if you've managed a rep for a year and have never asked how they like receiving praise.)

Here are a few questions you can use during a one-on-one or coaching session:

Motivation is an art, not a science. Although these strategies have been proven to be successful, it's worth experimenting to find the optimal sales incentives program for your team, objectives, and culture.

To learn more, check out these elements of an effective sales contest next.