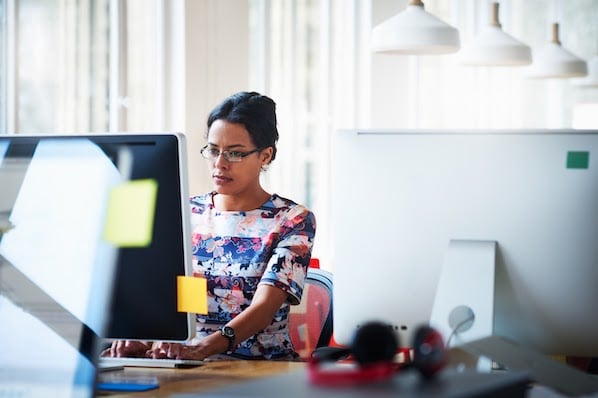 During your search for WordPress tools, you might have come across nulled WordPress themes and plugins. Finding them is as easy as searching on Google and downloading one from a third-party website. You’ll soon have a free theme/plugin to upload to your site.

If this seems too good to be true, that’s because it is. They may save you a quick buck in the short term, but nulled WordPress themes and plugins aren’t worth the extra liability you take on by using them.

In this post, we’ll explain everything marketers and website admins should know about nulled WordPress products: what they are, whether or not they’re legal, and why you should steer clear regardless.

What are nulled WordPress themes and plugins?

Nulled WordPress themes and plugins are copies of premium WordPress products that have been modified and made available for free or at a reduced cost. These nulled products are distributed by websites unrelated to the original developers.

The WordPress CMS may be free to download, but its users know that you can’t serve a quality website to visitors without paying at least a little. On top of web hosting, there are security and performance enhancements, plus premium WordPress themes and plugins that can help bring your site to life.

Because it can cost quite a bit to set up a high-performing WordPress website, some WordPress developers use nulled versions of these same tools. While cheaper than the official premium versions, nulled themes and plugins pose significant risks to security, SEO, and overall website health.

Here’s one example of a nulled version of Divi, a popular WordPress theme and website builder: 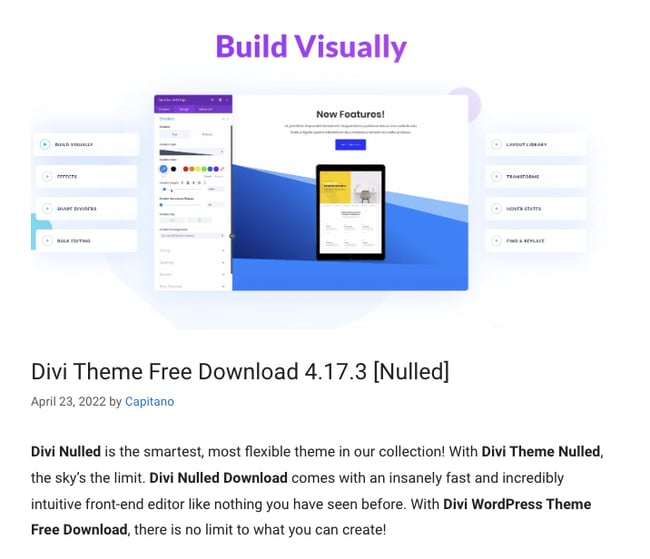 As you can see, it doesn’t look even remotely official. The website copy is spammy and poorly written, and the download link leads to an external URL, where you still have to pay to download the nulled product — so you’re not even getting it for free.

In other instances of pirated software, yes, nulled WordPress tools would probably be illegal.

However, there’s a caveat with WordPress themes and plugins. Premium WordPress products are often licensed under the GPL (General Public License). In very simple terms, this license allows for free and unrestricted distribution of the software it covers.

Themes and plugins publish under GPL because the WordPress CMS itself uses this license, and because it’s a requirement for being featured in the WordPress marketplace.

Unfortunately, a drawback of GPL is that it allows anyone to alter and distribute the software it covers. Any developer has permission to obtain a premium version of a product, modify its code however they please, and release it to the public as their own.

As long as all copyrighted material is removed, nulled WordPress products are, generally speaking, legal.

If they’re technically legal, can I still use them?

Nulled themes and plugins hurt WordPress sites more than they help them. They often feature old code and can quickly become incompatible with the latest version of WordPress. That means that every time WordPress rolls out an update, you’ll have to uninstall the nulled version and re-install a new one.

It’s a ton of work — and it’s also plain unethical.

Next, we’ll discuss why you should avoid these products in favor of their official versions.

Why You Shouldn’t Use Nulled Themes and Plugins

It can cost a lot to build and manage a website, so you might be tempted to seek out cheap solutions wherever possible. The problem with nulled WordPress products is that what you save in money, you eventually lose in quality (and, potentially, money). Here are the ways that nulled themes and plugins harm your website:

1. Nulled themes and plugins are a security risk.

If you remember one thing from this article, it should be this: Nulled WordPress themes and plugins can greatly compromise the security of your website.

This is such a threat that some developers warn against downloading nulled versions of their products, like WPForms did below:

As mentioned, developers are allowed to do whatever they want with a nulled product, and this often means inserting malicious code — spammy links, redirects to dubious websites, a backdoor that grants unauthorized access to your data, or malware that could steal confidential information or even crash your entire site. The possibilities are virtually endless, and not in a good way.

Plus, good luck finding these issues yourself if you opt for a nulled product. While malware scans can detect some harmful code, there’s always a chance you’ll miss something crucial among the files. Hackers know how to disguise malware in such a way that it likely won’t be detected, and you may not realize the damage until it’s too late.

For this reason alone, nulled WordPress software is not worth the risk. You’re much better off purchasing the legitimate version to protect yourself, your visitors, and your reputation.

Any WordPress user knows that updates are a part of life. Plugin and theme developers frequently release updates to patch software bugs, address security vulnerabilities, and introduce new features. If you acquire a nulled version of a plugin or theme, you simply won’t get these updates.

This is critical because most developers release updates at least once a month. Elementor’s changelog can give you a good idea of how often these tools are updated:

Outdated WordPress software is not ideal, for a few reasons. First, you’re missing out on features that can improve your site’s user experience and performance. Once you download a nulled product, you’re stuck with the current features.

Second, outdated themes and plugins are a very common WordPress security hazard. As developers find and fix vulnerabilities, they record these issues in public changelogs, like Elementor’s above. A bad actor can reference these logs and target websites using outdated software, potentially yours.

Nulled themes and plugins may be able to replicate the functionality of the original software, but they’ll never offer the same level of support as an official license. There’s no incentive for nulled developers to help you, since you’re getting the software at little to no cost. On the other hand, official developers devote significant time and resources to offering product support, or at least thorough documentation.

This means that any issues you encounter in a nulled product, from technical questions to glitches, are yours to handle. You might find some helpful resources online, but a dedicated support team can have your problems fixed in much less time.

You could spend months building your authority in search engines, only to have it tanked by a single nulled plugin or theme. This is because these plugins and themes often contain spam links and covert outbound links to malicious websites.

Even if you don’t notice these links sprinkled throughout your site, Google’s site crawlers will record these and factor them into your site’s ranking — it might even remove your site from the index completely if you link to known harmful websites.

As if malware and spam weren’t enough, nulled products may also place undesired advertising in the form of display ads and pop-ups. You have no say in what ads show up, so they could be for anything the developers want.

Unless you search for and try to remove these ads, you probably won’t notice them until your visitors do. It’s not a good look, not to mention how advertisements can impact page load time.

Nulled themes and plugins not only hurt your WordPress site — they also hurt the WordPress developer community. A nulled copy of a paid WordPress product means money taken from those who create and maintain the plugin. Theme and plugin creators often lack the time and resources to make up for lost income, so nulled themes can run these developers out of business.

They’re not Google or Adobe or large businesses with expansive resources. They’re individuals just like you and me. 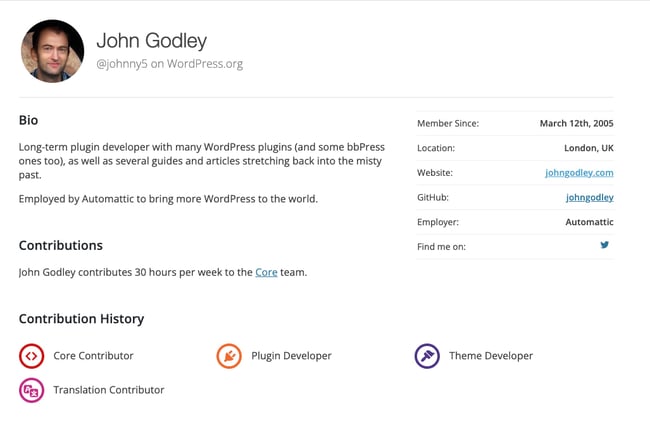 While this may not be a compelling reason for some — software is pirated all the time, so what’s the big deal? — know that WordPress is maintained on open-source principles, and developers rely on WordPress users to invest in quality products. For the WordPress ecosystem to grow and improve, developers must be compensated for their work. 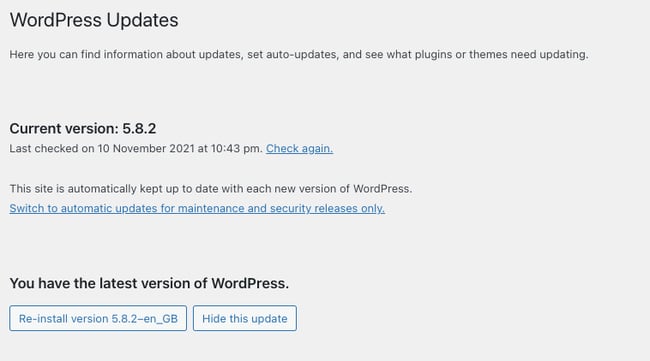 Because they don’t receive any updates, nulled plugins and themes have a tendency to grow outdated quickly. Even if you download the most recent nulled version, it will likely become outdated the moment the developer rolls out new changes.

Developers update their products as WordPress core itself updates, and outdated themes and plugins may not be compatible with the current version of WordPress. This incompatibility can break your website and leave a negative impression on visitors.

Plus, without updates, your site will underperform. You could continually reinstall the nulled software every time an update comes out. But at that point, is it really worth it? You’ll lose all your data and settings, so you’ll essentially have to start from zero.

We’ve established that you won’t be able to get support from the developer for your nulled software. Will you be able to troubleshoot issues yourself and make the nulled software work in case of failure? The answer is most likely no.

You could try to troubleshoot within your WordPress admin dashboard, but if you’re running into pervasive issues, you’ll most likely have to edit the plugin’s or theme’s code instead.

That’s simply not possible unless you have advanced coding knowledge. Here’s a code snippet of a language translation plugin, straight from the developer himself:

Unless you’re a WordPress developer who’s skilled in various coding languages, and who knows the exact architecture of the product you’re trying to troubleshoot, you won’t be able to go in and fix whatever is failing on the back-end. Checking out the changelog and then trying to make those changes yourself won’t work, either.

You could re-upload the newest nulled version, but you’ll lose any of your previous settings.

In addition, the bug you’re trying to troubleshoot can get in the way of your other tools and cause usability problems on both the front-end and backend. It’s best to stick with the official version, as developers always strive to resolve bugs quickly. If they don’t, you have the option of reaching out to the support team.

We’ve made it clear that nulled plugins and themes are a no-go. So what can you use instead?

What to Use Instead: Free Themes and Plugins

Nulled WordPress themes and plugins aren’t worth it. However, this doesn’t solve what’s likely your main issue: Where can I find legitimate WordPress software to improve my website if I’m on a budget?

WordPress is all about making websites possible for anyone, so there are tons of free options available if you know where to look. You can find free themes and plugins using any of the following resources:

Want a quality site? Don’t use the nulled software.

Yes, we might sound a bit heavy-handed with this advice, and we also know it’s tempting to download a nulled product instead of paying full price. The thing is, this route actually isn’t better in the long run — you’ll miss updates, new features, and support, all while putting your security and user experience at risk.

With the right free resources and a bit of elbow grease, you can build an exceptional website for low cost, then upgrade to premium features when you have more cash on hand.

Editor's note: This post was originally published in April 2021 and has been updated for comprehensiveness.

How to Find Out What WordPress Theme a Site is Using

The 24 Best WordPress Sports Themes for 2022