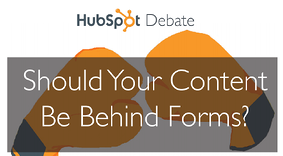 David Meerman Scott, traditionally an opponent of content gates, recognizes that in some cases, forms can make sense for a website. In this episode of the Weekly Marketing Cast , we discuss in exactly which instances forms should be used.

“I think almost always putting a gate in front of your content is not a good idea,” says David. “However, there are times when a form does make sense,” he adds. For instance, one is when you include a secondary call-to-action within your initial offer.

Let’s say you write an ebook, and in it you mention a sales consultation about your product or service. This mention should be accompanied with a link that takes the visitor to a form on a landing page . In that way, you know your leads are going to be educated and more qualified for your company.

Another benefit of having a form is to help you identify which of your existing contacts are more sales-ready. For example, when you send content behind a form to your email list, you can find out which people are most interested in what you have to offer.

While most of the time you don’t want to have gates in front of your content, David says, there are a couple of times when you do want them. Do you agree?