11 Guaranteed Ways to Get Others to Retweet Your Content

After creating content -- whether it's a blog post, an ebook, a webinar, or a video -- it's important to promote that content through social media channels. And when you do promote that content in social media, you cross your fingers that it generates a ton of shares, tweets, and interaction. For the sake of Twitter, if you follow a few simple best practices, more people are likely to retweet and spread the distribution of your content, giving it a much broader reach and a better opportunity to get found by a new audience of prospective customers beyond your direct followers. Marketers should know how to retweet the right way, but it's also critical for them to learn how to get others to retweet their content, too.

1. Discuss Current Events: According to HubSpot's "Science of Retweets" research, nearly 80% of retweeted content is about news, and more than 50% of retweeted content is entertainment-related. More than ever before, people look to Twitter to discover breaking news. News of some of the biggest stories of the last decade, including Osama bin Laden's death, Michael Jackson's death, and the unexpected earthquakes during the summer of 2011, have broken on Twitter. Instead of checking the news, it is common practice for people to first check Twitter. Being one of the first people to cover breaking news related to your industry is a great way to get others to retweets your content and expand your reach.

2. Don't Be Overly Self-Promotional: Inbound marketing teaches us marketers to become thought leaders in our industries instead of simply promoting our company's products and services. Encouraging others to retweet your content should follow the same philosophy. Your content is less likely to be retweeted if it is centered around your products and services. When tweeting, keep in mind the information your target audience craves and the problems they need to solve, and tweet that type of content most. Track which types of tweets are getting retweeted more than others, and tweet the types of content that tends to be more popular with your target audience.

3. Include Links to Your Website: After all, why else would you be tweeting? Granted, a lot of chatter on Twitter is engaging with other people, but spreading links back to your website and blog content should be your primary focus. According to our "Science of Retweets" data, more than 50% of retweets include links. Your goal should be to get as many people to retweet your content as possible so that more than just your immediate Twitter followers will see your blog posts, ebooks, and other content. Think about it: if you have 1,000 followers, and one person retweets your content to his or her 1,000 followers, you have immediately reached more people than your original tweet did.

4. Understand Your Audience: Twitter fosters a learning environment. People follow others who they feel are thought leaders in their industry. They want to learn more, have access to more content, and reach people they might not have otherwise been in contact with. "Science of Retweets" research indicates that tweets with readability levels greater than grade 6 are more likely to be retweeted. Your followers want content that is credible, intelligent, and valuable, so tweet using words that don't dip below 6th grade reading levels. 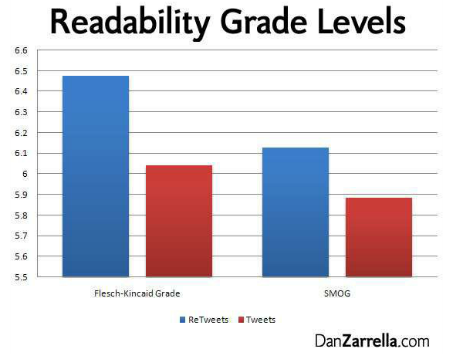 5. Retweet Others: Retweeting is similar to the concept, "You scratch my back, and I'll scratch yours." If you retweet someone else's content, your Twitter username may stand out to that person among all the clutter on Twitter. Retweets can result from the quality of your content, but they can also occur from the relationships you build with your followers.

6. Ask Others to Retweet You: If you have something valuable to share, you probably want as many people as possible to spread that content or message, and simply asking others to retweet that content can be an effective way to generate more retweets from other Twitter users. In fact, according to HubSpot's "Science of Social Media" research, using the words "Please ReTweet" in your tweets will generate 4x more retweets. So don't be afraid to encourage others to share your content if they find it valuable, too.

7. Consider the Timing of Your Tweets: When sending out tweets, timing does matter. If it's too early in the day, there won't be as many people on Twitter who will retweet your content. According to HubSpot's "Science of Timing" data, late in the day and week are the most retweetable time periods. If you have an important tweet to share and you want to maximize retweets, be sure to take into account the timing of your tweet in order to reach as many people as possible.

8. Direct Tweets at Influencers: If you've created content about Twitter, why not tweet it a Twitter expert like @Pistachio? If you've created content about social media marketing data, why not tweet it Social Media Scientist @DanZarrella? Direct your tweets at Twitter users who are already thought leaders and experts in your industry, as these people are likely to have lots of followers. If they think your content is valuable and retweet it, you will reach many more followers -- their followers -- and these followers might value the opinion of that thought leader and retweet it, too! Influencers have high following counts on Twitter because of their knowledge on particular subjects. Getting them involved in your conversation is bound to be beneficial.

9. Make Your Tweets Brief: When people retweet the right way, they usually like to add a comment to or offer their opinion of the original tweet. Remember, the length of a tweet cannot exceed 140 characters. Not allowing room in your tweets for people to add "RT @HubSpot" plus their comment, will discourage people from retweeting your tweets. The easier you make it for other people to retweet your content, the more likely they will retweet it. Below is an example of the @HubSpot account retweeting Guy Kawasaki and adding our own commentary.

11. Use Hashtags: Include hashtags in your tweets. If someone isn't following you but is searching the hashtag, they will still see your tweet and potentially retweet your content. This can be especially worthwhile if you're hosting a live, in-person or online event, as people who are tweeting and following the event's hashtag will constantly retweet others' content. This will not only get you more retweets, but it will also help you make new connections.

As marketers, we want to reach as many people as possible, and social media is a great tool for achieving this goal. Using Twitter strategically is a smart way to reach your customers and prospects, and retweeting can be the key to reaching new audiences and showing others that you are a thought leader in your industry.

What do you do to get others to retweet your content?

ReTweet This to Win Apple iPad: 7 Tips to Get More ReTweets

We all know content that spreads helps attract more people to your business, and a major way that content spreads on Twitter is through ReTweets (learn more about ReTweets on this free webinar).  Here are a number of things you can do to ha...

ReTweet This to Win Apple iPad: 7 Tips to Get More ReTweets

We all know content that spreads helps attract more people to your business, and a major way that content spreads on Twitter is through ReTweets (learn more about ReTweets on this free webinar).  Here are a number of things you can do to ha...