How the Third Wave of Media Is Transforming Marketing Content 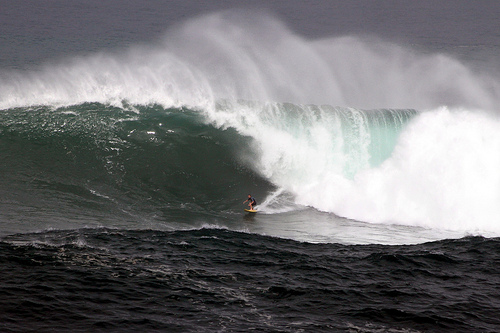 As a society, how we watch, read, and consume information is fundamentally changing. News, information, and entertainment will never go back to "the way it was," and this change will have a powerful impact on all aspects of inbound and outbound marketing. In 2012, marketing is publishing, so let's learn how to be a great publisher in an industry under constant disruption.

This week, some of the most intense shots yet were fired in the battle for the eyes and mind of the world. Stop. Listen for a second. Do you hear the cries and confusion? Those are the cries of the publishing and broadcast executives.

As a marketer, you should be cheering.

Brick and mortar bookseller Barnes and Noble announced this week that it would no longer stock books published by the digital book juggernaut, Amazon.com. "What's that?" you ask? "Amazon publishes books? But I thought they only sold them." That's right -- Amazon is a book distributor AND publisher.

In the fourth quarter of 2011, Amazon said it sold millions of Kindle electronic reading devices, but the business still came in a billion dollars in revenue below Wall Street expectations.

As reported by the New York Times, Amazon published 122 books in the fall of 2011. This number is seemingly insignificant when compared to the total number of books published by all publishers during the same time period. But what doesn't matter, because a secret about the publishing industry is that it makes most of its money from a small group of best-selling books and authors. Amazon understands this and seems willing to lose money in order to take the best and brightest writers away from traditional publishing houses. And with more than $6 billion in the bank, it can.

Barnes and Noble, citing the lack of ability to sell ebooks from Amazon's published works, has decided to return the favor by not selling the print versions of those Amazon-published books in its stores. This marks a continued battle for control over distributing the words of the world.

The Third Wave of Media

Salar Kamangar, CEO of YouTube, believes that we are in a third wave of media. At an event in California this week Kamangar said, “The first wave was the broadcast networks. The second wave was cable networks. Now, it’s about giving people exactly what they want to watch today.”

Mashable reports that YouTube has invested more than $100 million into premium content channels around niche topics including food, fashion, pets, and fitness, making it clear that YouTube is willing to spend money to be a major player in this third wave of media. This week, YouTube hired Bruce Seidel, who oversaw shows on the Food Network and Cooking Channel, to lead programming for YouTube's new food-focused channel. According to a New York Times article, Seidel hopes to “discover new stars and galvanize the niches that are driving the internet food conversation.”

User Experience and the Third Wave of Media

Since the early beginning of the internet, pundits have discussed the rise of internet-based entertainment, but the fact of the matter is that online video has never really made it into the living room. One core barrier that is too frequently ignored is the user experience of watching online video compared to watching television. People watch television to relax, and having to click a new video to watch on YouTube every three minutes is not relaxing. Plus, you have the added anxiety that, for many people, the computer equals a device, and devices subsequently mean stress.

It is the deficiency of user experience that third wave media companies have to overcome in order to infiltrate the living room. But Kamangar, who plans to launch 100 niche content channels on YouTube this year, says, "The idea is that you’ll subscribe to a channel, and you’ll go and just keep watching.”

The knock against many ebooks and online video shows is quality. The fact of the matter is that because anyone with a computer or video camera can create an ebook or online show, the quality and production value in many cases is much lower than that of traditional publishing houses and cable networks. That's why Amazon is signing top-quality authors and YouTube is hiring some of the best minds in cable programming. Both of these companies understand that, to take over the living room, the core content has to be remarkable.

The idea of remarkable content isn't anything new. However, content has the potential to become even more remarkable when it is applied to a niche. And that niche factor is the leverage third wave media companies have over the first and second wave media companies. Imagine if 100 new cable networks launched this year to cover niche topics. It simply wouldn't happen. Online video providers and ebook authors' best shot at disruption comes from a laser focus on increasing content quality standards while still serving and representing niche communities currently underserved by cable networks.

Change Is Hard: AKA Why This Hasn't Already Happened

The fact that the world is constantly changing isn't news to any of us. We write it off as a fact of life. Despite this constant change, we are at a paradox. Change is easy to hate, especially major disruption to our daily routines and habits. And it's not that we as people or as a society don't want to change. It's the simple fact that change is exhausting.

Chip and Dan Heath explain this idea perfectly in their book, Switch. The Heath brothers write: "Change is hard because people wear themselves out. And that’s the second surprise about change: What looks like laziness is often exhaustion."

The way we read, watch, and consume information is changing at the pace of a rapid turtle. This means that you won't blink and suddenly live in a world where no publishers exist, but every couple of months, a stack of small changes starts to become noticeable, and the media world becomes slightly different. Before you know it, a few years have passed, and the media world is completely different.

Marketing in a Transitional Media World

It's time to find your niche. The way information is distributed is gradually yet radically changing around us, which means you can't wake up years from now and decide that it's time to change. It'd be too late. Instead, you need to take action now to be an active part of this transitional media world.

Start executing on these four action items today to not only survive, but also succeed in the next generation of media.

1. Find Your Niche - Your niche isn't the product you sell. Rather, your niche is the subject matter that is of greatest interest to your prospective customers. If you sell supplies to auto body shop owners, then your niche is content about operating a successful auto body shop in every facet of the business, even those for which you don't have products to sell.

2. Balance Quality and Velocity of Content - The challenge of content in the online media landscape is that content has to be high quality enough to stand out, but also be agile enough not to be out of date the moment it's published. The only real way to know what a good quality/velocity balance is for your business is to test different options to understand what works the best for your niche. You can do this by changing the frequency in which you publish blog posts and other content. Do you get more leads and engagement when publish a blog post every day, or once a week? Do blog posts that you spend more time polishing and improving generate more traffic and leads than other posts? These are the elements to test as part of your marketing content.

3. Have a Personality - Don't be bland. Look at the text or videos that capture your attention. They probably have a clear point of view and an interesting tone. Don't be afraid to be fun, sarcastic, edgy, or any other tone that aligns with your brand and products.

4. Start Planning Beyond the Desktop Computer Screen - For most of us, we still think of a computer as the device that sits on our desk with a big screen that isn't touch-sensitive. But from the Kindle, Nook, and iPads to iPhone and Andriod smartphones, the definition of a computer has changed. Yes, these changing devices will impact your marketing content. And it isn't just about their size, but it's also that they all have one key element in common: touch. Start thinking about what your content looks like in a world without mice (the computer kind). It will have a huge impact on how we design our content and collect information from our leads.

Success of digital-only magazines like the Daily demonstrate that consumers are willing to not only consume but also pay for touchable content that is personalized for their devices. Survey your target audience, and understand what devices they are using to consume information. Then make sure your content works well on the most popular devices.