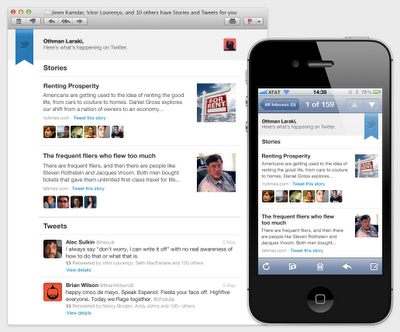 Looks like Twitter is putting its January acquisition of social news startup Summify to good use! Yesterday, the official Twitter blog announced that it will start sending users a weekly email digest featuring relevant tweets and stories shared by the people they're connected with on Twitter. This just several days after news of Twitter's "acqui-hire" of personalized email marketing service RestEngine.

Similar to the updated design of the Twitter Discover tab we covered earlier this month, the summary highlights which of the users you're connected to on Twitter shared the featured stories and allows you to click through to see their tweets. It also enables you to click the headlines to read the stories themselves, and gives you the opportunity to tweet your thoughts on individual stories via the links in the email.

In addition, the digest features the most engaging tweets of the week that were seen by the people you follow, regardless of whether you follow the users who posted the tweets. Featured tweets are also accompanied by a list of users from your network who retweeted or favorited those tweets, and you can click the “View details” link in order to retweet, favorite, reply, or see the conversation about them. 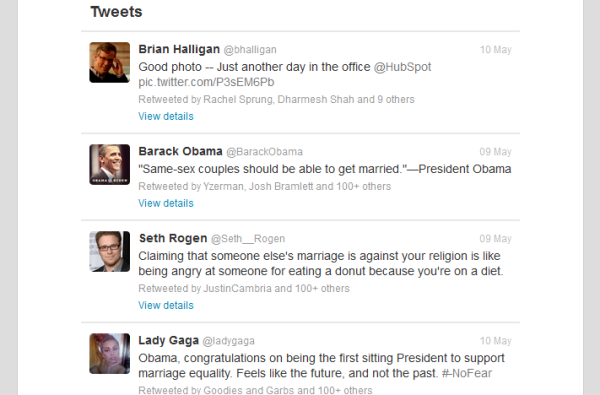 Twitter indicates it will be rolling out the digest to all users over the next few weeks, and you'll know the email when you see it. Of course, you can always opt out of receiving these emails via your Twitter Notification Settings.

As Twitter mentioned in its announcement of the updated Discover tab, the microblogging site is making an ongoing effort to bring users closer to the content and tweets they care about, making content discovery on Twitter even easier. And the new email digest is obviously a part of this effort.

From a marketer's perspective, this is yet another win in marketers' attempts to surface their best content to Twitter users. In a Twitterverse where the half-life of a link is less than 3 hours, marketers know how easy it is for their tweets to get buried under the frequently updated Twitter streams of their followers. But with discovery engines like this, marketers' content has more opportunities to get in front of users, which means a greater chance of visibility for brands with a Twitter presence. This also makes it even more important for marketers to maintain an active Twitter presence and share their best content. In addition, marketers should make it as easy for their audience to share their content themselves by adding social media sharing links and buttons to every piece of content they publish, whether it's a blog article, a landing page, an email message, etc.

As for the email digest itself, we think Twitter has some email optimization and conversion work to do, as well as probably some algorithm tweaking. Consider the personalized email digest my fellow HubSpot blogger, Corey Eridon shared from her inbox. See the first story in her digest? 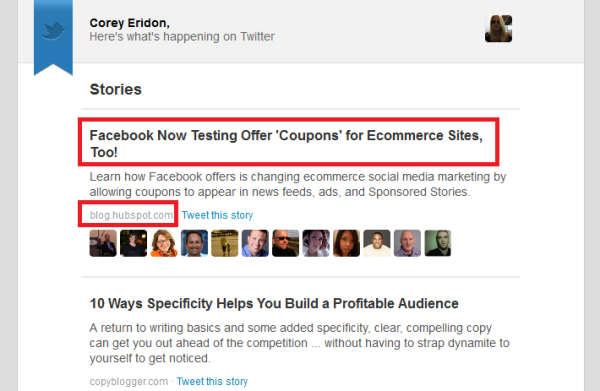 Yup -- Corey wrote that. And she subsequently tweeted this:

The algorithm behind Twitter's digest emails needs some tweaking...the first recommended tweet was of a blog I wrote. Not SUPER helpful :-P

Probably not necessary for Twitter to recommend a story that Corey wrote to Corey, right? Although she was probably flattered that her article was popular enough among the users she's connected to on Twitter to be featured in her digest. Still -- flattery isn't really the whole point here, is it? Content discovery is.

Furthermore, Twitter might want to think about better optimizing its email digests for click-throughs. Those tiny little "Tweet this story" links could be a little bit bigger, bolder, and more attractive, and did you even realize the headlines of the stories the digest features were even clickable? If it weren't for Twitter mentioning that fact in their blog article explaining these weekly digest emails, I never would've picked up on that. Moreover, were you given any indication that, if you click on the thumbnails of the people pictured, you'd see their tweet about the story? I sure wasn't, but if I clicked on them, that's what I'd get.

Let's hope that with Twitter's recent acqui-hire of RestEngine, its email digest gets optimized and improved over time.

What do you think of Twitter's new weekly digest email? How much do you think it will help users discover the marketing content you promote on Twitter?