Yes. It’s one of the most powerful words in the human language. And if you think about all the things we do as marketers, it’s ultimately to get people to say "yes" to something. 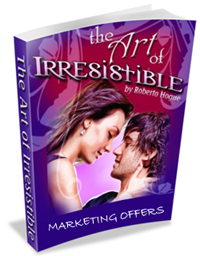 Yes to opening your email. Yes to clicking on a link. Yes to downloading, signing up, donating, or buying. And your job's not over after just one yes -- it takes several progressive "yeses" in order to move someone down your sales and marketing funnel.

So how do you persuade more people to say "yes"? Perhaps Gmail can give us a clue ...

The Story of Gmail

In March 2004, Google launched a private beta of their free email service, Gmail. The company originally invited 1,000 opinion leaders to use the service and then allowed them to invite their friends and family.

During the early months of the initial beta phase, the exclusive nature of the accounts caused a fast-growing demand for gmail.com email addresses, to the point where people started buying them in order to get their hands on one. That’s right, people where buying a free email service. According to PC World magazine, Gmail invitations were selling on eBay for as much as $150, with some specific accounts being sold for several thousand dollars.

Gmail was on fire. At the time, it was the hottest new service out there. But here’s the problem. Over the months following the launch of the beta program, Google began to roll out invitations to more and more users. When Gmail increased the supply of invitations to the point where anyone could have one, the buying and selling market for Gmail invites collapsed.

Now, anyone can instantly own Gmail address ... without an invitation.

The Secret to Irresistible Marketing Offers

The story of Gmail’s launch teaches us something important about getting more people saying “yes” to our offers.

When something is exclusive, scarce, or in high demand, it becomes more desirable. Whether they are whitepapers, free trials, memberships, sales promotions, or downloads, these irresistible elements can overcome a lead's typical friction, doubt, or concern.

Why do these elements work? Because they trigger a physiological reaction that makes an offer more valuable. People need to perceive the value of your offer to be greater than what you’re asking for in return. The higher the perception of value, the more irresistible the offer.

So, how do you make an offer irresistible? Let's break down the three ingredients for irresistible marketing offers -- go ahead and steal these for your next email marketing campaign, landing page, PPC ad, or promotional campaign.

If you look at the principle of supply and demand, you’ll notice that when supply is limited, demand goes up. Scarcity has a psychological influence on us, making us want something even more if there isn’t enough to go around. Scarcity is great because it creates a fear of shortage, and thus a sense of urgency.

Limited time offers are among the most popular in the scarcity category. Just think about your average car dealership. Practically every commercial is a limited time deal. “Get 0% financing before it’s gone!”

A few weeks ago during the MarketingSherpa Optimization Summit, HubSpot performed a live experiment to test whether a limited-time offer performed better than if there was no scarcity factor at all.

We built two different landing pages, a control (no scarcity factor) and a treatment (limited-time offer), to promote the download of a special report, How to Segment & Integrate Your Emails for Better Results. 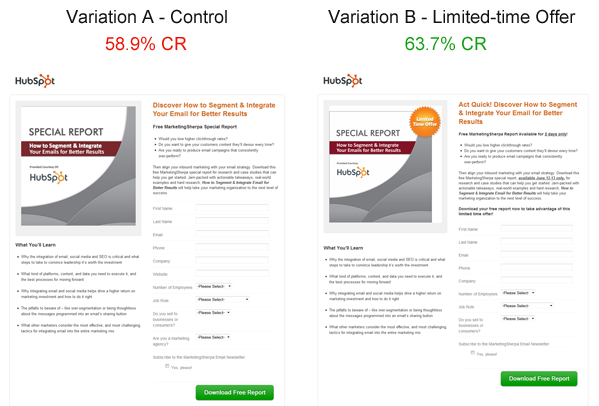 To no surprise, the Treatment (2-day limited time offer) outperformed the control by 8%.

This is the reason Google’s initial launch of Gmail was so successful. Because Gmail.com addresses where essentially in limited supply (you could only get one if you received an invitation), it created exclusivity and value.

Limited-supply offers work best when it is known demand is high, or else there isn’t a sense of competition or urgency (for example, if you were selling an item no one wanted, limited-time or supply technique might not matter). In summary, people tend to act on an offer quicker and more on impulse when it's in limited supply, but only if the supply is greatly limited and it's known that the demand is high.

What if an offer was only available for a certain time and quantity? Then you might have yourself an even more irresistible offer.

Groupon is the perfect example of using both tactics. All Groupon deals end within a certain timeframe, and they limit the number of people who can buy a Groupon. That’s a powerful combination. The site also packages these scarcity tactics with discounting, which is another great value-add, especially for ecommerce businesses. Many products on eBay also fall under the same bucket, particularly for auctions ending within a specified number of days and where there is only one item.

It’s a natural tendency for humans to copy one another, even without realizing it -- we like to be a part of tribes and social communities. So when we notice our social circle is doing one thing, we tend to follow suit. One great way to make an offer more valuable is to show that other people are participating in an offer.

Just make sure your claims are not only true, but believable. In addition, this technique can backfire if you use it as reverse statement. For example, if you are a nonprofit whose mission is to get more people to quit smoking, you may not want to advertise the fact that 90% of people smoke only because it makes the behavior more acceptable if so many people are doing it, too. See what I mean? The group mentality's not really helping your cause there.

Another way to make this technique effective is to make the offer far more relevant to your audience.

For example, if you were encouraging more people in the state of California to pay their bills on time, you could make one of two statements using statistics (another powerful persuasion technique):

It's not that the first statement is totally irrelevant. It's just that homeowners in Oakville would be more likely to pay their bills on time from the second statement because the second message is far more relevant due to its specificity -- that's the power of segmentation!

When you’re crafting your marketing messages, think about being very specific and targeted. Offers will become more irresistible if they are closely aligned to the beliefs, wants, needs and emotions of your target audience.

After Prince William and Kate Middleton got married in April of 2011, no one could stop talking about Kate’s wedding dress. Within hours after the wedding, vendors began making near-identical copies or similar styles of the Stella McCartney-designed dress. Even vendors such as David’s Bridal now have a “Royal” category so you can dress “just like Kate.”

The Gmail story is very similar. Once Google gave email addresses to top influencers and bloggers, word spread, and suddenly everyone wanted a Gmail address.

When something is buzz-worthy, it creates high demand. In situations like this, you can align offers with “what’s hot.” Companies will often leverage newsjacking for this type of technique and it works very well for offers, too.

As an example, early this year people couldn’t stop talking about Pinterest. I mean, its growth was ridiculous. HubSpot capitalized on this craze by creating the first Pinterest ebook for business owners and marketers, How to Use Pinterest for Business. It quickly became one of HubSpot’s most successful ebooks with more than 90,000 downloads and 25,000 new leads to date. Because it was the first and only ebook available on Pinterest (and we made sure people knew that), and learning how to use Pinterest for marketing was in high demand, it made the offer more unique and thus more irresistible -- that's the power of leveraging both timing and popularity!

A well-constructed offer using these secret ingredients is key to persuading your audience they should take a desired action. After all, it’s your job as a marketer to get more people saying "yes" to your offers.

However, all of these techniques can backfire if you use them for trickery. It’s important to avoid over-hyped marketing language that, while driving conversions, doesn't provide offers that actually live up to the hyperbole. But when used appropriately, these persuasion techniques can work magic making your offers seriously irresistible!

Do you have any other persuasion techniques that have worked well in your marketing? Share what's worked for you in the comments!

Easily design an ebook to get more leads from your website.