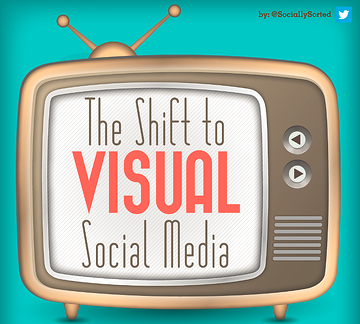 Like a moth to a flame. Could there be a more perfect analogy for humans' innate attraction to visuals? I think not. If you agree with me on this, then you can easily understand why visuals have become so important to online marketers' content strategies, especially when you think about the increased emphasis social networks like Pinterest and Facebook are giving them.

Just consider the facts. According to HubSpot's own research, photos and images on Facebook generate 53% more Likes than the average post. Furthermore, Shareaholic recently reported that Pinterest is now the 4th largest traffic driver worldwide. These stats and more are highlighted in a new infographic from Socially Sorted, which features how the shift toward visual content in social media has developed, as well as six tips businesses can follow to leverage the power of visual content in social media. Check it out ...

1) 44% of users are more likely to engage with brands if they post pictures than any other media. (Source: ROI Research) Tweet This Stat

8) Engagement from Instagram users is as much as 10 times greater than other platforms. (Source: CEO David Atkinson, SumAll.com) Tweet This Stat

Ready to get moving with visual content? Check out this blog post to learn more about how to incorporate visual content into your various marketing channels.