5 Business Insights You Can Get From A Funnel Report

As businesses grow and scale, we want changes to the process, teams, and infrastructure to be supported by data. It’s essential teams are able to build reports that clearly articulate performance, not just around the core metrics and KPIs for the business, but in ways that can help illuminate where there is space to improve or where any current roadblocks might be hiding. The funnel report does both. One simple report can help guide the decision-making around things like sales process, channel promotion, and team performance. 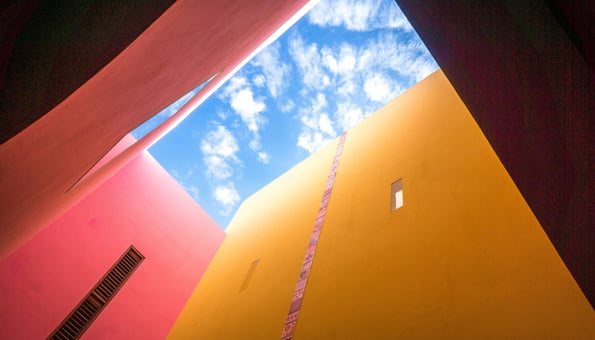 They can give you conversion rates between those stages and can help both marketers and salespeople alike better understand what is working well and where there might be places to improve. For the contacts funnel report, we use the contact property Lifecycle Stage to see how they're moving (eg. lead > marketing qualified lead > customer). For deals, it looks at how the deal moves through each stage in the sales pipeline (eg/ demo > negotiation > closed won).
You can view your funnel reports in 2 ways:

Now that we're clear on what a funnel report is, let's jump in to have a look at how we can leverage them for the business:

1. Understand the win probability of your deal stages

Whether you’re setting up a new pipeline, or doing a review of the existing ones, one of the core features that impacts forecasting is the win probability. In HubSpot, each deal stage has a space for win probability that reflects the percentage of chance deals in that stage have of actually closing. Then, when it comes to forecasting, the tool only forecasts that percentage of revenue in the pipeline. This is to prevent forecasts being blown into bigger numbers than they should be based on deals that are still very early in their sales process. For example, if I have five stages in my pipeline, we set it so that when I have a consultation completed, it’s a 40% chance of closing. If I have 4 deals in that stage of the pipeline, all worth $100,000, then there is a total of $400,000 in that stage of the pipeline. However, instead of forecasting that we can expect $400,000 for that month they’re set to close, the tool will only forecast 20% of that: $160,000.

So how do we leverage the funnel report here?
We can customize the funnel report to show only the single deal stage you’re reviewing, along with the closed won stage. This will give you the conversion percentage for that stage so you can cross-check that the currently set win probability is correct.
Then you can go to your deal settings (Settings Cog > CRM > Deals) and select the pipeline to review what is currently set as the win probability for that stage.


Rinse and repeat for other stages you’re looking to review.

2. Audit your deal pipeline for any stages that are not being used.

When you look at your funnel report overall, sometimes it can seem like a certain stage is a bottleneck and that no deals are getting past there. When you see this, you might also feel like that’s not very accurate because you know you do have deals that are closing each month. Stages currently sitting in your sales pipeline may not be aligned with the sales process your reps are going through. To see if this is the case, cross-reference with any stage funnel report. This will show deals that have been through any of the selected stages regardless of which order so if there is a stage that isn’t being leveraged as regularly as the others, the data will show it.
You will see if there is a stage in the middle that has significantly fewer deals in it. tIf there is, that is a stage people are potentially skipping over on their way through the pipeline.

What can you do to understand why they’re not using that stage? Often, what we see is that people create deal stages that are not consistently part of the sales process. Examples I’ve seen recently are for things like "prospect on hold," "needs more time," or "disqualified." Every deal stage in the pipeline should be:
For this reason, things like "email sent" or "disqualified" are not great deal stages because they don’t happen at every deal, or if they do, there is no reason to increase the win probability. For tasks that need to happen (like a follow up email), we can actually create tasks which will make rep management much easier. By using the tasks tool, reps can have all their to-dos in a single location.

3. Identify top-performers for closing deals (at an individual or team level)

When it comes to sales teams growing in both skill and size, one of the great things we see people wanting to do is identify their top performers. Sometimes it can be at an individual level, sometimes it can be a team level to understand their processes for things like knowledge-sharing. Either way, you can build a funnel report in HubSpot to help you break this down. We can do this in a couple of ways:

Option 1: Create a dashboard that has funnel reports for each of the various individuals or teams you’re looking to compare:

Now you have a dashboard you can consistently review for your top performers (or to identify anyone who might be struggling and need extra help or coaching). You can also add a filter on the dashboard for timeframe, to change up the period you’re reviewing. 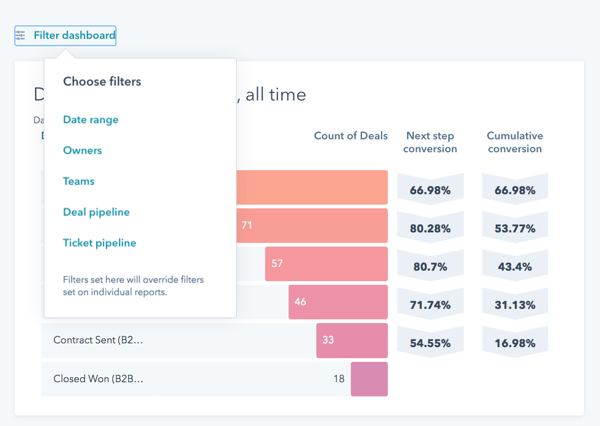 Option 2: Have a single dashboard with various reports on it and change the filter

You can also have an overall reporting dashboard for salespeople/teams that is more than just a funnel report. Include things like their deals closed won each month by the original source (Google/social/etc), reports around their activity outputs, and more. Check out dashboards created for this purpose like the Sales Manager Dashboard Template. 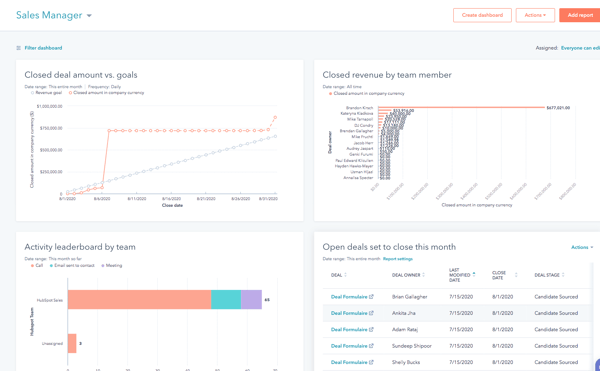 As long as you follow all steps for the previous option and have a funnel report on that dashboard, you can then use the filters at a dashboard level to set which team or individual you’re looking to review.

4. Understand the overall impact of your lead nurturing program

When we're looking at contacts, it's important to understand how they're progressing. You can use a funnel report for contacts to understand lead nurturing impact, channel performance, and quality of marketing generated contacts. Let's take the example of evaluating your overall lead nurturing. Many customers have lead nurturing in place to take people from being a standard lead to a marketing qualified lead (typically something that is triggered by actions like requesting a demo, a quote, a trial or a consultation or other sales-ready actions). To understand the impact, create a funnel report specifically for lead>MQL conversion. To do this:

5. Identify your top performing marketing channels based on conversion

From more of a marketing standpoint, a funnel report can be a great way of understanding which of your contacts are most likely to turn into a customer. You can then use this information to target which channels you leverage going forward. When it comes to creating a standard lifecycle stage funnel, it's pretty much identical to building a deal stage funnel.

Let's wrap it up

Each of these five reports works as a different way of understanding what is happening with your prospects and opportunities. Once you're confident with setting filters, timeframes, and choosing between the any/all stage option, you can go on to filter by almost any contact or deal property you have to get very specific insights on channels and segments. See what's working for you as you move prospects and opportunities towards being happy, long-term customers.

Have you got other ideas for using a funnel report, or a way that is proving really valuable for you? Let us know!