Learn more about how to make your business stand out on Twitter. 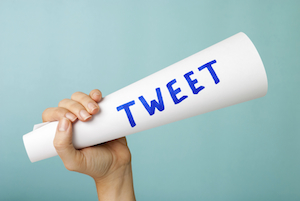 Three hours. This is the average shelf life of a tweet that you probably spent an inordinate amount of time perfecting.

(What verbiage should I use? #Hashtag everything? Or just one word? Oh...and how about this image? Yeah...definitely this image. Crap! I put the subject’s handle first..now it’s only a mention!)

You feel that? These are early signs of Twitter induced anxiety.

It’s how long you have to resonate with your audience. To convey value and inspire action. As contradictory as it may sound, three hours is all the time you have to make a lasting impression on Twitter.

As a result, tweeting simply to fill air time isn’t an effective measure for producing the results you’re looking for. Neither is spending 25 minutes crafting the (self-proclaimed) single greatest tweet ever to grace the internet only to experience minimal engagement.

So what’s the alternative? Can we really know what our followers will find interesting enough to click on? More than any other social network, brands tend to boast their most robust following on Twitter. I mean, can you really know 25,000 people well enough to gauge their interest?

The most successful tweeters have something of their own to say.

Marketing agencies are often encouraged to model themselves more as a media company in order to satiate the informational needs of their audience. So let’s think of the most successful media outlets: They’re creating original content that gains traction for the very simple reason that it informs the audience from an angle that can’t be found elsewhere. Whether it’s news or an editorial piece, an exclusive point of view is extremely effective at generating interest.

We get it; you have a product or service to sell. But Twitter is a more effective sales tool if the content you’re sharing is helpful, and most importantly, unique to your overall brand.

Sound familiar? That’s because this is how we still consume media of any kind. If the story on the front page (or cover) resonates with us, we buy the issue. So let your content do the selling for you, and position your content in a way that appeals.

They’re likely moving quickly through a crowded news feed, looking for the latest trends and news they’re missing out on. Fear of Missing Out (FOMO) is a common fear amongst users. So rather than simply share each blog article at face value, put a unique spin on it that appeals to the FOMO audience.

The latest on why your business #blog is struggling to see results http://t.co/KHxPyOpUv7

More than any other social network, Twitter has become a resource for staying current with news and trends. In fact, Twitter recently announced a partnership with CNN in an effort to transform how people experience breaking news through the social network.

Just because you may not have broke the news about the newest Facebook algorithm doesn’t mean you – as the messenger – hold no value. After all, how different would American history have been if Paul Revere hadn’t spread the message of a British invasion on his midnight ride through Massachusetts in 1775?

While no one can be sure, Revere certainly wouldn’t be remembered as the hero he is today.

My point? The spreading of an important message is just as important as the message itself. Identify the news that would be of great interest or concern to your audience, and consider it your responsibility to communicate it to them. You may have heard the term “newsjacking,” and this is exactly why. News is easily the most shareable of social media content, as it plays right into the real-time engagement that attracts users to social networks in the first place.

For optimal engagement, use hashtags related to the story in your tweets, as this increases the likelihood of gaining traction and expanding your reach. In fact, tweets with a hashtag get 2x more engagement.

Pro Tip: Start using a news aggregator like Feedly in order to stay current with the publications and content that are important to you and your audience. I usually have it opened in a tab all day, as you can never be sure when the next industry-shaking story may break.

And now for the most obvious statistic you’ll read all day: Tweets with image links get 2x the engagement rate of those without (Source: Buffer).

Using images in your tweets became even more important last fall when Twitter began auto-displaying them. So rather than having to click an image to view it, your followers now automatically see any images you include in a tweet, so make it a good one.

As fast as Twitter moves (there are 58 million tweets every day), a great image can slow it down just long enough for you to be noticed.

To paraphrase Gary Vaynerchuk, “with so much information out there, we need people to aggregate this information for us.”

He often refers to it as DJing, in that not only is sharing helpful content a responsibility of the modern marketer, but equally important is spinning it – or DJing it – in such a way that connects with your specific audience.

Look at it this way: Imagine if a club promoter hired a DJ who played nothing but 70’s easy listening for a college party. Everyone loses. You can’t amp yourself up for finals week to a Luther Vandross track. It’s imperative that you know your audience.

If you’re sharing helpful content that engages, inspires, and most of all helps, you’re making the most of that three hour window.