Where Do Groceries Fit Into Ecommerce? [New Data] 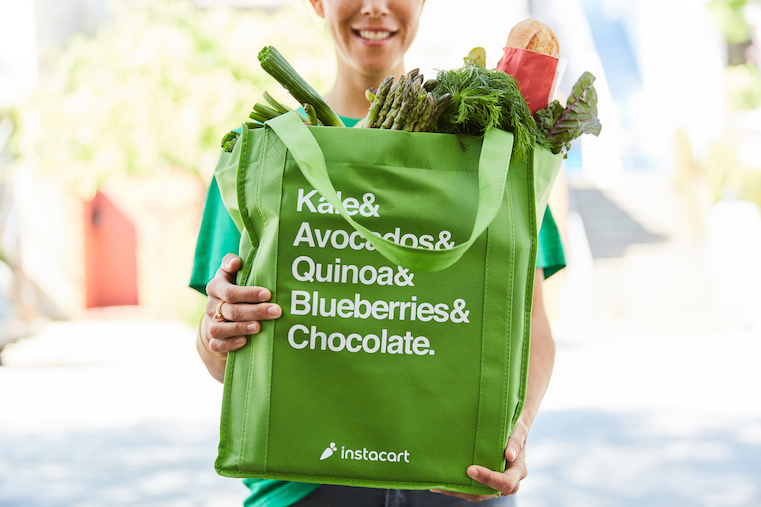 "I buy everything online."

In certain circles, it's not uncommon to hear those words uttered with some frequency. And within certain categories, it's more true than others. After all, 30.2% of computer and electronics retail sales take place online, as do 27.4% of apparel sales.

But for some of us, online shopping extends beyond a pair of shoes or a smart speaker. Thanks to some ecommerce services -- like Amazon's Subscribe and Save option -- certain shoppers have gotten into the habit of setting up a monthly schedule to buy items like paper towels and vitamins online, as well.

And for a segment of shoppers, we really do buy everything online, including our groceries. But according to a new report, we might not be in the majority, and online grocery sales -- only 3% of which take place online -- have a long way to go before they reach the ranks of electronics or apparel ecommerce.

We wanted to dig a little deeper into consumer shopping habits -- and find out just how many people buy groceries online, and how often they do so. Here's what we learned.

How Many People Buy Their Groceries Online?

To learn more about the prevalence of online grocery shopping among consumers, we asked 823 people across the U.S., UK, and Canada: Have you ever ordered groceries online through a delivery service like Instacart, Peapod, or Amazon Fresh?

Across all three regions, most respondents -- 67% -- indicated that they do not buy their groceries online.

When responses were broken down by region, that figure was especially high in Canada, where 71% of respondents said they've never bought groceries online.

Interestingly, the U.S. showed the highest number of respondents who have bought groceries online -- despite some findings that consumers in non-U.S. countries, like South Korea and Japan, are generally "more comfortable" with making purchases on their mobile devices, including groceries. (Last month, for instance, we found that most users in the U.S., UK, and Canada did their holiday shopping offline or using a desktop computer.)

According to a recent story published by the Atlantic -- which included the above notes on mobile shopping habits in non-U.S. countries -- part of the reason behind a higher rate of online grocery shopping in other nations could be due to the "few large population centers, which makes it easier for delivery companies to set up shop in a few big cities and access a huge amount of purchasing power."

In the U.S., large cities are spread throughout the continent, creating greater distribution barriers. 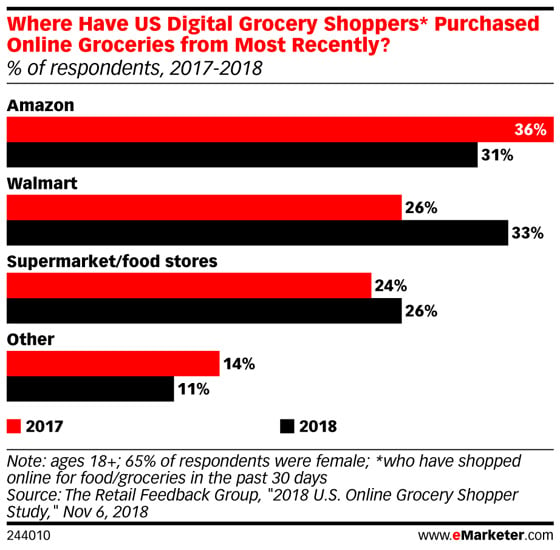 But when online retail giant Amazon entered the digital grocery delivery space -- first with its Fresh service and then with is acquisition of organic supermarket chain Whole Foods -- some predicted that its preexisting distribution structure would make it a leader within this category.

Out of those consumers who say they buy groceries online, we wanted to find out how frequently they do so. We asked another 854 people across the U.S., UK, and Canada: How often do you buy groceries online through a delivery service like Instacart, Peapod, or Amazon Fresh?

Again, we found that the highest number of respondents -- 56% -- indicated that they've never bought groceries online before.

Among those who do buy groceries online, however, it seems to be something of a regular habit, with 14% of consumers saying that they do so on a weekly basis.

When broken down by region, the results were similar to those of the previous question, with U.S. respondents accounting for the largest number of online grocery shoppers for most answer choices.

However, we also began to see hints of the findings indicated in the Atlantic story regarding the greater popularity of online grocery retail in the UK, with the highest number of respondents in that region indicating that they buy these items online on a weekly basis.

To see how these results would compare to a more micro-level survey, I posed a similar questionnaire to the members of my team, asking: Do you ever order your groceries online (e.g., through Instacart or Amazon Fresh?) 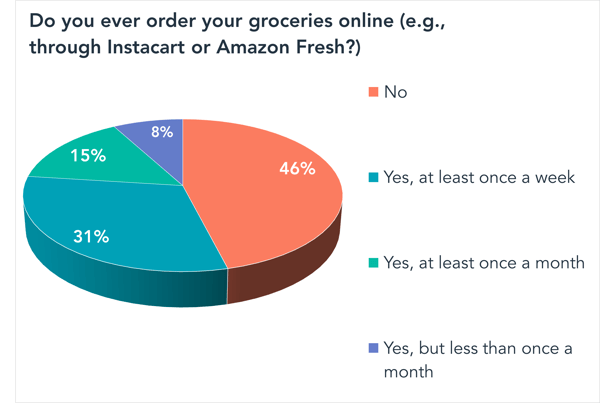 Even in a tech-centric environment -- one that's located in a highly-populated U.S. city -- most of my colleagues (46%) noted that they don't buy their groceries online.

For those who prefer to buy groceries offline, the preference often boils down to the required planning -- and purchase minimum -- of using a digital shopping service.

"A lot of the fresh produce [I ordered online] went to waste because I was trying to meet the service's $60 dollar minimum," says HubSpot Web Developer Taylor Swyter, "so I bought too much. I would definitely try it if I had a lot of non-perishables to buy."

Others prefer the spontaneity of buying groceries on an as-needed basis, rather than risking the potential food waste that Swyter points to.

And as for those who do prefer to buy groceries online, the reasons often cluster around convenience and location.

"I started using an online grocery delivery service a few years ago when I moved to the North End neighborhood of Boston," explains HubSpot Senior Content Strategy Marketing Manager Carly Stec. "There weren’t any major grocery stores close to my place — just a handful of small, overpriced markets. The service saves me a ton of time in terms of commuting, shopping, and waiting in lines."

Stec's sentiment is one that could be more broadly found in urban areas, where residents are less likely to own cars -- and therefore might be able to transport less grocery cargo in a single trip.

Even Swyter acknowledges the convenience of such a service in those types of situations -- one that he experienced with a former roommate who used an online grocery shopping app.

"But now, I have a grocery store really close to my house," he notes, "so it's not that much of a hassle to go."

Even among those who have adopted a preference for online grocery shopping, there remains a certain amount of nostalgia for a brick-and-mortar supermarket experience -- but one that is rarely indulged.

"At first, I missed the 'grocery shopping experience' — things like discovering new products and hand-selecting my avocados," explains Stec. "But I quickly grew used to the convenience."