Facebook Cracks Down on News Feed Spam From Brand Pages 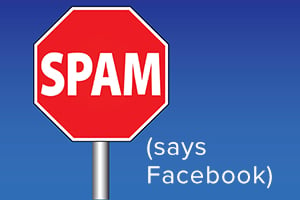 We all hate spam. (The web version -- not the canned good. I'll let you speak for yourself on the latter.)

Well, Facebook couldn't agree more. Yesterday, Facebook announced it would be cracking down on spammy stories in the News Feed -- particularly those from brand pages that purposely try to game the News Feed to generate more exposure.

Here's what you should know about what Facebook is doing -- and how your own Facebook Business Page could be affected.

If you're unfamiliar with the concept of "like-baiting," it's when a user posts something with the sole purpose of getting others to Like, comment on, or share it. It's a way of gaming Facebook's News Feed algorithm to generate more distribution and, thus, exposure for their brand.

Because users are more apt to respond to posts that directly request action -- in marketing, we call these "calls-to-action" ;-) -- and Facebook's algorithm rewards posts that generate more engagement, like-baiting is a tricky way for brands to get featured in the News Feed more often and seen by more users. Sneaky, right? Here's an example of a post Facebook would consider to be purely like-bait: 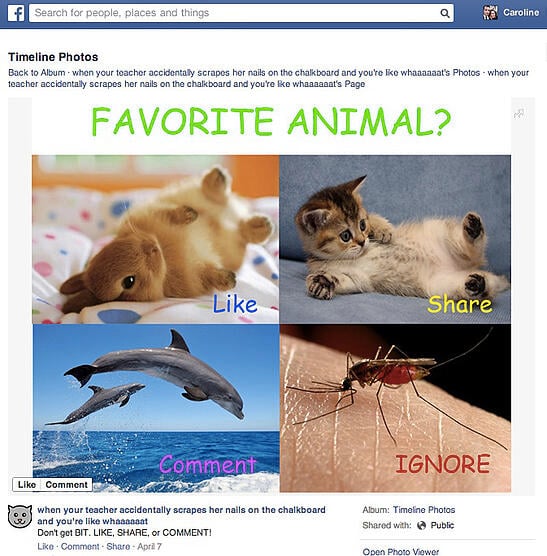 Because Facebook indicates that users consider like-bait stories to be 15% less relevant than other stories with similar levels of engagement -- and lead to much less desirable Facebook experience because they prevent other higher quality stories from getting featured -- Facebook reports it will be making improvements to better detect and prevent these types of stories from getting surfaced in the News Feed.

"Frequently circulated content" is not content that gets shared organically by users (which is exactly what you want!). Rather, what Facebook is referring to here is content uploaded by brands over and over ... and over ... again. Sounds annoying right?

Yeah -- Facebook users find the practice annoying, too, which is why they usually end up reporting the brand pages that are guilty of this practice to Facebook. As a result, Facebook indicates it will improve the News Feed by de-emphasizing these particular pages. In fact, some initial testing has shown that the change has caused Facebook users to hide 10% fewer stories from pages overall. Good stuff!

Last but not least, the oldest trick in the book: misleading links. You know -- the type that fool users into thinking they'll be clicking through to one thing, but actually direct them to something else. For instance, if I were to post a story that read, "Check out my new photo album of cute and cuddly kittens!" but actually sent you to a web page littered (hehe -- get it?) with ads, you'd be pretty ticked off at me, right?

Facebook is better detecting these types of spammy links by tracking how often Facebook users who click a link end up Liking or sharing the original post with their friends. As a result, they're reducing cases of spammy links in the News Feed, which has already led to a 5% increase in users clicking on links that take them away from Facebook -- indicating that users are finding content in their News Feeds to be much more trustworthy. Win!

If you haven't been employing these sneaky snake Facebook tactics, you have nothing to worry about. In fact, this is all great news for all you honorable Facebook Page admins out there. You'll likely enjoy better exposure in the News Feed as pages that do partake in these spammy practices get buried deeper and deeper.

In response to like-bait in particular, Facebook reassures brands that "this update will not impact pages that are genuinely trying to encourage discussion among their fans, and focuses initially on pages that frequently post explicitly asking for Likes, comments and shares."

In other words, keep wearing your white hats, and you'll be fine, folks.