What Makes a Presentation Great? Deconstructing an Awe-Inspiring TED Talk

Since he gave the presentation back in 2009, Simon Sinek’s TED Talk on inspiring action has racked up more than 12 million views. His presentation is the most popular TED Talk on business or marketing by a long shot. In fact, it is the second-most viewed TED Talk ever, surpassed only by Ken Robinson’s 2006 education-focused address on how schools kill creativity. 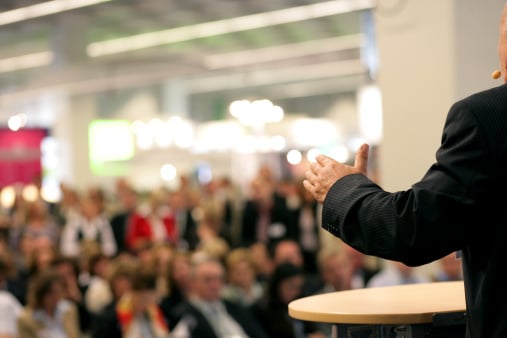 Some speeches feel like magic. They grab our attention and carry us through to the point of realization. While enormous credit goes to the skill of these orators, there are a few elements we can isolate in great talks and bring into our own practice.

Using Sinek’s wildly popular talk, let’s walk through these components. Also, I'll be posting some tips as to how you can enthrall any audience you speak to in the future.

First, though, let's take a look at the TED Talk in question:

He opens by asking the audience to question.

Note that I didn’t say he opens by asking a question, because it’s not about the question itself -- it’s about getting the audience in the mindset of questioning.

He opens with a series of questions designed to open the audience up to the idea they are about to hear. The questions are the vehicle, but the real purpose is to guide the audience into the talk and move them from the broad and conceptual to the very specific.

In an indirect way, he's laying out what he's going to cover, but perhaps more importantly, he's creating a gradual on-ramp for the listener.

Tip #1: Get your listeners in the mindset. You don’t need to start with questions (although that was certainly a good approach here). A well-constructed story or a staggering fact can also work to help frame the speech.

He introduces a clear and simple inflection point.

No one likes a happy ending quite much as a good plot twist. The inflection point in speeches is the point at which the journey turns in on itself. The tone changes, the focus shifts, and, typically, there's one line on which it all hinges.

For Sinek, this point happens at the conclusion of all of his opening questions with a simple statement: "There is something else at play here."

Then, very deliberately, he pauses, takes a breath, and lets that sink in for a moment: "About three and a half years ago, I made a discovery," he confesses to the audience. "And this discovery profoundly changed my view on how I thought the world worked, and it even profoundly changed the way in which I operate in it."

Tip #2: Know when your inflection point is coming. Give it space and emphasize when you deliver it. Use it as a milestone in your speech.

He makes the speech tangible.

A good speech alternates between grand insights and tangible examples, of which Sinek’s speech has three: Apple computers, Martin Luther King, and the Wright Brothers.

Each one of these examples allows us to view his theory in action. It gives us a frame of reference and model to follow. Beyond the detailed examples, Sinek grounds his narrative in research, and conversely, gives his research life through narrative. About midway through the speech, he provides his audience an interesting statement.

"None of what I'm telling you is my opinion," he said. "It's all grounded in the tenets of biology. Not psychology, biology. If you look at a cross-section of the human brain, looking from the top down, what you see is the human brain is actually broken into three major components that correlate perfectly with [this theory]."

Examples, data points, and scientific research all function in the same way for the listener. They act as proof points to build a stronger foundation beneath the primary message.

Tip #3: Weave concrete data, research, and examples throughout your talks. Don’t concentrate them too heavily, lest you loose the attention of the crowd, but build them in throughout.

It takes Sinek seven sentences and nearly a full minute (epochs in speechwriting) from the moment he introduces that something more is at play here, to the moment he reveals what that thing is.

He doesn’t need to wait that long. After all, the subsequent sentences don’t add any new details to his point. In waiting, however, Sinek reels his audience in more closely and builds up the significance of the coming inflection point. His pace slows, his eye contact grows more direct. It’s as if you can see the hairs on his neck begin to stand up.

He plays with parallel structure and contrast.

Parallel structure is a stylistic choice that creates a rhythm in speeches. It involves the repetition of a series of words or phrases that are similar in construction and cadence.

Contrast is a type of parallel structure. Think of the famous John F. Kennedy line: "Ask not what your country can do for you. Ask what you can do for your country." The repetition of "Ask" and the balance of the second line with the first makes this part of his speech memorable and impactful.

Many people will advise that you talk slowly when giving a speech, but as Olivia Mitchell smartly points out in this post on public speaking, speed of pace isn’t as important as carefully placed breaks.

Mitchell references Gary Vaynerchuk, who speaks rapidly as a natural state. If you slow down Vaynerchuk, he’ll sound unnatural. Instead, she advises "chunking," a term she credits to her partner Tony Burnes.

Quite simply, chunking is forcing yourself to break your speech up into chunks of words, making pauses a necessary step before moving onto the next chunk. Sinek similarly is smart with pauses. He knows the talk well enough to isolate the critical pivots and points.

Tip #6: Before you give a speech, build in pauses and performance moments. Keep these moments few and far between for impact, though. Also, underline the lines your audience should be tweeting from their seats and make sure you build your emphasis around them.

It’s not about the slides.

In the history of TED Talks so far, there have only been two talks that have broken 10 million views: Sinek’s talk and the aforementioned one by Robinson. These two speeches have one very important thing in common: No slides.

Anderson talks directly to the audience, while Sinek uses only a pad of paper and pen to illustrate his point. In fact, the act of drawing out his Golden Circle is an education moment in itself. It builds in an additional moment of pause and suspense to keep the audience focused.

Now, this is not to say that slides are detrimental to a presentation. TED Talk speakers very frequently use slides. I gave a talk just last Saturday that was built around a carefully constructed slide-deck. But the fact that the top two speeches on TED Talks don't use slides does give credence to the fact that you don’t need them to keep an audience’s attention. In this world of multiple screens, sometimes a lone, passionate speaker is plenty enough.

Tip #7: Don’t be tied to slides. There may be a better way for you to help the audience visualize your story. Think about videos, hand drawn charts, or just the power of your own voice.

You can artificially portray excitement. You can perfect your pace and tone. Even humor can be practiced and learned. But a genuine fascination in what you’re saying? That's hard to fake.

Sinek’s delivery was so good because he allowed himself to get lost in it. He connected with the audience because he was right there with them, marveling at the simplicity and significance of this idea. He was earnest. And that makes the audience feel like they are experiencing the talk together with the speaker for the first time.

Tip #8: You spend lots of time getting the outline and words right for your speech. Dedicate at least a little of that time to remind yourself why your topic is so fascinating to begin with. Throw yourself into it. Show some curiosity and awe while you speak.

Chris Anderson, founder of TED, created the platform to enable great ideas to grow and spread. Every talk you give is an opportunity to do the same.

In an essay for the Harvard Business Review this spring, Anderson did his best to put the practice of brilliant TED Talks into words: "When I think about compelling presentations, I think about taking an audience on a journey. A successful talk is a little miracle -- people see the world differently afterward."

What are some of the great speeches you've seen, TED and otherwise, and what made them so enthralling?