A Brief History of New Year's Resolutions: Where They Began & Why They Fail

Ah, late December -- I remember it well. It was a time for reflection, sugar, and salt. For many, it was also a time to look ahead to the looming new year, and think about where we could improve. We resolved to do things like lose weight, find love, and save money.

But once the new year has come and gone, sadly, only 8% of us successfully accomplished what we set out to do.

It wasn’t always like that. There’s actually a very long, compelling history behind how we started making resolutions in the first place, and it looked a lot different at first. And as these resolutions evolved, our motivation to maintain them also shifted, eventually resulting in the aforementioned dismal success rate.

So, how did we get here? And why is it just so darn tricky to stick to our resolutions? Let’s step back in time and explore just how this tradition works.

According to the History Channel, New Year’s resolutions date back roughly 4,000 years, to when the Babylonians -- a population living in what was then Mesopotamia -- commemorated the new year in March, when the season’s crops were planted. The celebration consisted of a 12-day festival called Akitu, when either a new king was crowned, or loyalty to the existing monarchy was renewed.

But it was also a time for the Babylonians to make certain promises -- things like settling debts and returning anything that wasn’t theirs to its proper owner. Maintaining these resolutions, they believed, came with karmic retribution, in that kept promises would be rewarded with good fortune in the following year.

The Romans are said to be the first to create the concept of January 1 and designate it the first day of the year, beginning around 46 B.C. The name of the month is rooted in Janus, a god of particular importance to the Romans, due to his two-faced nature. It was believed that Janus could use his two faces to both look back on the outgoing year, and forward to the next one. Similar to the Babylonians, Romans made vows of good deeds to Janus before the new year arrived.

Where They Are Now

Each December, the Marist Institute for Public Opinion measures the most popular resolutions for the coming year. Starting with the top resolutions for 2017, we worked backwards to see how these resolutions have evolved -- or not -- over the past five years. 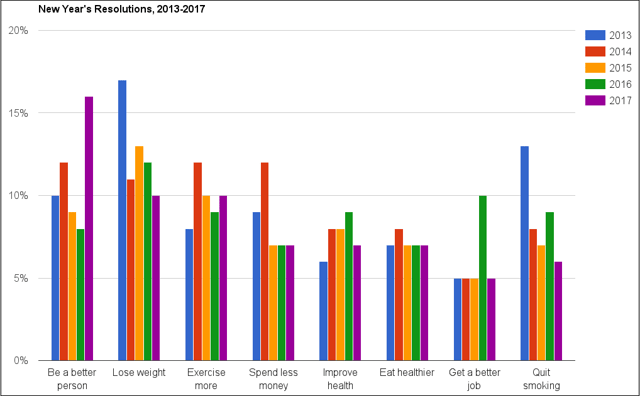 We’ve certainly seen a shift in resolutions since the Babylonian and ancient Roman era -- going from good-doing to mostly self-improvement. However, 2017 is seeing a bit of a shift back in that direction, with more looking to “be a better person” this year.

It should be interesting to observe if that new trend influences the typical marketing response to New Year’s resolutions, and what -- if any -- shift we’ll see from campaigns aligning with “classic” resolutions to ones that attempt a deeper sense of self-improvement.

But there’s some intricate psychology between our resolutions and the way brands respond to them. In her book The Psychology of Overeating: Food and the Culture of Consumerism, psychologist Kima Cargill explores how, when it comes to goals like diet and exercise, there’s a human tendency to consume a larger number of things that we believe are a means to an end. Rather than trying to “locate purpose in [our] life,” Dr. Cargill writes, “shopping, spending, and eating are all part of the frenzy of consumption that has overtaken our culture.”

Cargill elaborates on one particular client as an example, citing that person’s thousand-dollar spending on a personal trainer, top-of-the-line juicer, high-end fitness attire, and specially branded health food in response to her resolution to lose weight. That client, by the way, ultimately fell into a pattern of abandoning her resolutions and starting them over again. Sound familiar? I know it does to me.

That behavior reflects what Cargill believes is an “underlying belief that consumption solves rather than creates problems,” and brands respond in kind. We see an uptick in campaigns from fitness and weight loss brands every January, leading to an uptick in new gym memberships -- 67% of which go unused. And with so many people resolving to lose weight year after year, some brands have become extremely skilled at convincing us to use them to meet our goals. Check out this 2015 ad from Virgin Active, which combined two common resolutions -- exercising more and finding love.

But this psychology paves the way to figuring out why 92% of New Year’s resolutions fail. And it seems to indicate two core reasons:

1) The Goals Are Too Big

Not too long ago, researchers at the University of Pennsylvania discovered the “fresh start effect” -- the fact that something saliently new, like a year, age, home, or job comes with an inevitable opportunity to start over again. Unfortunately, as Julie Beck wrote for the Atlantic, “A fresh start is only fresh while you’re anticipating it. Once the New Year begins, it’s no longer special.”

As we anticipate these landmarks, they seem like big, remarkable occasions, so we pair them with equally sizable goals. But given that many of the most common resolutions are fairly general -- get fit, find love, save money -- it can be hard to determine where to start. And when you're faced with a broad task and an unclear plan for tackling it, you're -- in most cases -- setting yourself up for failure.

Take the aforementioned example of Cargill’s client -- it seems that none of those purchases came with a tangible plan for how each of them would be used to achieve the overarching goal of losing weight. Instead, the client spent a large sum of money on products that were intended to achieve several new behaviors at once.

Instead of imitating that behavior, we recommend setting micro goals -- and not limiting them to January 1.

Ask yourself: "What’s one small change I can make that will help me lose weight?" Adding more veggies to every meal, doing ten sit-ups when you get out of bed, or skipping dessert 1-2 days per week are a few.

These minor modifications should be easy to do among the other tasks that come with a new year, like catching up at work after time off for the holidays.

Luckily, there are plenty of resources out there to help you start with these small goals. The Google Calendar app (free on iOS and Android) has a “Goals” feature, which you can customize according to what you want to accomplish, and how frequently you can do it -- you can start with something as small as once a month, or as often as six times each week. Plus, Google uses what’s already on your calendar to figure out the timeslots you have available for your goals.

Here’s how I used it to schedule weekly time for volunteer work:

Something happens when you resolve to break a bad habit, Dr. Nicole Lipkin explains on ThinkGrowth.org -- you “fight against your natural, human urge to gain over lose.” That’s especially true when your undesired behavior has become deeply ingrained in your day-to-day operation. “Smoking, laziness, boredom, compulsive eating, overspending,” Dr. Lipkin writes, “are all default behaviors based on habitual brain wiring to give you what will make you feel good.”

Take smoking, for example. By now, we all know the health risks it poses. But until we’re faced with the immediate repercussions of the bad habit -- like in an extreme case, losing one’s trachea -- it’s extremely difficult to fight against the urge to gain the pleasure you might receive from indulging in it.

But there’s an answer to that conundrum, and it lies in our naturally human aversion to loss -- the psychology that explains why it hurts us when we lose money, for example, much more than winning money brings us pleasure. So what if, every time you resolved to quit and failed, you immediately lost money? The immediate risk increases the stakes, playing into our loss aversion psychology.

Websites like stickK exist for a reason. It can be used to place financial wagers on your goals with a Commitment Contract -- “a binding agreement you sign with yourself to ensure that you follow through with your intentions.” While you aren’t immediately charged, you are required to provide billing information as soon as you make a commitment. That way, if you don’t stick to it, you’re immediately charged the amount that you’ve wagered.

I don’t know about you, but I don’t really feel like coughing up $25 every time I back out of a volunteering project -- and I’m sure that I'm not alone. Maybe that’s why folks with financial stakes are up to 3x as likely to successfully achieve their goals. As the numbers show, the reward of accomplishing what you’ve set out to do isn’t always enough motivation. Supplementing it with an immediate loss if you don’t stick to your resolutions mitigates the chances of bailing on your resolutions.

Ready to Make a Plan?

Maybe you're part of the 38% of people who never make New Year's resolutions. But with these resources, you might feel a renewed sense of motivation.

And maybe that's because they'll help you move past the "fresh start effect" that we mentioned, and see that goals can be planned for any time of year. With the right, manageable steps, as well as a healthy balance of risk and reward, the new year doesn't have to be such a big deal -- and it doesn't have to pose insurmountable obstacles to achieving worthy resolutions.

How do you maintain your goals and resolutions? Let us know in the comments.

The Ultimate Guide to Company Culture

Why Playing Games at Work Could Increase Productivity and Employee Satisfaction

20 Nerdy Valentine's Day Gifts for the Marketer in Your Life