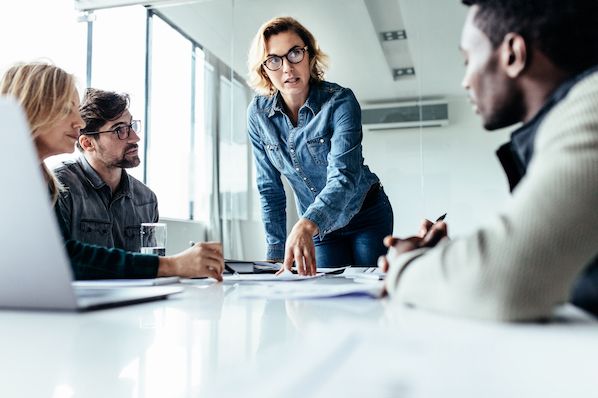 Last week, on the Fourth of July, I was feeling rather patriotic, so I decided to binge watch the HBO classic Band of Brothers. The critically acclaimed mini-series takes place in Europe during World War II, recounting Major Richard Winters’ leadership of Easy Company from a grueling boot camp to the invasion of Normandy and on to the end of the war. The series is a touching tribute to these brave soldiers, and in my humble opinion, it deserves all seven of the Emmys it won.

But if there’s one thing I’ll remember about this show, it’s a scene that’s only three minutes long: Major Winters orders an ambush on Axis soldiers who are resting in an embankment across a field from them. But before his soldiers can charge, he tosses a smoke grenade and bolts across the field alone. He wanted the Axis to target him before they could target his men.

Major Winters was willing to sacrifice his own life to preserve his company's, and his courage and selflessness remind military leaders everywhere that you should serve others before you serve yourself. If you lead a team at work, this scene will also resonate with you -- your job is to help your people succeed and achieve their goals.

But being a great leader isn’t something you can easily pick up and just start doing. Like any other skill, you have to work on it. So before you start channeling your inner Major Winters, here are eight management skills you need to learn to lead a team toward success.

1. You make your people feel safe at work.

Major Winters was an easy leader to follow because he always trekked into danger first, fought for his men, and did everything he could to protect them. He absorbed most of the risk so his men had a better chance of survival. And they respected and revered him for it.

Great leaders are always willing to protect their people, even if it means sacrificing their own interests, comfort, and a good metric or two. They want their people to feel safe at work. They want them to always know that they won’t get chewed out or lose their job if they fail. Their people know they can grow from these failures. And this results in a higher level of trust and cooperation.

When a leader risks and sacrifices herself to protect and improve her people, they’re willing to move mountains for her. Why? Because they know she’s already doing the same for them.

2. You can change your mind.

Even the smartest people get things wrong. But what seperates a good leader from a great one is the ability to admit that they’re wrong and change course in light of new information. Unfortunately, a lot of leaders won’t change their minds, even if it’s the right choice, because they don’t want to seem weak. Others have too much pride to admit that they’ve made a mistake. They’d rather pull rank and remind their subordinates that they’re in charge.

But admitting you were wrong requires a lot more strength than sticking to something that hurts your team or company, just because you've invested a lot of time and effort into it. For instance, Jim Whitehurst, CEO of Red Hat, a company that provides open-source software products, decided to go to market without integrating a newly acquired product into one of their new technologies in 2008. He didn’t want to spend three months rewriting code and making it open source. But he soon discovered that he had made a huge mistake: Red Hat's associates and customers didn’t like using the product. And the only move the company could make was to rewrite the code. It would push them a year behind schedule.

The delay angered and frustrated his employees, and most of them thought Whitehurst wasn't competent enough to run the business. But instead of blaming the issue on external factors, Whitehurst blamed himself. He owned up to his mistake and told the company why he made his decision. They then understood the rationale behind his decision. Not long after, many of his employees told him how much they appreciated his honesty and that he changed his mind about their go-to-market strategy. And that’s what ultimately earned him back their trust and support.

3. You understand the importance of team bonding.

Sometimes, team outings can feel like a forced way to bond -- kind of like the annual Christmas get-together with your cousins growing up -- but after a slightly awkward beginning of the night, you’re having a great time. And by the end of the night, you don’t really want to go home.

Solving an escape room or participating in a scavenger hunt can contribute to this fun, but most of it stems from bonding with your team on a personal level and learning about each others’ personal stories.

Sharing stories and having positive social experiences is the best way for a leader to develop trust with their team. Both of these things trigger the release of oxytocin, the hormone that helps us empathize with people, and it prompts us to help, relate, and care about others in the same way we do for our families. In other words, it's the best way connect.

Having genuine conversations about what you and your team are passionate about, your lifestyle, and career motivations will break down barriers and build your team’s trust with each other and you, their leader. And this personal trust is what you need from your team to passionately support your overall mission and purpose.

Every good leader should be able to be empathetic, right? Well, according to two Canadian neuroscientists, the higher you climb the corporate ladder, the harder it is to feel empathetic.

The part of your brain that triggers empathy is the mirror system. And whenever you see a person do something, it activates the thoughts and intentions that spark when you do the same exact thing. This helps you understand what motivates that person’s actions. But when you hold power over others, like in most leadership roles, the mirror system isn’t very stimulated, making it harder to place yourself inside other people’s shoes.

To stay on the same level as your team, consider trying a management technique called perspective-taking. If your colleague says something that frustrates you, take a step back and ask yourself why they took that position. How do they feel? Where is this perspective coming from? If you were in their role before, try to remember what it was like doing their job. Think back to your biggest fears and challenges. What made you feel threatened or insecure? Ultimately, perspective-taking will allow you to understand the root cause of your team’s problems and help solve for them.

5. You challenge your team.

During the 1988-89 NHL hockey season, Brett Hull led the St. Louis Blues with 41 goals scored. And after the season ended, he walked into his exit meeting with his head coach, Brian Sutter, expecting nothing but praise. But Coach Sutter didn’t give him any praise at all. In fact, he told Hull he needed to get better. Hull had the potential to be one of the greatest hockey players to ever live, but he could only be a Hall of Famer if he improved his work ethic. The next season, Hull arrived to St. Louis in the best shape of his life. And he almost doubled the number of goals he scored, with 72. The season after that he scored 86 goals. Hull was eventually inducted into the NHL Hall of Fame, and it’s all thanks to a coach who pushed him to train and perform at his best.

Like Brett Hull, everyone on your team can level up. Even your top performers. And to help them enhance their work ethic and skill set, push them to reach their potential and let them handle their own projects. They’ll be grateful for your guidance at the end of the day.

6. You don’t let your emotions influence your decision making.

Great leaders do what’s right, even if it causes a great deal of emotional pain. If they need to let someone go, even if they personally like them, they let them go. When they need to give constructive criticism to someone, even if they don’t want to hurt their feelings, they tell them what they need to improve on. The easy way out never pays off in the long term, and great leaders can blast through any anxiety or discomfort to do what’s best for their team.

Great leaders trust their people, especially with information. They know their team can sense problems in the organization. And since humans have a psychological bias that makes them more scared of ambiguity than risk, they make sure to provide as much information as possible about the issue and clearly communicate that they’re doing everything they can to resolve it.

Keeping things under wraps will only make their team feel anxious and unsafe -- if they know something’s wrong, and they know their leader hasn’t disclosed all the information, they’ll ruminate about the worst possible outcome. And this is likely to scare the leader’s team and make them lose trust in him.

8. You acknowledge and appreciate your top performers.

As a leader, you must know how to make your team feel valued. It’s one of the most important emotional needs to meet. If you don’t, your team will feel unhappy at work -- failing to recognize employees is one of the most common causes of employee dissatisfaction. To make them feel important to the team, happier, and incentivize them to keep improving, recognize and reward your employees for their accomplishments. You can does this in front of their peers, one on one, or even on Slack. This is also a way to inspire other members of your team to improve and earn recognition too.