How to Cultivate Psychological Safety for Your Team, According to Harvard Professor Amy Edmondson

Welcome to The Science Behind Success -- a blog series that explores the best ways to help our brains perform better at work. With psychological research and interviews with leaders in the field, we're showing you how psychology can help you overcome workplace obstacles and excel in your career. Because a little mindset change could go a long way. 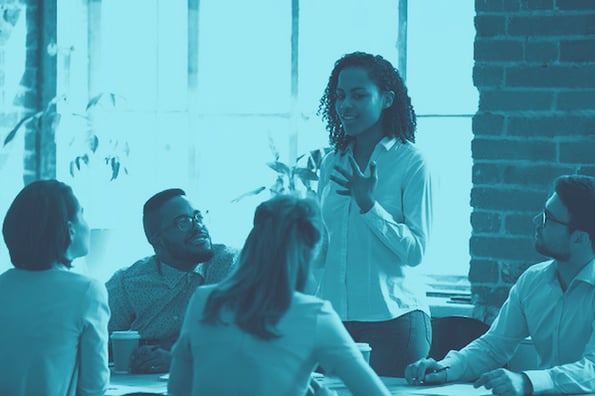 Let's start with a seemingly easy question -- why do some workplace teams perform better than others?

If you're anything like me, you're probably thinking, "A good team consists of people who feel their work is purposeful, and are motivated by similar rewards."

Alternatively, perhaps you're thinking, "A good team consists of people who are, simply put, good at their jobs."

In 2012, to answer this very question, Google launched an initiative known as "Project Aristotle". They gathered Google's top organizational psychologists, statisticians, and engineers, and asked them to study hundreds of teams at Google to figure out why some teams did remarkably better than others.

Ultimately, Google found one norm was more critical than anything else for making a team work: a concept known as "psychological safety".

You might've heard this term before. A simple Google search of "psychological safety" yields results from major publications, including The New York Times, Harvard Business Review, and Forbes.

However, it's relatively new rise in popularity is credited, in part, to Amy Edmondson, who coined the term in her 1999 research study on workplace teams.

But first, let's explore how Edmondson discovered psychological safety in the first place.

In the mid-1990s, as a first-year doctoral student, Amy Edmondson set out to investigate whether high-performing medical teams made more or fewer mistakes than low-performing teams.

To conduct her research, Edmondson collected survey data to indicate whether teams were high-performing or low-performing, and then compared that data to statistics on which teams made the most mistakes. Simple, right?

However, when she put the data side-by-side, she noticed something puzzling: her highest-performing teams weren't make the fewest mistakes, they were making the most.

How could that be possible?

Why were the best hospital teams messing up consistently, while the less powerful teams were making considerably less errors?

In her book, Edmondson describes one moment as a 'eureka' moment. "What if the better teams had a climate of openness," she writes, "that made it easier to report and discuss error? The good teams, I suddenly thought, don't make more mistakes; they report more."

Since her initial findings, Edmondson has studied psychological safety across numerous companies, organizations, hospitals, and even government agencies. She's a Professor of Leadership and Management at Harvard Business School, and her TED Talk, "Building a psychologically safe workplace" has been watched over 350,000 times.

Before diving into my interview with Edmondson, it's critical to note -- psychological safety isn't equivalent with kindness, as I'd originally suspected.

For instance, you might feel like your coworkers are incredibly nice to you. They ask about your weekend, remember your birthday, and even invite you for after-work drinks.

And yet, at meetings, maybe you still find it difficult to speak up. Perhaps you're nervous you'll look stupid or you've seen how closed-off your manager is to new ideas, so you figure, What's the point?

When speaking with me, Edmondson described a psychologically safe work environment as "one in which people absolutely take seriously and believe that it will be without punishment, without negative consequences. That they're able to speak up with work-relevant ideas, questions, concerns, mistakes, and problems."

"Simply put, it's an interpersonal environment where people believe their voice is welcome."

Psychological safety is about creating a space where new ideas are both encouraged and expected. It's about leaders who ask each of their employees for feedback and are truly receptive to the feedback they receive; and it's about any employee, whether entry-level or senior executive, feeling supported to voice when they've made mistakes, knowing those mistakes could lead to innovation, not embarrassment.

Ultimately, psychological safety isn't just a "nice to have" for team bonding and workplace culture -- it's a necessity for company growth and long-term success.

Next, let's dive into Edmondson's take on how you can enact psychological safety in the workplace, why it matters, and what might happen if you don't.

1. Recognize its importance to both innovation and growth.

There are some risks to not having psychological safety that are relatively obvious. For instance, your company might have a high turnover rate if employees are unhappy or don't feel comfortable bringing their authentic selves to the office.

But even more importantly, psychological safety is critical to innovation. As Edmondson told me, "Innovation happens in a psychologically safe environment, full stop. Without it, you're at risk for failing to innovate, which won't just jump out at you like, 'Oh, there was a big failure.' You know? It's the innovation that didn't happen that's hard to see at the time."

"But over time, the company becomes less relevant, less vital, in the marketplace because it didn't innovate."

Pixar is a prime example.

As Edmondson writes in her book, Pixar co-founder Ed Catmull "credits the studio's success, in part, to candor … when candor is a part of workplace culture, people don't feel silenced."

But Catmull did more than encourage candor -- he institutionalized it. For instance, he created a process called "Braintrust", in which a small group meets every few months to assess a movie and provide feedback to the director. The iterative process forces employees to speak openly about what's working in a movie, and what isn't.

The Braintrust has rules -- for instance, feedback must be about the project, not the person. The filmmaker can't become defensive, or take criticism personally. And comments are merely suggestions -- not prescriptions -- and must come from a place of empathy.

Creating a safe space to iterate, share ideas, and brainstorm is critical, but it's equally vital that the leader demonstrate psychologically safe behavior themselves. For instance, Catmull demonstrates honesty and humility in his own language, admitting, " … early on, all our movies suck."

By openly showing his employees he believes there's plenty of room for improvement, Catmull makes it feel ridiculous not to share ideas.

In the early 1990's, Pixar implemented a Braintrust during the creation of Toy Story. Due in part to the Braintrust, Toy Story became the highest grossing film of 1995.

I asked Edmondson whether she believed creating a psychologically safe environment requires structure and systems -- like Pixar's Braintrust -- or whether it can be cultivated simply by encouraging leaders to remain open, receptive, and honest.

Edmondson told me your company needs both. "Leadership has the job of modeling behaviors that work, that matter, but also putting in place structures and systems that make it easier for people to bring their ideas forward, to bring their concerns forward. Ultimately, it's really both. There's the behavioral dimension of leadership that is very important and powerful in shaping others' behaviors, but there's also the wonderful structures and systems that make it just a little bit easier."

Here are a few tips for leaders looking to adopt psychologically safe behavior:

Additionally, you might create structures and systems by providing rules and regulations to your meetings. For instance, if you're conducting a brainstorm, there are various opportunities for you to mix up the format to achieve honesty and openness.

For example, you might ask your employees to write down their suggestions ahead-of-time, anonymously. Alternatively, maybe you pose a question before the meeting -- "In today's meeting, I'd like everyone to come with the answer to this question: 'What's one way we can improve our Facebook campaign before launch?'"

Ultimately, it's critical you create a space in which employees feel safe sharing new ideas, even if those ideas go against your team's status quo. If you don't, you truly risk losing out on long-term growth for your team, and your company.

Psychological safety can vary team-to-team within an organization. In fact, Edmondson found the teams she studied in the hospital back in 1999 varied drastically in terms of their levels of psychological safety.

If you're a senior executive, it might be difficult to determine where strengths and weaknesses lie in your organization in terms of psychological safety. It's best, then, to measure it objectively.

To measure a team's psychological safety, you might ask team members to take Edmondson's survey, with questions like the following:

To measure her responses, Edmondson uses a seven-point Likert scale (from strongly agree to strongly disagree). For additional tools and resources, check out Edmondson's tool kit, Is Yours a Learning Organization?

4. Make psychological safety a priority for your entire organization.

In Edmondson's book, she describes a real-life scenario with Wells Fargo as a prime example of the risks you run as a company by not implementing psychological safety measures.

Here's the gist: in 2015, Wells Fargo, a U.S. bank, encouraged employees to cross-sell a minimum of eight different financial service products to existing customers -- they even had a slogan, "Going for GR8".

While a great idea in theory, it was impractical -- most Wells Fargo customers couldn't afford the eight different products. However, leadership continued to push their employees. There was no space for openness or candor -- leadership didn't encourage or welcome feedback from their employees.

Instead, as Edmondson writes, people believed they'd be fired if they didn't hit their quota.

So, ultimately, employees felt they needed to cross an ethical line. They began creating fake customers, or lying to customers to trick them into signing up for new products.

All of which is to say -- having psychological safety isn't just advantageous for long-term company growth. It's also an absolutely critical component for ensuring you don't run into major business failure.

Your boots-on-the-ground employees know your customers. They have perspectives and opinions you might not. Ultimately, it's vital your leadership team create a space in which these employees feel safe and encouraged to bring forward their opinions, suggestions, and disagreements.

You'll have a happier, healthier, more productive company as a result.