12 of the Sassiest Brands on Social Media

Brands use social media for a lot of things: to distribute content, to share news, to provide customer service.

And sometimes, brands use social media for jokes, burns, and unmitigated sass.

When brand accounts share personality and humor on social media, it's delightful -- and it captivates the collective internet. It's funny when brand accounts use social media like the real people behind the copy, and it breaks up the monotony of the negativity and mistrust that characterizes a lot of people's feelings about their social feeds.

So we've rounded up 12 brand accounts to share the burns, the jokes, and the GIFs that make these sassy profiles some of our favorites online.

12 of the Sassiest Brands on Social Media

No list of sassy brand social media accounts is complete without MoonPie -- the vintage snack cake that started garnering a lot more attention on Twitter for its quirky insights -- and burns -- after launching a Twitter beef with Hostess Snacks over whose treat was the official snack of the solar eclipse in the summer of 2017. 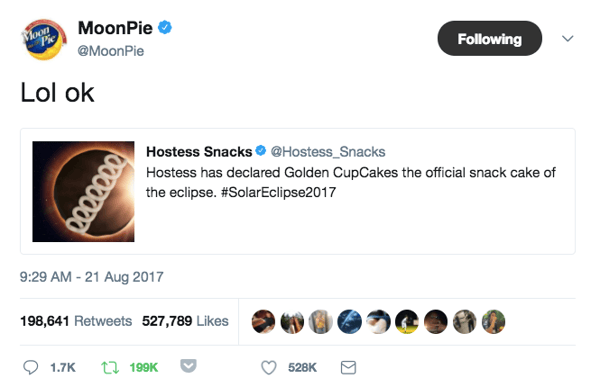 MoonPie is never afraid to wade into hotly contested debates, like the still-raging critique of Twitter doubling its character limit to 280.

This account has been asked to test Twitter's new 280 character limit, but as a 100-year-old brand, we believe our fans most enjoy traditional tweets with brevity, so we declined. We hope to continue to provide a fun, positive place to discuss MoonPies moving forward. Thank you.

But remember, it's not all fun and games -- MoonPie's witty social media manager has feelings, too.

First of all I have feelings

... as in, Hamburger Helper. Helper likes to wade into the social media muck by savagely burning people back when they try to make fun of the quick and easy meal brand -- like so: 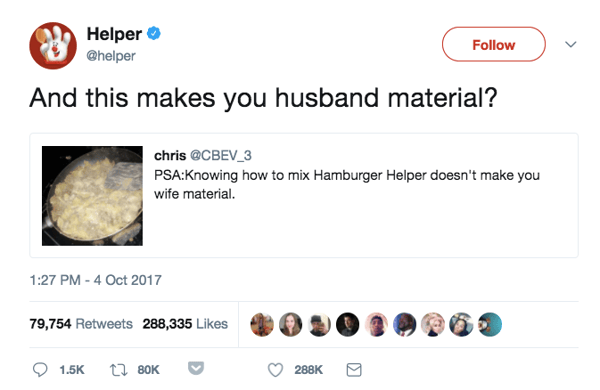 Simply put, Helper tells it like it is -- and helps followers confront critical conflicts within their families and their kitchens. 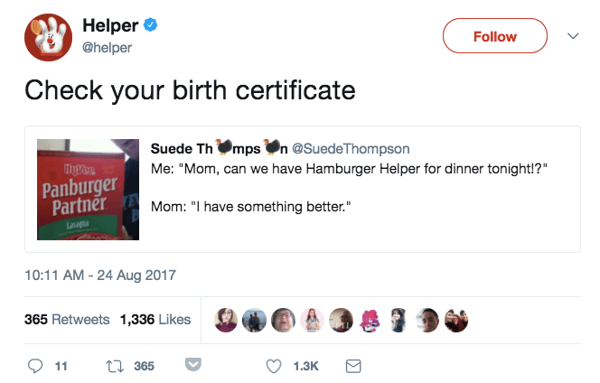 I don't eat hamburger, but even I can get on board with this level of hilarity from a brand on social media.

Tesco Mobile is a mobile phone provider in the United Kingdom, and from what I can tell from customer complaints on Twitter, its cellular coverage might not be the best in the biz. It makes up for dropped calls, however, by coming back with hilarious takes and jabs in response to the haters. 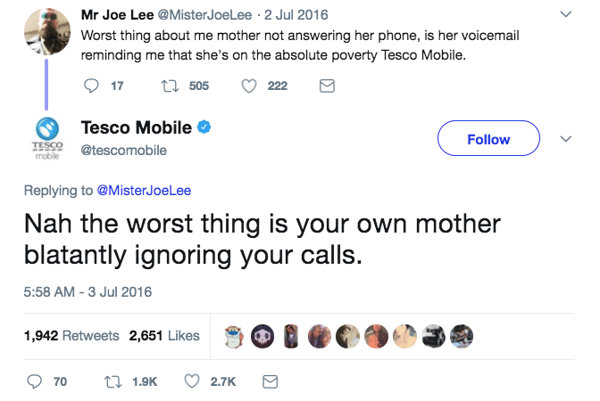 Seriously, don't make fun of Tesco Mobile lightly -- be prepared for them to come into your mentions with a fiery reply that mocks everything about you.

Photo of the Day: Happy #HugABearDay! We don't suggest hugging any real bears. Leave that to the professionals, like these polar bears. pic.twitter.com/7bp2BjCu0G

Which is why it was so unexpectedly hilarious when, after the Pittsburgh Penguins hockey team tried making a joke about the average height of a penguin to contradict Discovery's estimate, Discovery came back with a vengeance: 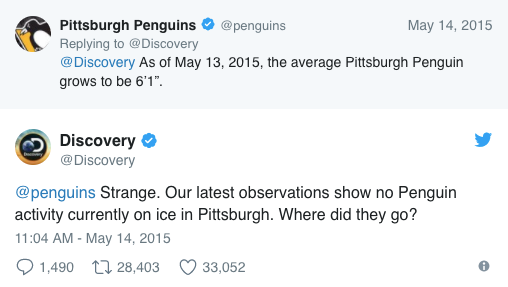 For context, the Penguins had just been eliminated from the Stanley Cup playoffs ... ouch. We hope they had some ice on hand for that burn. 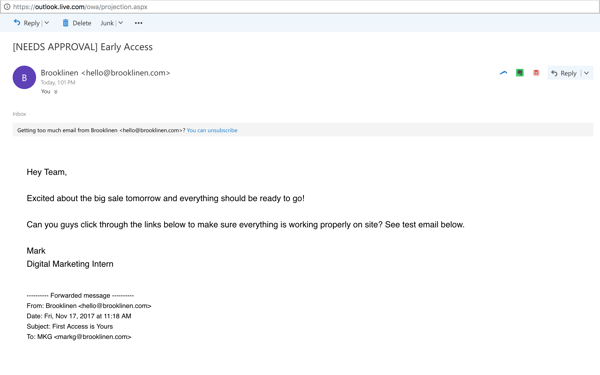 Our team gawked at the email, lamenting what we were sure would be a swift end to Mark's digital marketing career -- until we did some investigation on Twitter and found this incriminating tweet.

We realized we had all been tricked by a clever marketing ruse designed to drum up attention -- and give subscribers early access to Brooklinen's sale. 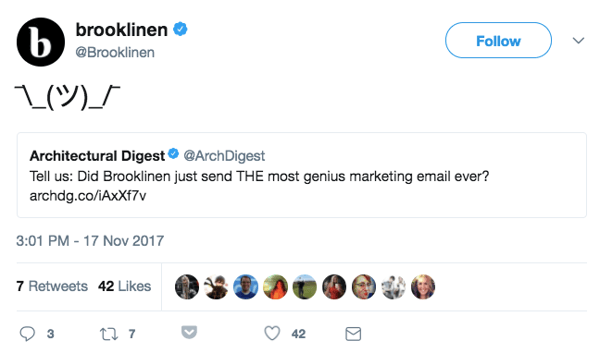 Denny's got in on a popular Twitter meme that tricks the viewer into repeatedly zooming in on spots on a picture to read secret messages -- try it for yourself.

zoom in on the syrup pic.twitter.com/omRBupjrXq

waffles in 2017 will now have stories pic.twitter.com/7ouQS75PSq

But they always find a way to infuse breakfast foods into their sassy tweets and memes -- like this one.

you've heard of elf on a shelf now get ready for pic.twitter.com/NLYRvUw90n

Merriam-Webster uses Twitter mostly to share interesting trends and articles about unique word definitions -- but most tweets are usually accompanied by a very niche GIF or reference to pop culture, like this one:

The dictionary's social media manager also likes to subtly comment-without-commenting on current events taking over the news by tying it into the context of word definitions -- see what I mean?

📈Both 'collusion' and 'indictment' are among our top lookups today. https://t.co/zSfW3Cf2rK

What's the definition of the word "shade"?

Charmin has a hilarious series of tweets called #TweetsfromtheSeat about -- you guessed it -- sitting on the toilet. Its tongue-in-cheek bathroom humor will definitely make your day -- and make you remember Charmin the next time you go to pick up some TP.

#WithoutMyMorningCoffee tweeting from the seat would take a lot longer. 💩

But make no mistake, Charmin shares important news stories in its vertical, too.

If the #MadPooper turns herself in, we'll give her a year's supply of TP to help with her "runs" 💩 #EnjoyTheGohttps://t.co/GgEAyYp6aM

Who says 💩jokes are just for kids?

Wendy's became famous this year for starting beefs (get it?) with anyone and everyone it could on social media. It all started with this innocent tweet, advertising its policy of only serving fresh beef.

Our beef is way too cool to ever be frozen. 😎 pic.twitter.com/QuXECJtlq5

This Twitter user tried to start a Twitter battle with Wendy's, and clearly, they had no idea what they were in for: 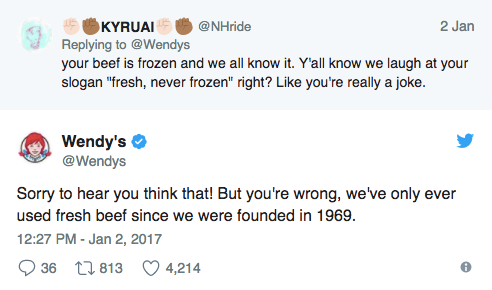 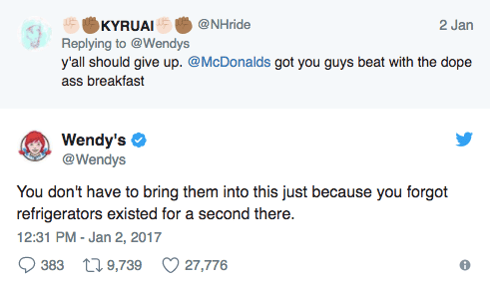 ... its social media sass is best reserved for people (and other restaurants) that dare hint its food is anything but #1. 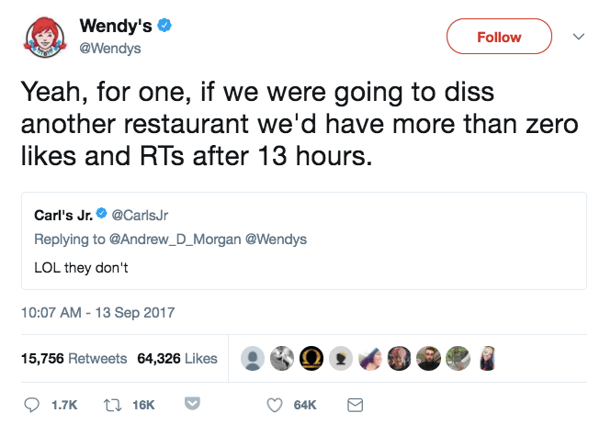 I'm from a little town called Portland, Maine, so when I started seeing news stories about Bangor, Maine's charming Facebook account, I was overjoyed.

You can click to expand this one, or you can just read my favorite line:

"It's your day on in the comment section of the world's most marginally famous Police Department Facebook page. We heard that Zuckerberg reads it (that's a lie)."

"For those of us in Maine? We will soon have the distinct privilege of leaving for work in the dark as well as returning to our homes in the dark. I also turn the analog bathroom scale back 10 pounds this time of year...or only look at it in the dark. Might as well make this enjoyable."

These updates all contain stories, warnings, and advice for Bangor, Maine residents -- all wrapped up in hilariously-written statuses.

"It should be noted that cats tend to come down out of trees when they make a decision to do so. Pleading with a cat to return to terra firma is done purely to please those standing around and looking up. It's a public relations move which makes people feel warm inside, but cats are cats."

BuzzFeed has nailed creating different profiles and outlet for its fans' myriad interests, and BuzzFeed Books focuses on news and stories in the literary world.

For the most part. The account had some words (but only a few) about the expansion of Twitter's character limit:

if you think 280 characters is exciting, try reading a book

I love Pop-Tarts. (Did you know the unfrosted ones are vegan?) I also love the way the brand refuses to let anyone disgrace its name with unconscionable food preparation choices -- like this one: 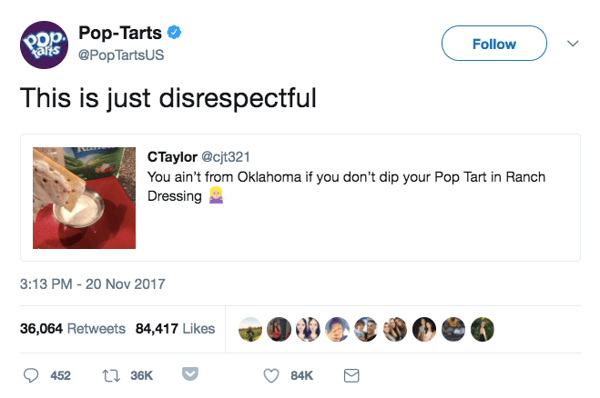 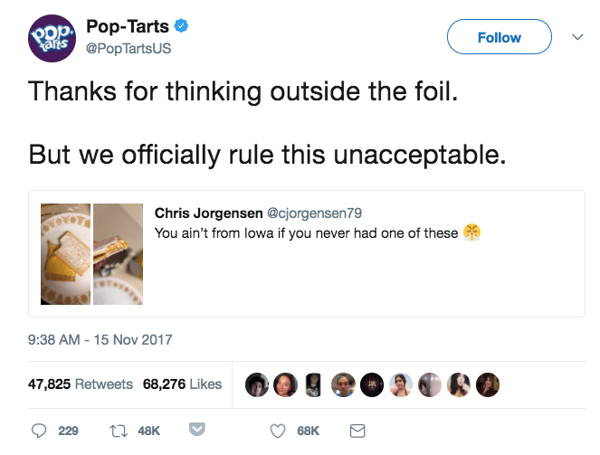